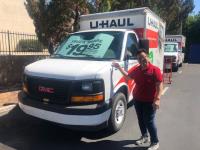 When I came back I refilled the EXACTLY to the 1/4 line where it was when I picked it up. The picture of where the gauge is shown is completely inaccurate. I'm very unhappy that I was charged for the fuel and the fuel refill service and will be contesting.

First let me say I took the truck an extra day I only made a contract for one day. The second day early morning the owner called and requested if I can return the truck by 1 p.m. because he has a client that needs it. I told him I am not sure but I will do everything to be there at 1,00pm. He then stated he just passed my house and saw that the truck door was open and there is no items inside so I'm not using it and he can come and pick it up personally. I asked him if he is spying on me, I then hung up.

Person was CLUELESS as how to execute the return. Was not accommodating. Did not have computer skills. Kept saying computer was slow...excuses,,,,did not want to help. Always avoiding so she does NO WORK. Made our return a NIGHTMARE. So we did finally have to do it on our own.

We were charged for 4 days. We only rented it for a total of 6 hours!

I was there for an hour with the rental agreement filling it out.

When I had the â€œcollect keyâ€ screen, I showed them and they didn't know what to do. They tried to figure out my reservation and everything for more than 20 mins. I ended up not getting done what I wanted that day and getting more delayed. I returned within 3 hours because all my plans got messed up. Thank you! I would not hire again!

Very simple. Patel was awesome. He made the U-Haul checking experience smooth and easy!

My main man Patel provided me with excellent customer service and made the rental experience a breeze. Please be sure to recognize him for his hard work and dedication to an additional task associated with his responsibility as a gas station attendant.

The location has no drop-box for keys. The location is dangerous after hours. I was there at 1AM to return truck and was harassed by a man that claimed to work there. The location was closed. After that, the LAPD showed up and thought I was breaking into the location. I was told to lock the keys in the glove box. The officer was friendly but concerned. I didn't know how dangerous the homeless population is in that area. I feel the need to bring this up because I thought this location was supposed to be safe. Thank you.

I picked up the truck at a Mobile gas station. I returned the truck and parked it in a spot different than the spot I picked it up in. The spot I parked it was similar, but just on the other side of the small lot. The person working at Mobile insisted that I move it (it wasn't blocking anything) and when I refused threw the key back at me and told me he was not accepting the truck. I left the key on the counter.

The attendant was alone and slow in the process of checking out the truck. All customers for the Mini Mart were addressed between he checking out the truck. Upon return, I filled the tank with gas and while my wife was clearing out our stuff from the truck I went to close out. The attendant wouldnt start the return process until the truck was parked on the other side of the lot. He also gave me a hard time about the gas tank as the I took it with just under 1/2 a tank, which is where I brought it back, but the receipt had a big circle around the 1/2 mark on the page. I told him it was just under 1/2 when I took it and if I only traveled 10 miles and put in 5 gallons there should be more than what I took the truck with. He stopped arguing with that statement but was short and cold with me overall.

This whole experience was the worst rental experience I have ever had with your company and I doubt I'll return because of it. There should be plenty of customer notes and recorded calls from each time I called in. Not going over it again.

My reservation was changed 4 times, to different locations because of availability. I would work on verifying truck is available before allowing customer to book the reservation and begin making travel plans.

Honestly the quickest/easiest U-Haul transaction I've ever had. Very kind and great service.

Im waiting to here back from a someone/ supervisor. I was charged at this location without being told how much & also, over charged from what I was Told. He said I don't know call them. It was hard to understand him & he did not know what he was doing! It took a long time to get the truck. He also charged me for insurance without asking me! I have rented a lot from Y'all over the years but, this was bad!!

Inside the truck when I picked it up was dirty and I took pictures. when I drop off the car they charged me $25 for cleaning. This is bullshit.

First truck the fuel line was disconnected and gas went all over the ground. Good thing we decided to gas up at the pick up location and discovered it quickly. We were able to take another truck without too much delay, but it could have been a big problem.

I DID NOT GET THE 48 FURNITURE PADS THAT I PAID FOR - THEY ONLY HAD 6. THE WOMEN AT THE GAS STATION WERE VERY HELPFUL, BUT I WAS NOT HAPPY WITH UHAUL.

make sure the equipment is available when reservation is made

Was supposed to be ready without going to the office, took 15 minutes to find the keys, wrote my info and mileage on a piece of cardboard ripped off of a box, didn't inspect the van for any damage, van smelled like smoke, then called my alternate number and spoke to my wife telling her that technically the van was stolen because they neglected to copy my credit card info. If I wasn't even supposed to check in why did they even need the CC number. The van was paid in advance through the web. I will never use this place again.