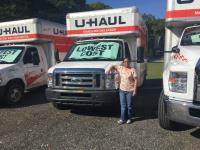 The girl that did the rental was very friendly and courteous. The uhaul was great and got the job done. When returning the uhaul, a lady came out that was very hard to understand. She told me to fill up the gas tank. I explained the gas wasn't on full when I received it and only filled it up to where it was when I got it initially. So we go to handle the complete transaction and she tried overcharging me. I paid cash for the gas! I left a $100 deposit. The rental was for $19.95 a day plus $0.79 mile. She tried charging me close to $110! I said umm that's not right. $19.95 a day and $0.79 a mile and I went 82 miles only comes out to like $89 and some change. She said I went over the miles I started I was going to go and that's where the extra charges were. I said there's no way and no hoe. Look I called numerous times to return the truck the same night and no one answered the phone. She said what times. I said I started at 9pm and called all the way up to 930pm and no one answered which I thought was strange cause the website says you're open until 10pm. She said no ma'am we're open until 11pm. I said well I tried calling for a half hour and no one answered which caused me to put an additional 23 miles on the uhaul. Check your caller ID and gave her the number I called from. She said oh I see now, I don't know why she didn't answer. I still explained to her that there was no way my total could have been around $110. When I calculated the daily and mileage and tax and only came up with $95 and some cents. I explained I have no reason to lie to her about the gas (which I pumped and paid cash for), about calling and trying to return the same night. It was just craziness to me but we finally got it settled.

The agent that was at the location was difficult if not impossible tounderstand and she got the wrong number on the agreement.

The location was good and the staff welcoming

Kinda creepy place. It was hard to find a good place to park that wasn't blocking all the other uhuals

Was not a real problem, but we were unable to use the ramp. It was stuck.

The store owner COULD NOT speak one word of English causing me to leave and only returning after one of your employees asked me to go back!

Truck rigged so you cannot see mileage. Drug parafinalia on grounds. Could not get receipt. Had to go around counter and take pic of their computer. Over charged for amount of miles.

Rude and didn't have a good cl

I was scheduled to pick up at 8:00pm on Friday May 22. I could not get the truck because it had not been returned. I was told call later to see if it had been returned . I had to get it the next day. There were no hand trucks there was mud in the seats and one of the tail lights was out. This is the 2 nd truck I had rented in the past two months It was way to much money for what I got.

Oil life was at 0% and on second day it started shaking while sittkng still and check engine light came on. Maintenance needs to be kept up better on trucks

No help with the trailer during pickup. The inside and outside of the store is dirty. The lady during check in did not know how to do it properly and it took forever.

U done great you'll treated us fair thank up

The location needs to employ someone more fluent in english. This is only applicable to the person renting the truck to me. When I return the truck a very nice young lady who spoke good english helped me.

This location is a MESS!

People was rude and did not explain everything to us

Everything was on point

I had to wait over an hour to get my reserved U Haul,the lady was very rude to us aswell and there wasn't as much gas as said.

Truck was dirty and gas tank empty. Management argued that this was proper protocol and she hardly spoke English. The entire process of pick up should have been fast and simple as I had already done everything needed online prior to going. We were 30 minutes delayed with our schedule because of their lack of efficiency and communication.

Self serve kiosk to check in for pick up and return

The truck's check engine light was on. Trash was in the back. The retailer try to force me to purchase premium gas.

Initially the rep was unable to input my info into the system. Asked me and my son to come behind counter to see if we could. She was more concerned with waiting on store customers to help. The equipment my son had to put on my car. She did not come out of the store to see what was going on. Thankfully he works at an automobile dealership so very good at what he does or I would have been lost. Also advised her that a light was out she didn't say a word. Worse experience ever.