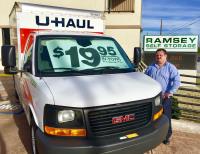 Easy pick up (I reserved 10 days in advance). Easy return as you follow the instructions in the email concerning â€œreturnsâ€.

Very unprofessional. I'd never rent from here again. And I don't recommend it for anyone else. The gas tank and mileage we're marked incorrectly and even after talking to the employee I was charged over $30 for the corrections. The employee was very rude and unhelpful to me and the woman in line ahead of me (she was told to come back in two days for another truck because the one she rented wouldn't start, they had other trucks out there but said she couldn't switch to a different truck because she's not a corporate account) . The employee obviously didn't want to do his job that Saturday as he kept exclaiming that he's the only one working today and he's closing early today at 3pm. I will never come here again.

Employee was very rude . Was more worried about his YouTube videos than assisting the customer

Sadly at this location, the person working at the counter seemed to be put off by our presence and really did not want to help us after we had advised him that your main company had gave us this location to pick our truck. He told me and my wife that our reservation was not at his location even though we explained to him that it was. He told me to try another location down the road. Just as we were getting ready to leave for this other location, our rental had arrived. He seemed like we were bothering him from taking his break or something. Very unprofessional in his attitude and his service. I would not recommend this specific place for any rentals.

The 24 hour pickup system is flawed as the app does not give the opportunity to see the current mileage and fuel level at pickup time to ensure that it's accurate. It was not, it was off by 50 miles, but the location made it right.

Self storage staff Are always pleasant to do business with

For using U-Haul for my very first time it was the worst experience ever the man gave me in accurate information over the phone he gave me one price and then when I got there it was a different price. Checked the truck back in before it was due and he never checked the truck in his computer so the kept the hold on my bank account (like a good $150 dollars). I had to call him and he wasn't answering his phone had to call the main office and they had to hunt the man down and the hold didn't come off until 3 days after we checked the truck back in and he told us the remaining balance would be there right away which was another lie. So disappointed with my whole experience. I would NEVER use this company again.

I was way overcharged on the rental. They lied about the gas being passed the half mark when it was under the half mark. I will never ever do business there again

Manager was rude and spoke to me as if I was a child. He made derogatory comments about me in Spanish to an associate of his that was standing next to me. I understood everything he said and I needed the rental at that time because they were about to close, so I said nothing. He over charged me when i already had a locked in price of $19.95 as an upgrade and instead of .59 cents a mile he was charging me .99 cents a mile. Also the mile he on the speedometer read that I had already drove 28 miles then what our receipt printout read and that was when I got home from just renting. I live less then 2 miles away. I don't get how this man this business can get away with this.

The truck was late upon pick-up and everything after that was fine until I received a second charge on my credit card two days after using the rental because I "used more mileage on the truck than I said I was going to use". I understand why they charged me but a heads up would have been much appreciated; they could have simply called me a said "Hey, you used a little more mileage than you estimated. This means that we're going to have to charge you an additional $5.00. Is this alright?" Communication with the customer is EVERYTHING and them simply pulling money from my card without telling me, no matter the amount, made me feel very vulnerable and un-trusting of this company. I will not be utilizing again.

The equipment was not clean inside was not cabin as well as back also when putting gas in the tank the pipe or the tank leaking when the truck was given back they had to put off road to repair.

Vehicle as ready for pick up at agreed time, Friendly person very helpful.

Very slow check in and check out even though I reserved the truck an hour in advance. Also the truck was dirty.

Front desk clerk was extremely rude and had horrible communication skills. He talked over my boss the entire time she was trying to ask a question and he was being a total jerk. He insulted her and i took that as disrespectful he wouldn't even let her finish and then was arguing and she wasn't and was the only one talking because he assumed she was going to say something that was nothing close to what she was even trying to say and he did not even let her get an entire sentence out of her mouth before he did. I will never go back there again and i dont care if i have to drive 50 miles to get a uhaul i will make sure my friends and family and everyone i know never does business there as well. My family is huge and we have been in cabazon, morongo rez and banning and beaumont and dhs and yuciapa for the past almost 100years...i am related to everyone. Trust and believe i am going to write horrible reviews in online so everyone else does not have to deal with this man insulting and disrespecting them. my boss was very upset and to top it off he shorted her $10.00!! i will be posting the receipt pictures online with my poor reviews and to the newspaper as well. I hope he does not have a job very long because he is not doing your business any good that is for sure. He is hands down the worst customer service person i have dealt with in my entire life and i cannot believe someone with his foul attitude could even get hired anywhere! shame on you for allowing him to deal with the public that is already going through stressful moves and is only trying to obtain a service and pay for it. If people are polite to you there is no reason to be so ill mannered and rude. It was way out of hand and i hope you have cameras in there and get rid of this guy because everybody is going to know how he treated my boss and her family is from her just as long as mine. Letters are going to be written and blogs will go out about the (i cannot even come up with a word to describe) treatment for no reason other than he wanted to leave and hates women. thank you for your time. Charlie

Nothing. The representative was very helpful and pleasant, making the entire experience great.

Take a picture of mileage on odometer before your leave, otherwise employee of facility will add 5miles therefore charging you $4.95 more. Also, have employee check key drop box for keys daily, and log the rental back on premises Monday, if the factility is closed Sunday, otherwise you will get a phone call 3 days later asking for the rental back, when it was brought back same day.

I am used to going to a u-haul store. When I got to this location, I was told to not over fill the gas just put enough to get to where it was When I picked it up. I asked if there was a senior discount. He just chuckled and said no. The number of miles were 2011 before I moved the truck. He has a different lower number. The gas in the truck was a little over 1/4. I put in 15.00. I have the receipt if you need it. Every dollar to me right now, is important. I will not use this particular place again. At the stores they have always been to the truck with me to write down, mileage and amount of gas. I am very disappointed in the service he gave. Thank you for the opportunity to use u-haul. I have moved 8 times in California and have always used u-haul. The guy there didn't really seem like he cared one way or another.

Improve customer service; do not add insurance unless we specify we want it!