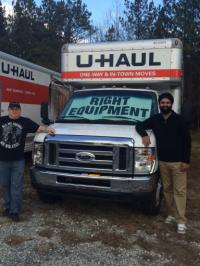 The latch was stuck and it took 2 hours to get it in hitched. The location had no cell service and I was alone in dark location trying to return a trailer that I could not unhitch.

Long wait in the store even though I completed the check-in well in advance. Also, surprise credit card use charge I was not made aware of at any point in the process until I received my final receipt. All four tires on the trailer required inflation prior to use and one of the tires required plugging. Overall, not the expected level of service from U-Haul.

Andy was super nice and helpful. My only complaint is that U-haul didn't have the truck I needed at the location I wanted to pick up from. Of course they don't give you extra miles for having to pick up further from your origin. Other than that everything went well. We got a practically brand new truck and like I said Andy and Super A Gas were great.

Great service. Nice to be able to rent a truck so close to big canoe. Very easy check in and out. Will definitely use again when needed

They double charged our card AND added an extra fee (even though we returned it with the gas over the level it was given to us. I have been calling for two days and no one will answer and there is no voicemail. At 6:30 pm, a man picked up the phone but said no one was there to help and to call back at 9 am. I am becoming concerned about the safety of the charge card now. Please help

Super A Food & Gas...Uhaul truck Windshield was so dirty it was hard to see when the sun shined in. Didn't get all of the equipment I requested..absolutely no help there...had to set up everything on the phone with the owner. Would NOT use them again.

This location really doesn't have personnel to help with equipment, but it is convenient for me, so that makes up for any issues with turning in equipment.

I called and asked about renting a car trailer, the representative said yes he had one but it was at a location â€œless than fifteen minutes awayâ€ and to come in and file the paperwork. I got there and spent 45 minutes waiting helping the representative learn how to use the software. He entered the tow vehicle as a Honda Civic even though it was a ridge line and kept trying to resubmit the paperwork even though it (correctly) said a civic could not tow my car. After I finally got the contract he gave me the location to pick up the trailer. It was almost 30 minutes from the first location (not 15). Had I known it was so far away I would have just driven there initially. I picked up the trailer, moved my car and returned it to the first location (as the representative had instructed me to do) around 8:45-9PM and went home. Only to have the second location calling my phone this morning threatening to charge my card because I â€œhad not returned the trailer by 11:30PM yesterdayâ€ Please do not use this place. The time these morons will waste is better spent driving to a better u-haul location.

You moved my location then charged me extra mileage even after you gave me more mileage. And I had to re enter all of my information that I did previously online. The reservation time was set at 8. The place didn't even open until 10 so that put me behind schedule. I want a refund but you don't have a phone number to call.

had a truck reserved and also had a confirmation. got there and my truck had been rented to someone else. struggled to find another.

O ordered packing blankets and they were not in the truck

When arriving to return the truck I spent atleast 20 min with the guy but he was clueless so I called the uhaul customer service explaining to them that I had dropped the truck off but for some reason the man could not get it put into the system. The Uhaul CSR Informed me that the systems had been down but would notate it in the system the truck was returned on time. Then this happens Today UHAUL Charged me $315.76 because the guy at Ballground charged us for 5 days when we returned it Saturday Feb 24 at 10am. Now thanks to y'all my account is going to be negative. I hope I never have to use Uhaul again. BRUCE E MOORE

Attendant was very courteous and prompt. Transport was there ready for me when I said I would be there. I would rent from this location again.

don't have your sales person tell you its ok to drop off at a different location then call you 2 hours later and tell you no. it has to be brought back to the his location which adds another day to my rental because it was late, and the extra miles , and the fuel . I will never use U-Haul again.

Didn't know how to answer questions on Tow DOLLY use or attachment. Gave us a handout and directed us to a YouTube site which was very helpful.

Knew what they were doing.

I reserved a 10 ft truck online for 4pm pick-up on 7/28/16. I drove 30 minutes from my home, because that was the only store I could reserve a 10 ft truck. I get to the location at 4:02 PM and the office is closed. I called the # and someone came back it took another 40 minutes. Finally get to fill out paperwork, I completed online check-in to speed up process. My reservation could not be found, the only rental they had was a 20ft truck that was reserved. They called and found another vehicle which was another 20 minutes away. For a easy online process, and check in, I was disappointed with the pick up of the rental and would have to think twice before recommending UHaul rental.

Everyone was very nice.

Not really a lot there to choose from