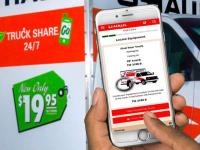 Facility is a little hard to get into with anything but a car. Very tight quarters. Equipment was very dirty on the outside. Cab was clean.

I called to change the truck size and they said no smaller truck is available yet when my sister called to get a small truck for herself after that she was able to get one. I ended up paying almost $400 for the truck I didn't need. I was asked about purchasing insurance and I said yes. He didn't give me any options of different types of insurance. We got hit a rock chip and now is told we have to pay for the windshield because the insurance I've â€œselectedâ€ doesn't cover windshield. ?!??? How would I know what insurance covers/not covers if you didn't tell me or give me any options?

The front desk workers were great! Very helpful and friendly. We will use this location again.

Staff was always informative and took care of all of my questions. Thank you. D

Communication within the staff.

I reserved my truck days in advance, but when I arrived at the location, the reservation showed as cancelled. The representative we initially dealt with was great, and he hit the "un-cancel" button, which he and I were both surprised existed. He had to handle someone else, and had another young guy (seemed new) take over, and this guy said we had to return the truck by 4pm even though my reservation was for 7 hours and it was noon. He also did not know how to do anything and was asking for help throughout the transaction. We had to do the move that day, so there really wasn't any other option, so we moved forward. When we got out to the truck, I asked him about the furniture dolly I had reserved. He stated that he had not bothered to look at my reservation, so he didn't know what was on it, and asked me to give him my printout. I did,and he said he didn't know where they were but he would be back. He came back a few minutes later, and I was informed that they were out of them. My husband opted to take an appliance dolly that was sitting out in the walkway, because it's better than nothing, and the guy said that was fine, but we were not thrilled. We had already been there 45 minutes and at this point we were burning daylight. This item made it much harder to move what we needed to than a regular dolly would have. The return went smoothly at least, got there right at 4, I waited inside for a few minutes, and the representatives inside were running back and forth and leaving the desk unattended to help other people, so instead I used the online return, took pictures, and just dropped the keys in the slot. I'll never use that location again. I've used U-Haul a bunch of times, and never had such a hard time with them as I did that day. I'll use another location if I need them in the future.

This is the absolute worst customer service I have ever received. I have been billed incorrectly, I called the store to correct this issue and spoke to Brandon. Brandon was rude, unprofessional, and unwilling to help my situation. When I asked to speak to a manager instead, he told me she's not there and won't know when she will be back, saying sorry about you and hung up on me. I need someone from Uhaul to contact me immediately. 918-640-1366.

I was charged for 13gal of gas even though I put gas back in it. I'll be using a different rental company in the future

$80 for three hours is pretty far from reasonable.

Keep doing what you're doing.

Great service, people working seem to enjoy their job. Everything was easy & handled in fast service with a great attitude

The guys were great. They did it all

Employee was not wearing a mask. They completely ignored all the information I filled out online for the reservation and had me tell them the info again, across the desk. Another employee was extremely put out that I asked to change the phone number on the account, but it took them about 5 seconds to actually do it. The last time I used this place, they locked up for the night and blocked in the truck that I was supposed to use. I was told by the store employee to just drive over the curb to get the truck out. I will not be using this place again, but I also have no plans to ever rent u-haul again if the employees face no consequences for failing to wear a mask and helping spread a pandemic that has killed my friends.

I did an online check in so I wouldn't have to go in. The guy insisted that I had to go in. Said online checking didn't eliminate having to go in. I had to go through everything just like I had just walked in off the street. Had to pay again, upload my dri ers license again and had to pay again. Terrible experience. When I brought the trailer back, he told me I had to wait. He was washed a truck!

I reserve a car hauler using online reservation. We have a corporate account. I reserved it at one location but when I arrived it was already assigned to another customer. They assured me this location had the trailer and sent me across town to pick it up. When I arrived, got to the counter to check in, they in fact did not have it. Fortunately the gentleman was able to set me up with something similar. This saved my day. I feel that if your system could communicate in real time between all locations this sort of thing would not happen and it would improve overall customer satisfaction. Secondly, maybe they could call ahead to verify verbally.

limited parking space or parking lot is blocked by trucks.

It turns out my car wasn't chained down. The technician at the drop off said I was lucky that my car stayed on the dolly.

Keep the same personal, no lines and they were very professional

The staff was friendly and very helpful. The rental process was quick and easy. So was the return. No complaints what so ever.