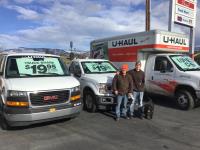 Have the promised vehicle available when and where it's supposed to be.

I was charged for a larger truck than I rented, I think. I rented a 15 foot truck and thought the rate was $29 for the day but the invoice lists a higher rate. The employee there was great and professional. There must have been either a miscommunication or I was accidentally overcharged.

It would help if the employees were ever actually there. The store and entire site is filthy and sketchy. People we're living in vehicles a few feet away from the truck we rented.

Tail lights and brake light (right side) had a short - sometimes worked and sometimes did not work.

The outside of the truck was really dirty and the inside was dusty. I was expecting a nice clean ride and was disappointed when I had to wash it myself.

I was picking up the truck and wanted to pick it up at 1:45 pm. I could not pick it up because the office was closed, after that I called the phone number that was written on the door, the person who answered him said that he left for lunch and would only be at 4 pm, I told him that I had reserved the truck for 1 : 45 pm, he replied that he could not help. after that I turned to those support, they promised me that now a person would come in 25 minutes and give me the keys, no one came in for 15 minutes, I called again they said they would come at 3 pm, then they accused me of calling them often and that it was not their problem, in the end the man arrived only at 3:40 pm and said that the truck was generally open and the keys were inside ... are you serious? I rent trucks almost every week but never had such a disgusting experience. and yes, when I booked the truck, it was written that U-Haul guarantees the reservation and if something goes wrong it will refund me $ 50. where is my $ 50? please reply to this message and take action.

The return location is a bit confusing. A bit of improvement in signage might go a long way.

trucks generally in short supply in this area recently

Overall you can tell that this operation is subpar. The owner showed up 10 minutes late. The place is dirty and disgusting inside. He couldn't check me in even though I'd already done the online check in. He couldn't print out my receipt. The vehicle had no gas in it.

I dropped off the trailer at about 12:40 AM so no one was there. However, the instructions were clear from the web site and the process was simple and straight forward.

The gentleman was good people

Great help here but worried about proof of drop off. Had no receipt,email when I left so I took a picture in case something went wrong

The best in southern Oregon

Ron, the employee, arrived late to the opening time. But he was pleasant and helpful. Van was super clean and ran fine.

Convenient location. No one at the store when I dropped off.

Nothing. .great and fast service

Give him more help. The poor guy was run ragged! But he had a great attitude and it was an especially stressful day (major fire started shortly after I picked up my rental).

The guy did not wear a mask at all the equipment was dirty dented with no x marks.

Gas tank was 1/4 full. Please make it a requirement that vehicles have full tanks. Van was not clean when I picked it up. Please ensure rentals are clean.

UHaul charged my credit card hundreds of dollars on more than one occasion without my knowledge OR Consent.

pick up app did not work, van was not clean, which is a bit unnerving during covid...

Every time I've been there they did not have the size truck that I reserved available. This is unacceptable.

Warn customers that it will take more than a half hour to pick up the vehicle.

Outstanding work on there part.

He did not have the correct number of blankets that I requested. He also did not have clean boxes that we could purchase. We had to visit another site that required a 30 mile trip to purchase the necessary packing materials. Maybe on the site it can list whether packing materials are available for purchase. Had we known this, we would have gone else where to eliminate the double location pickup.

The owners do not maintain a constant presence in the office. During normal hours their door is often locked.

Very bad service, the guy didn't set up a drop off location and just said google U-Haul when you get there. I spent so much time dealing with that after and also forgot to bring me my driving license back

Not very organized, small area so getting in and out is very difficult

Was closed when i returned the equipment

Easy to find location and easy to get too. Very friendly staff that helped us out.

The Uhaul office located at the Shell station off of the Ashland, Oregon exit 19 on Interstate 5 was filthy and disorganized.

It was ok, It was just too many trucks on site, I had to wait a while to park the truck.

Nothing. The manager is really easy to work with!

Get rid of the homeless on the property.

Pick up was efficient informative and friendly.

Find a way to refund extra gas, as I left over a half tank when I started with under a quarter. Also I wanted insurance only on the truck, but somehow ended up paying for it on the dolly too, this was never discussed, and I got charged for two days when I only had the truck for one day. Basically a local move just cost me over $300, which is total bullshit!! Dishonest and crooked shit!

The name of the pickup place was wrong. The WiFi was so weak and the connection was so bad that it took 50 minutes to get the tuck out. The truck itself was good but the online check-in process was so frustrating that I don't recommend to anyone and I won't do this location ever again.

Scary environment. Nobody there from UHaul--just a bunch of homeless people yelling at each other. Had to call and wait. No receipt given when keys were turned over. Wrong location from where we were initially told to go. Had to buy more gas, drive an extra 10+ miles (in second car for ride as well), and waste over half an hour.

They got me in and out quickly and everything went smoothly.

Regular hours... It SUCKS when we arrive at 2pm to return the vehicle and the site is closed. There was no way for us to get in touch with the person running the site as his voicemail was full. We will never rent from that site again.

Worst experience ever with Uhaul. Your online check-in failed and I stood there in 95 degree temperature waiting for 60 mins for the app to verify. WHAT A JOKE!!! Finally, someone on your "chat" feature gave me a phone number to call. 45 mins later I finally get the keys.

The rep went out of his way to be helpful and the drop off went quickly and with no problems. The directions were easy and exact.

The check in on the app was painful. It took 45 minutes to get it done.

Site is cramped and chaotic. Staff were friendly, but too busy to check the trailer I was dropping off. I took it on their word that all was good.

Everything was great, Ron was very helpful as always!

Ron is so great to deal with! I need a uhaul for another move in 2 weeks, will definitely go back! Fast and friendly service always, clean and courteous. Thank you!!!

Nothing. The attendant showed a lot of hustle. Great work.