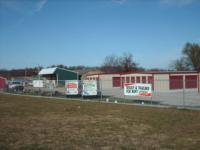 Karl is great to work with! We couldn't ask for better service! Thank you, Karl!

We had made a reservation, for Pryor, Ok. Graham Ave address. It is right across the street from the storage facility where are belongings were stored. We received a call the day before we were to pick up, that the Pryor location did not have our 26ft truck. We were told of new location. We had a 8:00 pick up time, there was no one there. The contact phone number was a fax line. We could not contact them. Thankfully, after nine AM, a delivery had arrived for this location and they had the contact number for the owner. The owner was aware, their phone number was in the system, was a fax number, and said they told U-haul of such. We had friends and family waiting on our trucks arrival. We left, some time near 10:00 AM, with our truck. We were told, inspection of truck, was not necessary, as we had the damage waiver. I drove to the nearest service station, and found the truck was a quart low on oil, so we added such. Note:People were nice, but the office was filthy, had a dog in a crate, and smelled. I realize, a lot of reservations are no shows, but this was a terrible start to our move. The truck performed as it should, thankful for that.

Took a while to find where to turn overdrive on, resulting in quite a bit of fuel use. Button on dash could use a label.

We were not told to make sure and refuel before returning the truck. Also, I would have liked to know I could check in the truck online instead of waiting in line. It caused me to turn in the truck a few minutes late.

didn't drop son in law did and he had no complaints other than their computers were down.

They were very helpful!

Actually have a truck in the same town as customer requested to pick it up. Don't wait until the day before pickup to tell customer they'll have to drive 30 miles out of the way to get equipment. I was told I'd get $50 off rental, but I haven't seen it yet.

No obvious signage was placed as to office location in this cluttered storage building / UHaul facility. There were 3 men working outside, moving metal pieces; none offered any help although I lingered several minutes trying to gain their attention. One man eventually got close enough to me that I asked him where to park the truck, but he didn't know anything about the UHaul business and didn't know where the office building was situated. The posted phone number was answered by a fax machine tone so I was unable to speak with anyone as to how or where to return the truck. When I finally identified the office, there was a man putting his shoes on behind the desk. No greeting or other welcome was offered me, leaving me feeling as though I was disturbing his day. Extremely poor setup and customer service!!!

The owner treated his secretary very harshly in front of me and another customer , causing her to cry! He then blamed her for not being attentive to her work. Very poor business operation

She was very nice and helpful. Did not do walk through. The lot to drop it off at was a big grass field with big potholes I didn't even want to drive my personal car back there I left it up front and walked

The lady who was working very nice, however really not good and trained well at rentals. sent me up a muddy grass hill to pick one of the two trucks. I came back, I didn't get to pick, it was determined after phone help pre-assigned (which was ok but why offer me a choice). Truck had a car hitch on it, had to go back get this removed, not part of my order. She was not well trained, did not know how to process on computer-had to call for help. took 45 min to get the truck. It all worked out, but she is selling blinds while renting trucks and was not smooth. She apologized mutliple times for all the delays.

Good experience overall found your people to be very helpful

A little trouble finding the drop off location that I requested. This may not have been their error. It appeared to be a problem in your database of drop off locations because I assisted by pointing to the exact location on your map. D & S was not found there.

Lights did not work - wiring connector was severely damaged from prior renter and obviously was not checked or inspected for damage by the pickup location. No assistance was provided in attaching or connecting trailer to vehicle.

I called 1st thing Monday to explain what had happened and that I dropped off u haul Saturday night. He said no problem he was checking it in right now, and not to worry about it. I didn't have any problem with the equipment. This location was very nice.

The back of the truck was not cleaned, but otherwise seemed fine. Pretty pleased with everything else. Worked just fine, and the owner was very great to work with.

The people who works in the office at Uhaul in Inola are very nice, imformative and help full. It is out of my way by 40 miles round trip to get the uhaul truck from Inola but it is worth it. I have used it now twice on two seperate occations w/n the last two months and Im always telling my clients about them. I sell Real Estate so there is a need for uhauls in my business.

horrible location. man did not return calls about rental, closed early, tried to rent our trailer out to someone else before we got there. was not helpful in attaching to our car, didn't even have a hitch we could buy-so he sent us to walmart. took nearly 3 and a half hours to get trailer hooked up and car loaded. guy from shop took off as soon as paperwork was done so we were on our own to figure it all out. horrible experience and questioning whether we will ever rent from uhaul again because of it. to help next customer? i don't think this location should be allowed to consider itself a uhaul location.

i had to get the trailer fixed 600 miles after starting my trip. at drop off i found there was a bad tire on the trailer also.

Everything was great, very friendly.