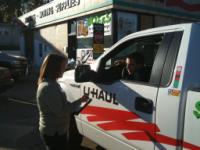 Pulled in and very efficient staff. Check out was easy and they Checked the back of the truck to make sure we had not lost anything like screws or materials for bedding

The truck was smelly and dirty. The check in process was not easy and although I had done all of these things online for my reservation they had to be done once again upon arrival at the facility. So I spent a total of over 30 minutes wasting my time.

Very easy pick up and return, friendly and quick

Man on the phone was not friendly or helpful. Spent over 20 minutes on hold waiting for help on the phone. Also, charged us for something we were not informed and didn't want to help with it either.

They will rip u fucking off they are fucking rude

The man who we dropped off to told us repeatedly that we were â€œmaking his life hard, he shouldn't have to be taking our truck back because he was supposed to be off in two minutesâ€ I asked for a receipt yet did not receive one. He was rude and condescending.

I made all the reservations on line. The wait in the office was not long. The employee handed me the paperwork and said â€œ your truck is around backâ€! â€œIâ€ had to find the unit amount many trucks. The rear door was half way open and someone had been sleeping on U-Haul pads in the back and there were drug needles in the back as well. I removed the pads and kicked the needles out. So my trip didn't start well. I had ordered a dozen pads so I had to carry them around back as I hunted for my unit. The air conditioner was almost non working. On line it says 20' trucks have cruise control, this one did not. For $1900 I think it could have! Worse U-Haul experience to date. Cab was not clean and with Covid I would have thought it should have been.

This place has always been very helpful and respectful!

Incredibly rude customer service as well as still holding $40 on my checking account even though it was returned 2 days ago. Can't reach anyone at the shop

The agent at the location I visited used his personal phone to photograph and file my drivers license for company records. His assurance of my information not being on "his phone" is total BS. Even if it loaded directly into the company website the information is still going to be in his phone. If I had not been in a hurry, I would not have rented from Uhaul. Designated scanners are cheap, provide them.

Was disappointed with not having a simple dolly available. Other than that, pretty good place.

The person at the service desk while renting the truck out was excellent. However, when we returned the truck, the person in the store was quite a disappointment. The store times clearly say that the location closes at 7:00 pm. We reached there at 6:50 and the person just plain refused to open the door for the return. When asked why the store is closed before 7:00, the reply was, "we are closed". I was asked to use the key drop. Now this is not an inconvenience in terms of extra charge or anything and I was perfectly fine with key drop but I was just upset on this behavior. Other than that, everything else was good.

The Equipment I requested 2 days reservation was not available at time of pickup because they said user prior decided to keep it another day. * Marker light had to be repaired on a substitute before use

inside of windshield was filthy as though someone had thrown a cup of coffee on the inside. The truck had a heavy cigarette smoke smell. People were helpful but the truck needs some attention.

Forgot to put my doily on the truck had to turn go back to get it , the act like it was no big deal

This site has no legitimate U-Box delivery service and communication is extremely poor regarding delivery.

Quick in and out!

The place is fine. The truck smelled like cigarettes and had cigarette buds in the back of it. The truck also had unmarked damage on one side, and similar damage on the other that looked exactly like someone parking it hit another mirror all the way down the truck. Which is fine as long as they wasn't thought to be us. The cigfarettes sucked but the truck ran and worked great!

I contacted U-Haul to get a trailer WITH BRAKES To tow a car to California. I asked if there would be a problem backing up with the surge brakes, and the man wearing a name-tag saying OWNER told me that the trailer only had a breakaway brake if the trailer got loose from the towing vehicle, and did not have traditional brakes. I did not have time to search for another trailer, as it was Labor Day weekend, so I took it. In Plainfield, Illinois I planned to drop off the trailer and get one WITH brakes to safely travel the mountains out west. The lady U-Haul agent in Plainfield explained that the trailer DID have brakes, and NOT just a breakaway brake. I continued on my way, and safely arrived in California. I wasted time going slower than needed, and wasted several hours trying to get a trailer with brakes. I ended up paying for 2 extra days, and also found out that there would be no refund if I dropped the trailer in Illinois, and there could be a charge up to $700 if I dropped it off in a location different from that on the contract.

most things went well. Moving dolly was not available

The employees are very knowledgeable and friendly. Thanks so much

Alot of miscommunication within the employees at this location. Threatening of stolen vehicles without contacting original agreement holder, lack of explanation of rental agreement, poor point of accountability, and rude attitude and unnecessary language from 2 employees. Even though the rental agreement will be paid, due to the lack of respect, uhaul will be the absolute last resource in the future.

Some trucks are nicer than others, but service has been very good. I rented a Uhaul 4 times in the past two months and every time has been a good experience

Tell your employee Kirt Warner to change his attitude and not treat customers like an inconvenience. Put a jack on your trailers so that people returning them after hours don't have to strain their guts out trying to lift them off the hitch. Maintain your equipment better. Our trailer has a bent wheel well, bent rails on the top and a noticeable gash in the tread of the drivers side front tire. But mainly it was the rudeness of the employee that ensured I won't be back.

The Huntington location was fine. My biggest issue was with the difficulty of using the online check-in. There were a bunch of extra things that I had to do and it ended up taking an extra 20 mins to get the truck. It would've been faster to just go to the store and reserve a truck by phone.

After driving 450 miles it was great to be able to return the truck and tow 2 days earlier then scheduled. This location parking was well lit for night time drop off and very clean and organized. I know this area of town is in a rough neighborhood but dropping off at this location you wouldn't have know it..... you can tell they strive to be the best looking on the block which they far exceed. Keep doing what your doing and stand out. It doesn't go unnoticed.

I've had a pretty unpleasant experience the past couple of times I've used this companyâ€”once when they double booked a uhaul I had reserved days in advance, and today when I got to my location and the truck battery died. I had to get a jump start from a stranger in the rain. Not to mention, the truck smelled like cigarette smoke and the driver-side ceiling mirror was broken.

Awesome ppl awesome staff friendly smiles despite the pandemic. They we're helpful in more ways than 1, the truck was a little shaky like it needed a front end alignment but it still drove well got us from old place to new place. So blessed we chose this location God bless the entire staff. #ThaBluuStoreonFacebook #CustomandPersonalized Appreal Accessories and more

Slow service; at least one employee should be at the counter at all times; also they were out of the $12 locks after I bought the last one.

Ordering the pods, delivery, and pick up was an excellent experience. Once they reached their destination and pick the pickup process began, in Huntington, WV, the nightmare began. Total confusion at the warehouse on behalf of the UHAUL employees.

Everything was great and service was fast and friendly.

Rented a trailer on Friday at 12 returned the trailer the same day at 6:40 or so and received a call from then on Sunday telling me I needed to return the trailer well I told them I returned it the same day they said well its not on the lot we have to check camreas to make sure and told me she would call me back to let me know what happened well never heard anything back from them

Staff was excellent...Very curtious and knowledgable. Took care of us very quickly and efficiently. The cleanliness of the truck is where things fell short. The cab had water bottles and food wrappers in it. It was clear that no surfaces had been cleaned or wiped down. My wife sanitized it before we headed for Clearwater.