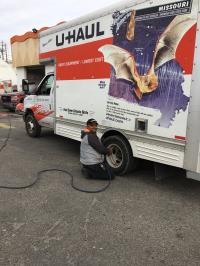 I drove 13 miles and was charger 36 dollars for fuel.... Uhaul website says there is a fee if brought back below 1/4 tank but I was above that so there should be no fee except the fuel cost... So how do they explain $36 for fuel when I only traveled 13 miles

Easy process to rent and return

Very impressed. Never used before and definitely would use u haul again.

seems a tiny bit disorganized, not as smooth as other rental companies

Michele (sp?) was very helpful and friendly! She improved the experience by modifying my reservation based on my needs of the truck rental. Impressed with her exceptional customer service and would return in the future based on the positive experience.

Always a great experience! The staff are friendly, the equipment is clean. We always come back for more exceptional customer service :)

The truck I rented showed that air bag had to be checked Ana an orange light on the lower right corner of the dashboard lighting stayed on.

I have rented a car hauler four times from this location and the service couldn't be better. Will be a long time customer for sure! The manager really looks after her customers well and is a customer service super star! Five stars all around!

Great team, took care of things for me!

Pickup truck was dirty and unwashed. Interior was not clean. Even a bag of garbage in the box.

This is the best location in Calgary. Everything is organized and prepared for the clients.

I didn't catch her name but the girl who checked us in was super friendly, funny, and engaging, all while being fast and professional. We were very impressed. Thanks!!

Everything worked well. People were friendly and accommodating

The truck was clean and ready to go for me. However the price ended up being over double what i was quoted and none of the staff could explain why...

The customer service was good and the truck was well maintained but there were still papers in the truck from the previous rental dated 10 days earlier so that made me think the truck had not been properly sanitized. I would rent again from this location but would like to see a clean can next time.

You only have 3 fifteen min, parking spots plus 1 handicap site. Your staff tell us to park on the St. where there are NO parking spaces or behind the building. That land belongs to the empty business next door. It says reserved 24 hours. Please reduce the number of U Haul vehicles on site, so that you can provide CUSTOMER Parking. It the City of Cal. was to visit your site I am sure that that you come nowhere near the required parking stalls for your business. UHaul is parking their vehicles where it should be public parking.consistently. There is a simple solution to the growth of your business, PURCHASE OR LEASE THE VACANT LAND LOCATED TO THE IMMEDIATE NORTH OF YOUR UHAUL LOCATION.

Nothing I would not change a single thing. Service with a smile, Speed with accuracies!!

Your employees were knowledgeable, courteous and made it an easy and pleasant experience. Thank you.

Allow for mobile pick up

I really liked the after hours drop off online experience. It was easy, helpful and quick. Thanks!

Please do not go through the manual check in again if the client has already checked in on-line. I opted for the roadside assistance charge in on-line booking, and it was taken off during manual check in. I actually needed some help since the rental truck got stuck in snow but unfortunately it was not covered.

The check in process was incredibly painful. I opted to check in with mobile to avoid having to go into the store. After spending 15 minutes uploading photos and declining what seemed like several additional services and products, I went to find my truck that was listed on the mobile app and it was nowhere to be found. I had to go I to the store and then repeat all of the same steps with the service rep inside the store. Finally they gave me an entirely different truck, which had been sitting in front of the store or at least half an hour, idling and Bruno g fuel. Not to mention the negative impact in the environment. When I returned with the truck the woman who helped me could not have been less interested in my concern, which was that the truck had been running for over 30 minutes before I took it, and why should I pay to top up the fuel that had been burned while idling. The first time I expressed me concern she completely ignored me and proceeded to have an up close and personal face to face chatbworh another employee whose mask was around his chin. The second time I expressed my concern and wanted to see the mileage photo I had taken, in case there was a shot of the fuel gauge, which I had forgotten to check before leaving, she told me she didn't care about my photo. When I expressed my concern a third time after she still wasn't making herself clear, she asked me if I as done. I wanted to say if you are ready to be helpful then I am done, but I refrained. This was the biggest waste of my time and an unnecessarily painful experience. Figure your processes out and clear up that yard a bit. You park your trucks at an angle in front of the store and then you want people to back out in the opposite direction of the angle you've parked the truck in, while another U Haul box truck sits less than 12 feet behind me. Get your sh*t together. I will never rent another U Haul for as long as live.

comment to improve, when returning vehicle after hrs for the GPS purposes it should have been explained to a cx when filling out this portion we should stay in the vehicles for the gps purposes I called the head office the lady by name of Sara which was very helpful advsd me if I was not informed by the office that I have to stay in the vehicle she would advs the situation to the office therefore due to lack of information on your side or no instructions on how to fill that portion on the contract I should be reimbursed my 20 dollars, (I droped the key in before completing the form) otherwise great service I will use you again advs family and friends about your great service

Great experience renting a van today from a customer service rep who really gets it (and has a pretty good sense of humour to boot), Michelle Primo. Couple years back had a hitch put on at this location and they went above and beyond (installed the hitch way cleaner then the guide indicated) that time too. 5 stars!

Have your gas tanks full before a rental goes out so there's no dispute where the level is. This upset us.

There are two negative points: - There are no place to park cars (for customers) for longer as 15 min, if you rent for 4-5 hours, for sample - Before return a van I filled up gasoline up to 7/8 of the tank. (Requirement - at least 3/4). But, get charged $10 for the gas anyway. That is fraud, in my opinion.

Train your new people better. Up to now haven't had any problems but new girl screwed up on reservation and return. Had to go to location 2 times.

The people working in the lot were so efficient and helpful; it really made a difficult day a whole lot easier.

Could not have been happier with our treatment on pickup. Competent quick and friendly. Solved several problems for us that were not uhauls fault. Excellent work!

Great experience as per usual! Thank you!!

I tried to do the online reservation but the truck I was assigned was not accessible so I had to go inside. The staff was super helpful though and had a great experience.

Location was excellent, central booking number that arranged the car hauler trailer messed up... Yet again. Maybe the 6th rental they'll get it correct

Was good. Good service. Just need to streamline the process. The online system continues to be cumbersome and disjointed. Should be sim

Make bills accessible to people . Have no idea what app is required to see what i paid for to open your email file.

Staff was friendly and location was organized. This is a big improvement from my experience at this location previously.

I was impressed with the quality of services receive from this location, considering the overall condition of COVID-19. All staff with whom I interact was performing above expectations. Thank you.

I received good service with very little wait time and the pick up and delivery was handled efficiently. The trailer I rented was not clean and one of the vertical pins at the back was not properly secured to the trailer. After dropping off the trailer, I again received both and e-mail and a phone call telling me to call which I did. I was informed that I had not returned the trailer however, I did return it about four hours after picking it up. Your systems need to be reviewed to determine why this is happening.

Truck we rented at a different location yesterday came equipped with a lock for the box this location did not. A snow squall rolled in and the tires were questionable for winter weather- managed to return the truck safely.

Outstanding service from the staff!

Customer service was excellent!! Everyone was so sweet. I screwed up and went to the wrong location and they were so nice about it.

The staff were very helpful and professional.

Nothing, our experience was great.