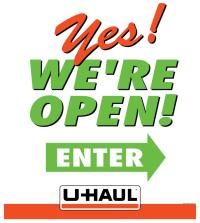 Great customer service an A+

Fenders on driver's side of the auto transport were broken, welds coming apart, wouldn't seat properly. Straps were badly frayed and barely long enough, we had two blowouts on the same tire, same axle, passenger side tires hot throughout trip, while driver's side remained cool. We were stranded on the interstate (twice), and customers service the first time was great. The second time was poorly communicated and seemed to be less than concerned for our safety and overly concerned about the subpar equipment they'd allowed on the highway. We were advised not to move by Uhaul, the Sheriff's dpmt. had us move because we were in such an unsafe place. We have had good luck previously and were regular customers. After this experience, never again.

Very nice and helpful people there.

Everything was good. Staff helpful

I was charged for a full day's rent after i returned it. It was only a few hours late. I was also charged the insurance. Wasn't real happy about charging me without even a phone call.

Everything was great. They had everything we needed. I will rent from them again.

Rates are too high

- building not labeled well -window handle broken. I could put down the window however not wind it up. :( -great service!!!!

They were very helpful an super nice . Thank you

Professional and friendly. Happy to answer my questions. I will certainly return.

I was told where to drop off the U-Haul. I drove 30 miles to get there. They told me I was to drop it off where I was. So I drive 30 miles back to drop it off. I waisted 1 1/2 hours of my life. At least where I did drop it off they were very kind and understanding.

I have rented from this location several times. Always good equipment and great customer service.

Come down on price of rental.

We brought it back early, and he was VERY helpful, quick and convenient. Location is easy to pull in and out of.

They are very helpful and courteous. Great place to rent from.

Nothing, this is franchise location and they were very helpful all while running their other business as well.

More equipment options at that location.

Not sure why I got charged for extra miles when you dont do the est. Very well.

The guy was nice and understanding, but because of our pick up dilemma, nothing was documented about drop off time so we were charged an additional $63!! We've used U-Haul for 30 years. Never had an issue before. Won't be using them again. I think we deserve a refund if the additional charges!!

Maybe the problem was not with the personnel at the Marshfield location, but with your computer system. Whatever it was, I dropped off the trailer at 3:30 PM and was told everything was all set and I would get an E-mail saying the account was closed. Three hours later when I had not received the E-mail I called U-haul and the account had not been closed. I had to drive a half hour out of our way to go back and get the situation straightened out. The U-haul agent claimed he closed the account and the the return time was indeed listed correctly. But something had happened that he had to go back on his computer, and then the account finally closed. So the situation was somehow messed up when I dropped the trailer off. As a result we had to drive half hour out of the way on the trip back to KC that night in order to correct something that should have been done that afternoon.

The drop off was convenient and easy, he was very professional.

one of the rear tires on the drivers side (inside tire) was flat and was not discovered until we turned the truck in. Did not cause any issues.

I reserved a 10 ft truck but was told at the counter that I had reserved a 15 ft truck. I was charged for a 15 ft. I later looked at my email and i DID reserve a 10 ft! Cigarette butts in the ashtray and food crumbs all over the floor.

Have the equipment where you said it was to be not 30 miles away. I will think twice before I rent from U-Haul again.

PLEASE NOTE: This message contains several curse words. I hated to provide same in a note but I am quoting an employee of your agent and you need to know how he spoke to me. I was cursed by this employee (Scott) over and over again with increasing aggression and hostility. I had arranged for a truck with an AC and a cruise control and Scott was the person who took my order. Scott was not there when I picked up the truck and even though I asked the agent to confirm it had both cruise control and AC, and even though the Agent gave me that confirmation after a visual inspection, the truck did not have cruise control. It was not until we had the truck loaded that I found it did not have cruise control. I made a verbal complaint and an attendant on duty (Scott) told me a I was dumb fucker, that he did not give a fuck about my problems, the I was a fucking civilian and that had I received a military education as he had in the Army I would not be such a dumb fucker. AGAIN, I APOLOGIZE for using the word "fuck" or "fucker" so many times but I am quoting the language used by Scott toward me. This same attendant accused me of cussing and I asked him what cuss words I had used and he told me that I had not used any cuss words but that he was tired of people like me and that he planned to curse a lot,..., which he did. Ultimately he gave me a customer service 800 number to call and told me to call that "fucking" number because my "fucking" problem was not his "fucking" problem. AS TO THE 800 CUSTOMER SERVICE NUMBER -- IT IS USELESS. I have called the number many, many, many times and cannot get through to talk to a customer service representative. AS TO THE AGENT,..., another employee called him while I was there and talked to him by phone and we made some arrangements on some other issues but he REFUSED to have the phone passed to me so that I could talk to him. I left my name and phone number with the other attendant and asked that she give it to the Agent and she said she would by I never heard from him.

Everything went smooth, service was excellent. Got a truck for a short in town move.

Get your computers fixed so they will take credit cards

Nothing! Working with Scott was awesome!

They were ready to help. It took no time at all to detach and go.

Everything was fine thank you

Encourage personnel to maintain vehicles, the 20' truck was without wiper blades, and the brakes squeaked on the 26'. Honor the price that was quoted at the time of reservation. It has happened several times before in rental experiences with Uhaul where a price quote is given when the reservation is made a few weeks prior to the move. I specifically ask for the TOTAL COST since this estimate will be p[assed on to the customer. But on the day of the move when the truck is picked up the actual cost is higher, in this case over $700 when the quote was $622.

Nothing. This was handled very quickly and efficiently. The gentleman who was working the morning we picked up the trailer even went out in the terrible cold and helped us hook up. Great!