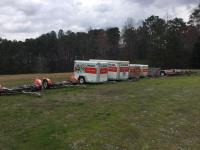 I was originally scheduled to drop truck off at 1295 Canton Highway, Cumming, GA 30040 and attempted to do so. Walk into Texaco and did not see anyone working. I called out â€œHelloâ€ several times with no response. Finally as I started to leave a man appeared behind lottery ticket display. I introduced myself and put paperwork and keys on counter. He kept asking me if I was picking up or dropping off. Finally I picked up keys and said â€œreturnâ€. He then mumbled to me in another language. He reluctantly came out from behind the counter and walked towards the door mumbling at me again about 9am; it was 8:20am at the time. I followed him out the door with the keys in my hand. I walked down to the street while he stood on walkway above me yelling â€œWhere's Truck?â€ and replied â€œstraight aheadâ€; we went back and forth with this as started to become frustrated. I had a 9am meeting to lead and I spent 10 minutes at this location and was not making any progress in dropping off truck. He wouldn't even approach the truck. I wore a mask and he did not. He start yelling, â€œno parkingâ€ â€œno parkingâ€. I'm really confused because I have seen people park in the spot where the truck was on many occasions; there were no signs stating no parking. I did understand his concern that the truck was blocking a dump truck access to dumpster. I asked him when the dumpster gets emptied. Once again he just mumbled at me in another language. I offered to park the truck by the trailers near the street but he started cussing and yelling at me in a language I understood, â€œI said no parking $$)(, you ;)&(, I said no parkingâ€. I tried to explain I was told to drop truck off here according to paperwork left on countertop in store as well as on my online account. I was very frustrated at this point. I tossed the keys to him that he let drop to the ground. I began to walk away. This man began cussing and yelling at me again, â€œYou, ;)&& Come here :)&&))?, come back hereâ€ over and over until I turned around. He then threatened to charge me for a week if I left the truck here; I took his threat seriously and started to walk back towards him. As I was walking towards him I mumbled at him; I could not believe this was happening. As I was looking down he threw the keys at my head. I was able to block keys from hitting me in face but still caught them with other hand. I was climbing back into the truck as I cussed cussed at him. My daughter whom was there to drive home witnessed all of this yelled, â€œDad!!!â€. I calmed myself as much as I could and drove several miles to another location, Star Storage. I was unable to do online checkin until the appropriate personnel approved the new location. It's well after 9am now and I'm waiting for the approval which I received with no problems. As I rode home with daughter, I called customer support and filed a complaint about the U-Haul representative's attitude, unprofessionalism, laziness and lack of concern for customer who thought he was following protocols. Thankfully I had this horrible experience and not my wife. This is a terrible location to drop off I-Hauls. They just don't care.

Always talk to the same person,knows what I need and does a great job helping me rent a trailer.

We had to call U-Haul Roadside Assistance twice. First, for a blown-out inner tire and second, for busted lights on the trailer ( as in no lights at all). For both calls the response was immediate. and the technicians that came were really experts in their field. All we can say is U-Haul is really DEPENDABLE! THANK YOU, again for taking care of our trip! May you have continued success, more power!

Tracy was great she helped me with everything.

Great experience all around.

Such an easy process and Star Storage was very helpful as it was my first time renting. The cargo van was easy to drive and fit 2 queen bed sets and a large dining room server/console. I would recommend to anyone who doesn't want to drive the larger trucks.

I dropped off after 6pm and used the key drop. I didn't have contact with anyone. The facility was clean and inviting.

I was not told ahead of time that this location only does contact free pick up - arrived and no one was there. Finally called national number to find out how to get the truck after waiting around for 30 minutes. The AC in the truck did not consistently work. 4 hour drive in 90 degree temp with little to no AC. Side-view mirror was loose and wouldn't stay upright. Truck definitely needs some maintenance.

The truck and location I originally booked was not available. Tracey called me several times and went over and beyond to ensure I had what I needed, Great communicator

When I turned in the Truck, the Lady working was extremely RUDE. She said i couldn't come in due to i wasn't wearing a mask- but neither was she. When i asked did she want to review checkin the rental she said no - just give me the keys - i'll contact you if there are any issues Very unprofessional!!!! .

We have used this location several times. This time was unusually unfriendly. Yes, there is a pandemic and we should take precautions however, this experience was something I would never want others to experience. There is no reason to be so unwelcoming and unfriendly. Sorry that we bothered you with our business. How dare you make my 4 yr old wait outside.

All communication was done on-line due to the corona virus and the messages and correspondence were very confusing. We did finally talk with a representative on the phone and they were helpful. We did not request any packing blankets and we were told that there were none in the truck, when, in fact there were several. We, of course, turned them in when we returned the truck.

It was so easy to return the truck! I was quite pleased. Will definitely rent from U-Haul again.

The APP is comber some could be improved

The office staff was very professional and customer oriented. Will rent again in future

Absolutely wonderful staff. This will be my goto place for future storage and truck rentals.

I hadn't rented in a while so a review of the picture requirements if returning after hours before the contact is signed would be helpful. I personally wasn't ready for the photo request at end of return. The website wants you to take pictures the moment you returnâ€”- simple stuff but not if your not expecting it. Any mention of it before rental is helpful. Also though the truck was well maintained the battery was weak and died on uswhen we were getting gas at the shell on Bethelview road and Canton hi way. Other than that the truck was perfect for our situation. Thx. J.

Very thorough and friendly. Thank you.

Excellent service i would recommend this location thumbs up.

Nothing, the staff were very helpful.

friendly and thorough. Thank you.

Improve computer system check-in. It took 30 minutes to check-in due to computer gliches.

I had a great experience with this particular u-haul location. My only disappointment was when I realized I had driven a lot more miles than I thought. I will rent from this location again in the future.

The associate was very nice and helpful.

Everything was fine and the staff was very friendly and professional.

My experience was horrible. First, the 15' mover wasn't available at the location where I reserved it (even after also receiving a confirmation email). I was instructed to go to another location. Upon arrival at the other location, I was old that the car dolly would not arrive for another 1.5 hours. What's the point of making a reservation???

Blankets were not included as ordered - picking up when they are closed made a big problem. Ordered one place printed receipt - when i arrived for the 24/7 location it told me i was at wrong place 8 miles further to go

Friendly and efficient, thank you.

Very convenient to my home.

I rent from Star Storage on a regular basis. They are excellent.

Somer was very helpful in working with my schedule, excellent customer service. This location has helped me in the past and will again in the future I am sure.

Everything went well and efficiently. Thank you.

Brake lights and turn signals did not work. Only marker lights worked.

Nice and friendly staff. I liked the way overall experience there.

Rear overhead door was jammed on the tracks. Needed pry bar to pull down and free up door. Perhaps the stop is missing?

Our experience was remarkable: Star Storage made our move extremely easy. Their flexibility in our picking up the truck allowed us to complete our move before the rain began. Thank you so much!

A place in the pavement to park my car while using the U-Haul. One of the best locations in town. Very pleased with the service.

We have called and complained about our rental experience and we're told by the manager that called back one time that he would call back after her reviewed the phone calls. Since then nothing !!!

Very easy and quick to reserve the vehicle. Pleasant interface with rep on all three occasions (reserving the truck a week before, pickup and return of truck). Thanks for making it easy.

We loved both people that helped us rent the uhaul truck. Their friendly, courteous personalities made doing business a pleasure!