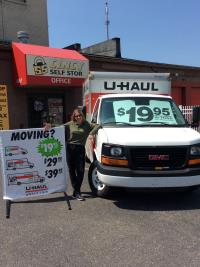 Great truck, well-maintained, but like anything with U-Haul, be aware there are many hidden fees. Overall decent experience, just a little more expensive than I anticipated!

Very nice staff I would go there all the time

The manager at this location was excellent. Very clean inside the business and the truck was sanitized and the truck ran perfectly.

Great service no improvements need to made

right rear wheel was worn unevenly indicating not in alignment. I think this was evident in my drive and reduced gas mileage below my expectation.

Our move went smoothly thanks to U-haul's friendly staff. The truck was clean and ready to go when we arrived. I highly recommend Uhaul!

Rude, not helpful at all and closed the door in my face for no reason.

Employees were not wearing masks inside

Both the manager that checked me in and the guy in the yard that helped me load the trailer we're absolutely the best. Thanks so much.

VERY GOOD SERVICE AND NICE DEALING ,THE LADY AT THE BUSINESS CENTER

VERY GOOD SERVICE AND INFORMATION ABOUT CONTRACT WAS GREAT, THANK YOU

The whole process was a nightmare! I tried logging in on the app because it was a Sunday and the office was closed. I got no email or text for confirmation although they took my info and credit card number. I wasn't sent a reservation number to be able to pull my info up on the app. I had to call U-Haul and wait forever on hold three different times to help me through the process. I was given a code to get the key and the key they gave me access to was for the wrong truck! Everything that could go wrong went wrong on top of the app was not easily navigated. Will not use them again!

Warn people that you don't have dollies and don't make me ask for a refund for something you don't have. It should've just been removed. Also why were none of the employees on duty wearing masks?

Staff was friendly and helpful. Made the rental process hassle free. Would definitely recommend using this location!!!

Neither employee was wearing a mask even indoors as they served customers. That was my main concern.

Monica waited on us when we got there , she was absolutely rude and short! When we got back , she was better but overall she needs to work on her customer service manners!!!!!!

I had a little trouble doing the automatic check-in and it took longer when I got to the dealership. Even so the manager was very professional and polite.

Location was easy to find and clean - love the mobile check in process!! Made a long day shorter due to the quick process.

The worst customer service. If you want see racism go to this location. When she manage other customers she go to door with them and explain to them every details and give them what they need as a equipments like dolly but for me she just gave me the key and said find the truck by yourself and did not explained anything. After drop off she charge me for missing dolly but she didn't give me any dolly at all. Just don't go there or if you go be carful about the customer representative in the location. She want charge you for service which they didn't give you. The customer service representative at this store was rude. I have never seen such bad customer service express anywhere in this world. I am sorry and feel bad for U-haul for this type of service.

The customer service was outstanding. The faciity was spotless. And the owner was invested in the business of listeing to the customer. I recommend this location highly.

Easy and smooth transition.i totally understand due to COVID-19 call waiting time is longer then usual .totally satisfied with my rental experience.

The location was fine, but the employees at the location were screwed by uhauls ineffective system. uhaul's express checkout didn't work. Uhaul's credit card system was down. Because uhaul didn't have my credit info saved, even though, I submitted my credit card info to uhaul prior using uhaul's websiteâ€”I had to pay cash. I didn't have $140 in cash in my pocket, so I had to call someone to bail me out. The whole process took hours and added a lot of difficult to a day that was already stressful because I was moving.

Close the Hamilton and Ashtree location. Terrible, Terrible people skills and service. Thankfully Monica at Spring Grove took great care of my needs, she was courteous and quick, and restored my faith in UHaul. Thank you Monica!!!

Monica was very professional and friendly

The trucks transmission was shot, I couldnt go over 25 to 30 miles. It was loud and embarissing on top of all that I have been charged 3 times for 1 day.

Monica had/has EXCELLENT CUSTOMER SERVICE!!!! not only did she take time to show me how to work the equipment. She actually treated me like she was conscerned about my safety.She took that extra mile that people want when they go into a place of business...High 5 and big thumbs up to Monica(spring grove)..

Not a thing keep up the good work.

I rented an item and then found that I needed a different rental. I took the original rental off the lot but had to return it and rent a different item. I was not offered any refund. I realized this was in the contract but I thought there should be some sort of reimbursement or discount on the replacement rental.

The rep was very nice and professional!

The lady was extremely nice....

Although the property is going through a renovation the staff is helpful and the trucks are well kept.

Over charged, no customer service, management seemed racist towards me. I honestly drove 15-20 miles and was charged for 61 miles. I drove to a nearby location, picked up 200 chairs, delivered 200 chairs, and over filled the gas tank to full only to get treated like trash by a non understanding women who clearly agreed that there was No possible way I could complete that trip in less than 2 hrs along with driving 61miles......nevertheless she dismissed me and told me to call 1800uhaul which I did and now there is a dispute.

Service was amazing. The staff was extremely helpful and knowledgeable. Check in and check out process was very smooth. I would recommend using this location.

After I left the lot, I noticed a crack in the windshield and also noticed a wing nut missing from the dolly that was supposed to be locked that came loose. I called to report this to Manager Shawn McKinley at 513-681-9700. He said â€œdon't worry about itâ€. Upon return, McKinley was dishonest and said I didn't mention the crack in the windshield and only mentioned a â€œscratchâ€ and the loose dolly that he was already aware of, yet, not proactive to resolve before renting to me. Regardless that I purchased Safemove insurance that the uhaul site clearly states covers window cracks, McKinley continued to be untruthful, defensive, disrespectful and was clearly trying to cover for his lack of follow through after I called. I spent 8 hours in 90 degree heat helping an elderly woman move her entire apartment by myself; then to come back to the frustration of a lying manager and another that doesn't understand what Safemove covers, I am acutely disappointed. I still haven't been contacted and was not given the balance of my deposit back. Before I left the lot that morning, I I looked over the truck with the female manager on duty and she placed stickers on the truck where scratches on the truck existed (although she ran out of stickers and wasn't able to mark them all)- I DIDNT CALL to report a â€œscratchâ€ . I called to report a CRACK IN THE WINDSHIELD. I shouldn't have to sit around a uhaul office for 45 minutes while a manger that doesn't understand Uhaul policies made multiple phone calls without any resolution. This location is convenient and has potential but clearly would benefit from ethical, credible, informed and honest management. I recommend using a different uhaul location.

They were both just great !! Always going to come to this location !