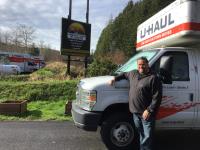 Truck smelled like marijuana when I picked it up and had to return for a different truck. The guy there complained about uhaul and acted as if I was an incon for him

None of the employees in this enclosed space was wearing a mask. In Oregon masks are required. They certainly should be for employees indoors. I'm older with pre-existing conditions. It really bothers me when a company's employees so freely risk my life and the lives of all of their customers.

truck windows were not clean, truck was nice otherwise

I made a reservation several weeks ahead, and called both the uhaul regional office, and the pickup location the day before my reservation, only to find out that they couldn't see my reservation. All information that I had given initially had to be redone to pick up the truck and trailer, waiting more time than necessary.

When we arrived they didn't seem to know what they were doing they sent me to the another location that sent me right back to the first one. It took 2 hours for them to get it figured out. Then I had to hook the trailer up myself. That has never happened. They didn't seem to care.

I missed the entrance because there was no sign and I was there for over an hour because the computer/site kept kicking the information out just before the contract was completed. I was overcharged.

Printer and software are S-L-O-W and unreliable. Clerk had to reboot and restart contract from the start. Check in clerk was excellent-- efficient, courteous, prompt.

Thank you Dragana for the excellent service. You made renting a truck easy, easy. I'm sure you have a great future at U-Haul.

Danyelle was extremely helpful and the process was painless.

Very quick and seamless. All employees were professional.

I rented a trailer to go behind a truck (not a truck) - the rental clerk told me the rate was $0.78 mile over so many miles - I was planning on taking the cargo trailer from Reedport (packing stuff from my RV spot taking it up to Salem and then the next day take it from Salem to Newport and back again which would have cost me more than the trailer. It was a lengthy ordeal with calls to the service company after I left the trailer there and found out I was given wrong information. so I went back to the store to get the cargo trailer. the clerk was apologetic and the man said there was a glitch in the computer software to give me wrong information. So before this day I went to pick up the boxes I had ordered when I rented the cargo trailer and I asked the clerk if this was taken off my bill cause I was picking them up early - so when I got to my new apartment in Salem there was a delivery of the boxes I had ordered!

I used online drop off and it worked easily

There is cleanup and again there is clean it's in the eyes of the same people who see only greed and UHAUL is full of that! Go look for yourself the windshield never cleaned front and back this is just really stupid question!! Overcharged all done by the home company. One day $214 and change that's for a 15'footet less than 24hrs and 79 miles and a $10 dolly. I think I got Fâ€”- and didn't get kissed

The lady at the desk was very pleasant and helpful, the man checking in the uhaul was fast and accurate, very friendly...

I was charged a late fee when I had already asked for an extra day when I ordered the equipment. I was told I had until 5 pm on the extra day to return the equipment then was called at 9:30 am saying it was late. Not happy at all.

I was charged for days I did not use,although I said maybe 4 days, brought it back 3 days, one day early, and was told " no worries, you wont be charged until you get back" well I had everything counted on that, So when the charge was MORE than I used, it caused me to stress not having enough in my bank leaving me in the negative, again knowing I would only use it for three days, but told them four days just to be on the safe side,being I was told no worries not charged until you check out, or return the trailer, Not true, other than that, I always go U-Haul, but wilm know your charging rules better next time. Thank you .

Very good customer service, ready when scheduled to be picked up! Wouldn't hesitate to recommend this uhaul location at all????

They were very friendly and helpful at both locations.

They were really helpful and pleasant.

Lube the pivot and clean the rust on ratchets.

Very friendly staff and easy to work with. I will work with them again as needed.

Need to make sure customer understands the preferred rental location may not be available. Requested rental pickup in Coos Bay, Oregon. Even though I confirmed the reservation a few days before the scheduled pickup with someone at the Coos Bay store, didn't find out until the night before pickup that it would be Reedsport, 30 miles farther away.

I was turned away when I asked the first time. I called through to customer service ( who was a joke) and managed to get the tow dolly I was told was unavailable. I was very upset and mad. it took over An hour and a half to sort it out - not happy at all.

My gas at pick up was below 1/4 tank, reported at 3/8 level? However returned with 3/8 th of a tank. Perhaps some help estimating gas needs. May be available did not look. May have been told gas needs, did not remember. Great job over all, thank you u-haul!

Check tire pressure when vehicle was loaded rim was on the ground.

I was not a happy camper with the overall service of getting the run around about prices. The truck smells like cat pee. and tried to charge me 25 dollars for 2 little pieces of paper.

I showed up at the end of the day missing an important part of my trailer hitch. They came up with a fix and got me on my way with a great attitude.

They were awesome !!! And we ran into freind renting uhaul from there !!! They are helpful and great!!

The woman was rude. The cab of uhaul was full FULL of long white dog hair & pop or something sticky.

They had the only 26 ft truck after our reservation in coos Bay couldn't be found. Not happy to drive to get it but st least they had it

Dropped off truck after hours for the store, so no contact with them. Easy drop off system if you read it, I didn't so I screwed it up.

We will be calling regarding the rental. They did not have the pigtail to operate the lights on the trailer. We had to buy the parts and the friend who used to work for uhaul installed it for us.

Truck was a pleasure to drive.

Bad tire, had to fill up twice. Hook up chains not crossed had to tie up with rope to keep from dragging. Original drop off place was doing construction, had to call to get them to gate. Then, they wouldn't accept. Said the Uhaul man was off, told me to go to Silverado location.

Service was pretty slow, country-style "we'll get to you when we can" relaxed and pokey pace of customer attention. Friendly though. They could be more efficient and user-responsive in future.

Seemed to be a more complicated process than it needed to be...regarding paperwork...

The Oregon Coast RV Park has the best Uhaul rental service that I've ever used, and I've used a lot!

The gentleman who took care of me was excellent! Very helpful and knowledgeable..would highly recommend