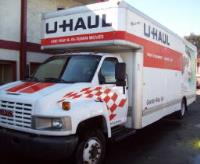 The two men in the office were rude and verbally combative and told me that if I didn't have the truck back for the next rental I would not be allowed to rent again from Uhaul. Also they refused to put on their masks despite being inside a very small office. I will not be comfortable renting from these reps again.

I was to receive an email from you folks as to what my bill was. I have not received it as of yet. I assumed I would get it the next day. I rented the truck on the 25th of Oct. You want to improve customer service? Get the actual bill to me sooner.

I have dropped off U-Haul rentals at Crockers Lockers in the past. Excellent service and I highly recommend them.

Been coming here for years.The trucks are always clean and the office people are great oeople.

Thank you chad very please with him and very friendly thank you!

Crockers Lockers is the best.

The attendant was extremely racist. Myself (a black man) and multiple Latino men where disrespected and spoken to poorly by the attendant... I'm disappointed and will never use Uhaul again.

Manager was very rude. He walked up to our car around our 8pm after hours drop off, and he started yelling at us asking for the keys right away before I could even check out on the website. Also flashing his flashlight in the car window while I was trying to get on the website to see the after hours check out process. He was not wearing a uniform, and he didn't have anything that shows he was a manager. I insisted on putting the key through the door drop off because I didn't know who he was, and he was very mad that I didn't just hand the key to him. Over all, a very poor experience, and I wouldn't rent from this location again.

The representative at the location was extremely difficult rude lied several times, didn't want to rent to us, cAncelled our first reservation for no reason, yelled at my sister a women and she wasn't rude at all in which was unbelievable and cause a very hostile interaction with me and the desk worker. I turkey believe the guy working there was a racist and didn't want to rent to us solely because of our race period. He was not interested in helping us and had a very nasty attitude and created a very difficult experience and obstacles hoping that I would just walk out angry but I wasn't going to and I didn't. He sent me 7 seven text messages saying that I needed to send photos of my drivers license I completed the process and showed the worker that on my photo and the pic uploading through the link was successfully completed and he kept saying I'm not getting them on my end so I. Any rent the vehicle but when I threatened to call corporate while in the store and did call and have the phone ringing, mysteriously the photos came through and he continued to be nasty and very rude with processing our rental that he has to rebuild because he cancelled the other order we had... the entire experience was unnecessarily difficult and hostile escalated and unlike anything I ever experienced renting a vehicle from any place before. The worker was angry for whatever reason and totally took it out on us for no reason. I immediately call customer to report the incident right after I picked up our rental.. I believe because this was an authorized dealer location they must feel that their is no accountability or consequences for their actions because they do not represent uhaul professionally and should not be allowed to represent the brand. I like to file a formal complaint sent this to corporate for a review and resolution.

Make the time to conduct a walk around of the vehicle for damage prior to leaving the property.

The gentleman that helped me was great and made the experience very easy. Moving is a stressful event and he helped make it a little easier. Thanks!

I thought it was a lil expensive 1.09 a mile never got my 45$ back yet on my account plus I put like 6 gallons of gas extra never got compensated for that

Had some issues. I had a reservation for two days. Stated that would probably only need the truck for one day, but was not sure hence the two day reservation. They call me the evening of the first day and informed me that I had to have the truck back buy 8:00 am the next day. I reminded them that I had a two day reservation. They told me that they would see what they could â€œwork outâ€ and call me back. I found the customer service poor.

Everything was perfect and Jeff made the whole transaction from finding the vehicle and making sure I got what I needed very smooth.. Thank you Jeff!!!!

The guys in the office were awesome and understanding. Had a lot on my plate and they made things a lot easier for me.

The guys at this location was awesome! They were very helping for my pick up and return. I ran late with my return and the stayed professional and understanding to my situation. Thanks Team!

I got to see kittens while picking it up. I don't think you can improve beyond that.

Very rude and unpleasant employees. When I arrived, an attendant was outside and pointed where to park. Did not verbally acknowledge me or provide instruction to me as I waited outside of my car and he continued his duties. When he walked toward the office door, following him, he closed the door in my face with a hard swing. I didn't know If I was supposed to wait outside because of COVID and because he knew I was right behind him, I assumed the door had slam lock. so after waiting outside for a few minutes, I went back to the car to await further instruction. After he came out and resumed his task of moving trucks around, seeing me and not acknowledging me, I went to the office door, and yes it was unlocked. When I approached the attendee that's was inside, and calmly told him about my dissatisfaction at how I had been treated he was disinterested, did not apologize or even provide an excuse, but kept giving me instructions, the keys and the pamphlet. When the attendee from outside returned to the office and got on his computer, I gently voiced my dissatisfaction and lack of customer service, he told me several times if I didn't know what to do I should have just asked. I nodded and walked off. I did tell them that if I had Time to utilize a different location, I definitely would have. Not one single apology. These employees definitely need some direction and I definitely deserve an apology.

Thank You! You guys go above and beyond and it's greatly appreciated

Nothing it was ok

No Improvement needed. I also have a storage at this location. The staff here is friendly and pleasant , always a pleasure doing business with them.

Fast check out at pickup. Celan Uhaul. Very courtious at counter. Thank you

The reservation, service and drop-off was smooth and very easy.

I Own a moving company and had to rent a U-Haul because I broke the driver side mirror. I found this location which was a mile away was in and out in no time

Best rental place I've ever been !!! I was so pleased from my first phone til I returned the van!!

The AC did not work and it was a very warm day today.

Can't think of anything to make it better.

Quick in and out. Just make sure you do all the pre lim info online to make the process efficient.

Parking is unclear if you have to leave your car. Otherwise it was a convenient location.

What can you do to perfection?

Everything was great. The people were nice and helpful. Thanks

The two men at the front desk were absolutely terrible to work with. Rude, abrasive, and unhelpful. No one greeted my wife and I when we came in or even made eye contact with us until our male friend walked in. The older man (who never introduced himself to us) was completely unprofessional and became agitated when we asked to see the inside of the truck before we drove off to make sure all the equipment we rented was inside. Good thing we insisted because we needed to know how to safely latch the door and he wouldn't have showed us this otherwise. The man at the desk became annoyed when I insisted on visually inspecting the vehicle myself before I confirmed it's condition. I would never go back here and wouldn't recommend that any other women do either - clearly the men working here don't respect female customers and have no interest in providing customer service. They also misstated the amount of gas in the tank when we picked up the vehicle, causing confusion when we dropped off the vehicle and were told we hadn't filled the tank enough (we had.)

I rented a truck two days in a row. Both trucks, a pickup truck and a cargo truck were clean and fun to drive. Day 1 (Friday) was an excellent experience with the front desk agent. Chad Williams is warm and made me feel like his most valued UHaul customer. I can tell he makes everyone feel that way. I am deeply connected to the community and told 7 people about my experience at this UHaul location. Day 2 (Saturday) although I wouldn't call him rude, a different front desk agent was gruff and his attitude was off-putting. I think he realized that his attitude was off by my reaction, and tried to warm up, but it was too late. One agent made me feel valued the other made me feel small. This is a great business and I am forever a customer but the second guy needs training.

All your staff had helped me a lot regarding the the pick up truck I rented and I am fully satisfied on their service they gave me. I never drive a truck before and your staff explained how to operate the truck and it was easy for me. I didn't have any problem with it.