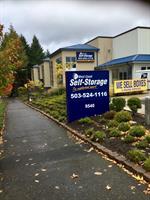 The guy who helped me from the storage facility was great. Dealing with Uhaul company its self not great, the last 2 times ive rented a uhaul theres been issues, this time you wouldnt accept my id, kept saying it wasnt valid, even though it doesnt expire til 2022, is a valid drivers license in the state of oregon and has been since 2016. When i tried to check in online the attendant was rude, did not listen to me or even look at my id it seems, when i told them that my id was not expired, they tried to say that it was a provisional license, which its not, from there they disconnected with me booted me out of the system and tried to put a note on my file saying to not rent the uhaul to me because of my supposed "provisional" license. The experience this time combined with the nightmare that happened the last time i tried to rent a uhaul, i dont think ill be using uhaul again. Customer service is key and this company severly lacks that, as someone whos been in customer service for almost 10 years, the service is just crap and needs serious changes. Moving is already stressful enough besides being 7 months pregnant on top of it, uhaul made the stress even greater and blew the time id scheduled everything for by an hour and a half. The system needs serious changes, but it probably wont happen n this will be overlooked n tossed aside.

Super fast and easy pick up and drop off!

Mobile check in was super simple and drop off was also easy. Would definitely rent from here again.

There was a minor blip and I did not receive the furniture pads I reserved. They made it right in my favor by not charging me the fuel $ when I forgot to too off the tank. Great attitudes, responsiveness, and customer service.

I really like this location because it is clean, new and close to my home. I will certainly use it again if I need moving equipment!

Our only complaint was the app for ustomer service over the phone helped us a lot and we were able to finish on time.

The mobile pickup was not available even though that is what I signed up for and went through the process once I arrived. Would have saved me time knowing I had to go inside all along.

Convenient location. Quick and efficient service when picking up rental truck. After hours drop off availability made return process easy.

guys behind the desk were very friendly and helpful.

Marcus at West Coast was great, but the Uhaul portion was a nightmare. Over a half hour waiting for approval in the mobile app and I could never get the link to work to indicate I had dropped it off.

I don't really prefer dropping off at storage locations, but the employee took the rental and it was relatively hassle free

I have already recommend West Coast SS to a neighbor.

Absolutely fantastic reps made my rental easy and convenient! Loved that it's an on-site neighborhood pickup location!

I don't like the threatening "if you break it you pay 100% immediately" I have insurance, way complicate life for people?

Prompt service. Truck was available and ready without a wait time.

Awful - I added fuel $5 - charged another $10 - we took a picture of the fuel before and after. There was glass under the red pulley tie in the truck - my daughter cut herself - not happy with anything to do with the experience - I will travel to Tigard - and this is the closest to me.

The return was harder than expected I thought that I could drop the key off and that was it but it took 45 min and a customer service call to make the app work on my iPhone it wouldn't recognize my location which after failire caused panic and having to download another web browser if was just to complicated even for a computer guy like me ....if it wasn't a failure of technology on your back end everything would have been fine

From start to finish, this was a great example of customer service and the location was flexible when I returned the truck a little bit late, it reduced my moving stress, THANK YOU!!! I will use your service again for sure.

Everything went smooth other than Marcus was unable to find a price for the blankets for about 10 minutes. I was in a rush and ask them if he could possibly just throw them in for me and let me borrow them, and he said no. He was very kind and efficient in every way. However, I feel that if he's unable to find something within a reasonable amount of time that he should have just thrown them in for me for free.

Everyone is nice and friendly, very helpful. I wouldn't change a thing.

The three different staff I dealt with were happy to help and answered my questions. You may sell more in-store products if the prices were on display.

I was unable to access the app due to my location services, however I arrived at 9:30 am as scheduled for my appointment and the attendant was late and arrived about 20 minutes later. The left front tire air pressure on the truck was low and the light never went out after I added air and the pressure never reached the recommended PSI. Also the gas tank was not full and I was told to return the truck at the same level which basically was impossible without knowing exactly how much fuel to add so I ended up filling the tank above the amount that it was when I picked up the truck. Open on time, inspect vehicles before they are rented to ensue they are properly working and ensue gas tanks are full prior to rental.

Beside my good grads for my uhaul location I was disappointed that I had fill in 8 Gallons for my 32 miles I used the van. That means to me that the van did not had a full tank. It cost my 22$. If you can do something about my extra cost would be nice. Or maybe I should rethink my recommendation to friends.

The van had a textured rubber mat on the cargo floor which made loading and sliding things much harder. Also, the step getting in thru the back door was a bit high. A lower step - or a grab handle within reach of the back door would be a big help.

Employee was sitting on car when we got there, the sign said he was supposed to be back 10 minutes prior. The online booking system was not working, very frustrating, he said he couldn't call his supervisor because he doesn't answer the phone on Sundays..... when we returned the van less than an hour later the return sign was still in window with the same time and no store employee... very frustrating.

My experience was excellent! The check out process was easy and straight forward. And the storage options were great too! I would definitely recommend this location to anyone looking for storage or a moving truck.

The pick up/drop off location could be better staffed. During regular business hours, the doors were locked when I picked it up and dropped it off.

Jamie and the West Coast Storage provide excellent customer service and I would not hesitate to recommend them over any UHaul rental and storage location that I have ever used. I would suggest to the UHaul Corporation general to not make last minute changes in pick up locations (fortunately West Coast resolved the situation perfectly) and to review and uphold a higher level of customer service and personal safety standards in their other storage facilities in the local area.

I had to wait over half an hour to rent a reserved van because there was only one person working and he was completing paperwork for a storage unit rental when I got there. Seems there could have been an opportunity to take five minutes to get me on my way quicker.

I drove 6 miles and you charged me 1 gallon of gas... for as often I as have made this trip I've never been charged a Fuel charge for so little use.... I am not pleased.... David Hooten

Super clean and ready to go. The UHAUL vehicle itself was a little smokey smelling, but other than that it was perfect.

This was the best rental experience I have had in three decades. No joke.

The gas gauge was lower than indicated on the initial paperwork when the vehicle was issued. Other than that, everything was great! Thank you!

The lights in the cab/trailer would not stay on for more than 1-2 minutes even though the headlights dial was turned to the left per the printed instructions. I had to keep going back to the cab and open the driver's door to turn the lights on for a couple minutes of light.

Great and easy u haul. Customer servixe was 5 ??

Have more u-haul trucks available of all sizes.

Customer service was very friendly! However, the rep told me to simply drop off the keys if the location was closed after parking the truck during the return. According to the contract, we had to take pictures of the barometer, the truck, and put on our mobile locator to prove it was returned. The directions for returning the truck could have been clearer.