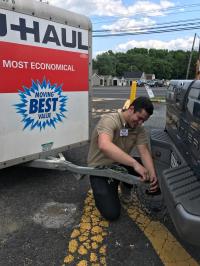 I am not sure if Brandon Knotts was the gentleman who took care of me, because I do not remember his name, but that is the name on my contract. He was awesome. Very helpful. He was even nice enough to pull the truck out of the parking spot, so I would not damage any equipment. Thank you.

Nothing. I was highly impressed by the cleanliness of the truck I rented. And the music was good too.

Gas price was misquoted by $1/gallon

Store didn't even know I dropped the rental back off, they called me the next day and asked when I was going to return the rental. The rental wasn't running as it should either felt like it was going to stall when stopped. Overall was a bad experience

Staff were very friendly and helpful. A true professional staff.

Dirt and debris from previous renter should be cleaned off trailer.

Outstanding! Every time I rent from this location, I get the very best service! Just great people!

Update the process at the counter to first rent

Keep up the great work. Very professional and courteous.

I have no complaints or recommendations. Thank you

U-Haul was absolutely horrible. If it wasn't for this location I would never use U-Haul again.

The young gentleman who handled my transaction at the front desk was awesome! His customer service and overall professional manner were admirable, in my opinion. Thank you for a positive experience

Nothing. Guy running the shop is top notch. Friendly and professional.

Truck was clean but when I stopped and shut the truck off, it was hard to restart it. On my final stop when I was going to go drop material off at my house the truck wouldn't start. I called the local number on my contract and I was on hold for 30 minutes. My wife drove the 2 miles to the rental office to let them know. In the mean while I was finally able to start it. I drove home and unloaded the material I picked up. I didn't shut the truck off, then drove it to the gas station and then to the rental facility. I shut the truck off and they couldn't restart it. For my troubles, what can you do about the overall cost of the rental?

The manager was extremely rude and informed us he indeed did not have a truck available on the day of our move. He then told us we had to travel an hour away to pick up a truck and when we asked if there is anything he could do he said, nah it wasn't my mistake...

The trailer is close to falling apart. It is way too old and rusty. It should be taken out of service as it rattles and shakes on freeways under construction. At times I was worried about my and other drivers' safety despite going 55 mile an hour. I thought the left flap would fall off and hit one of the cars.

Brandon was very helpful and very professional. Great customer satisfaction skills! The manager on duty was also very meticulous, making sure my vehicle was disinfected and was also there to answer any questions. Great experience all around.

Very helpful with the purchase of the ball mount and hooking the trailer up the day of!

Went as expected. No issues.

Service was excellent'. Quick and easy.

I was supposed to receive furniture pads which i did not... my furniture suffered damage due to this error.

It was great that it was a trailer rental and it was ok to drop it off after hours.

We had a great experience with both the Pick up and drop off of the trailer. Terrific customer service, we will be back!

The customer service at this location is beyond amazing. Pick up was quick and efficient. They were already waiting for us to come and our truck was prepared. If you are looking at renting stop at this location!

The employee was on point and very nice!

Truck riding cabin didn't appear to have been cleaned. And truck had sticker that said maintenance was due 10,000 miles earlier. It may have been done, but sticker was still there. We made it 180 miles safely, so that counts, though! The Uhaul.com/share is BS- didn't recognize our reservation number, and kept sending me in loops w no instructions! Very frustrating at 10 pm after a long day of moving!

The starting mileage was incorrect and I was charged almost double for my miles due to the error. The process was supposed to be digital, but that was not working. The associate at the counter advised that other customers were also receiving error messages and unable to use the digital process. They said they would send my rental agreement digitally, but I did not receive it until after I already left the facility. No one confirmed the mileage with me before I left. When I returned the vehicle, I received an e-receipt after I had already left. Upon learning that the starting mileage was incorrect, I tried calling the local branch and it rang at corporate customer service instead. I spoke to someone at customer service who told me only the manager could resolve the issue. She opened a case and advised that I would receive a call back from the manager, likely on Monday, as it was already late on Saturday afternoon. Never received a call and tried to call the branch directly again. Was once again bounced to corporate customer service and unable to speak to someone at the branch. The customer service agent attempted to contact the manager and could not get a hold of him, but advised that a message was left. Waited a week and tried to call the branch directly again. Was finally able to speak to someone located at the branch, but the manager was not available. The associate advised that I would receive a call back by a certain date. That date has now passed and I have still not received a return call from the manager. Bottom line - the process did not work as it was supposed to, staff relies on the figures in their computer instead of actually confirming information is correct, commitment to customer service is terrible, and I was charged almost double what I should have been. I will never use this company again.

Parking is a bit of an issue at this location.

I had ordered a dozen blankets days prior to my rental. I show up and am told they gave them all away before I arrived at 8:45am. I'm then told I can either buy them from them at $10 a piece (which is what renting 12 for the day costs) or I could drive to another uhaul place, incur mileage charges in the process, in the hopes they'd have the blankets I needed and preordered. Needless to say I was not happy but I was moving that day and had friends waiting at the house to begin. Uhaul should ensure they have stock of what a client orders and should ensure your staff doesn't just give it all away before someone who preordered it arrives. I believe I should have either been given money back for the inconvenience or given blankets you sell as my rental. Also, your staff seemed very kind of like â€œoh wellâ€ about it, with no real viable suggestion to fulfill my full order. They then claimed it wasn't even on the reservation. When I returned the truck later your staff told me that they â€œnever have blankets on Saturday'sâ€. Why offer on your website if you can't fulfill? Very disappointed and will be seeking other truck options in the future. This occurred at your Langhorne, PA dealer on Lincoln highway, 9/12/20.

We've moved our sons numerous times and always use U Hauls. In the past there was a less expensive way to move them to another city and return the truck 24 hours later. Now that's not an option. It would be great if there was a way to accommodate our moving needs at a less costly rate

My overall experience was outstanding. I only rented for a day but every person I had contact with at this location was extremely friendly, helpful and made me feel like a platinum customer. The process was smooth and efficient. Thank you!

It seems like it's the same person there everytime I rent a piece of equipment. He is always friendly and very efficient.

Everyone at the location was very helpful. Equipment was prepared and ready for my arrival. Great job by the team there.

Quick and easy service! The two people at the desk very friendly. Thank you!!!!!

I reserved a dozen furniture pads a week prior and when we went to get the truck.. NO pads , he said they ran out that morning. If I reserved it it should not of been given to anyone else. Also I wanted to pay with cash. He told me he'd rather not deal with cash and asked me to use my credit card. Which I only used to reserve the truck

Nothing at all, he was attentive, friendly and funny. Simple easy exchange.

Very helpful and courteous, always a positive experience at this location

Very friendly person at reception. He made the process easy and faster.