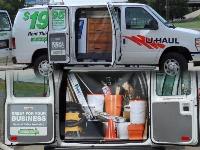 Please see that the computers are up to date and there are no double charges as in my case today on returned to this location. Thank you., Over all its always a plus to rent from this point.

Nothing, the employees and management were a delight. Maybe Christmas bonuses?

Allow me to reserve a rental online for longer than 24 hours.

Our experience with your company was exceptional!

After hour drop off was safe with plenty of lights and cameras.

I used 24/7. Was annoyed having to take all those pics in the cold and the dark. Besides, I'm guessing you don't trust customers' input and check gas gauge, mileage and condition regardless.

Clean outside windshield and windows. Inside tuck was clean.

Awesome friendly service from Nigel and the gal at drop off!

Nigel was awesome during the rental.

They even cleaned the connection to the trailer.

Said no to recommending only because I would never trust U-Haul to get it right.

The Lady owner? Was able to work out my needs promptly and kindly

They did a good job.

Pick up rental, allowed to tow your own trailer, is a great offering. Worked out perfectly.

The windshield was filthy. Everything else was satisfactory.

In and out in about 10 mins.. The staff were attentive and friendly.

Windshield had not been cleaned. My only complaint

Nothing! It was great!

Nothing. The staff were professional, helpful and pleasant

My starting destination initially provided me with a locked/used UBox, so I had to be issued a second contract number. They said it wasn't a big deal, but I requested another contract printed with the number as they were not going to provide one (something felt off). Box was sent cross country without issue and arrived earlier than expected. Two weeks after I had emptied my things and thought I was done, the final destination called asking me for my box back--they thought I had a second box. Had to explain that no, I only used one (and they should have known such given that only one arrived, no?). On top of that, I was billed for a month of storage on a box I had already returned. The manager said something was amiss and couldn't close out my account; presumably because of the non-existent second box/second contract number. She said she'd refund my rental cost. That didn't happen. Called the national customer service number, who told me they couldn't do anything but leave word for the local location; never heard from them, either. Once I was charged for a second month of storage, I went to the location in person to get matters tended to once and for all. The rep at the counter was helpful; the manager was so indifferent (even though she had spoken to me a number of times on the phone). Said I was all good, though a refund has yet to appear on my online statement. I'll remain skeptical until I see it. I've used UHaul for a number of years and moves (both in town and cross country), but this was such a souring experience I may utilize Penske when need be in the future.

We also have a storage unit in Anthem Uhaul. Have been pleased with both

Our experience was great. Not only was our CSR courteous, but quickly prepared our retail invoice without any trouble. Thank you for great service.

It would be nice if the units had a light inside the unit. It is difficult to see inside the larger units. Motion activated lights would shut off after use so the light would not stay on after use.

Issue with check engine light coming on as we started the trip to Winslow, AZ. But, truck made the trip with no problems. We worried about the problem in route. We enjoy doing business with U-Haul.

So you out a surcharge if we bring gas lower than given. But you don't pay up when we bring more gas than expected. How selfishly convenient. You have broken my conditions of rent.

I mentioned the gas situation and he said file a claim with U-Haul.

I can'f think of any way to improve upon what seemed to me to be performance excellence in every possible way.

The radio did not work, and the location I originally choose did not have my reservation when I went to pick up my truck. They moved my reservation to another location without notifying me. That experience was frustrating.

They treat you like family. Thanks, guys and ladies!

I was supposed to pick up my truck 90 miles away in Holbrook, AZ, but somehow none was available despite having made my reservation a week in advance, so I had to drive an extra 180 miles round trip to get a truck. The Flagstaff employee did his best to rectify the situation, but the scheduling mess will make me hesitate to use U-Haul again.

I did not like the online check in process as it required me to pay a second time and that caused problems with my credit card company. I won't use it again if this is going to happen each time.

Everyone at this location was fantastic! Great experience.

I was supposed to pick the vehicle up after hours but there was no vehicle left for me.

You can make sure that your overhead door opens so the movers could pick up the U-Boxes. Don't promise a time that your door would be fixed and then it's not. I had to wait another day to have the movers pick up the boxes, this delayed my move. Will I get any credit for the inconvenience? Kurt Haenisch, 4!14-303-0806

It was excellent and accommodated my unique needs with storage etc., although ran out of wires for car trailer and had to wait for fix.

Two 7’ sofas would not fit into storage units because hallway too narrow and door too short. Storage unit height too low. A tall person cannot stand in unit without bumping ceiling or fire sprinkler pipes. Water fountains obstruct hallway. Why not place fountains in storage building lobby instead?

The staff is always very friendly and helpful.

The services I am referring to are based on professionalism and knowledge of the entire services U-Haul offers their customers. Representative was excellent in both areas.

Kathy has been excellent. Very understanding and accommodating. Thank you!

Very well treated at both ends, Boulder and Flagstaff.

Online booking and check in were easy, facility was clean and easy to navigate

Very helpful staff. Check out was a breeze thank you Michelle

very accommodating for your needs.

I am very satisfied with the storage unit and the truck rental.

Everyone was pleasant and helpful even when busy dealing with stressful situations. Suzy, who works in the storage building, went above and beyond and deserves quite a pay raise!!!!! Seriously!!!!!!!!

Kathleen went above and beyond to help work out a situation we had for a locker rental. thank you, B.

Storage facility is excellent, staff is friendly and helpful.

Beyond happy with my experience Susie is amazing!!! She helped as much as she could and she’s the reason that makes you want to go back!!!

Great experience throughout the process.

Friendly and hard-working staff, on the phone and in person.

OMG! Suzie provided me with OUTSTANDING customer service. We viewed the available units which gave me a better understanding of how my items would fit appropriately. She smiled! She made me LAUGH.

The trailer pulled great but your employees are your stars. Even Diane in your phone customer service is an angel in disguise. She was extra special but all others were above great service workers.

I’ve never been more disappointed by a company. Multiple reservations for various services have been neglected & the staff flippiant over their mistakes. Jordan D. is the only good person there.

I am very pleased with my experience with this Flagstaff U-Haul. The storage room was clean and well taken care of. I plan on renting a storage room again next summer.

There are nails and screws all over the ground. We we're so worried all the tires on our truck and trailer would be flat by the time we left and drove the 130miles home. I took a picture if you want i

Units are overpriced and then I’m told that im required to buy not just any lock from uhaul but the most expensive one you sell. And I can’t access my unit any time? Ridiculous

Worked perfect for our move from SW Florida to Sedona. PODS would only bring boxes to Phoenix. UHAUL got them all the way to Flagstaff and Mystic Movers brought them right to ur front door.

Store building itself was fine. But you can't get a hold of anyone. Calling the number listed directed you to the 800 customer service. Can not get in touch with anyone local unless you go and wait

The rating is due to the online billing system. You get a reminder a week before rent is due but when you go to pay, it shows a zero balance. You then get a late fee statement. It is absurd.

Saturday morning, there was only one clerk at the front desk and she was doing something on her computer while there were 6 unhappy customers waiting in line. I waited 25 min to check out! Bad news

I tried calling at least 3 times to determine if my U-Box had arrived. Each time I was unable to talk to someone at the facility but instead was directed to the call center.

The staff was amazing!!!

Terrible facility!! Puts you down for auto payment but doesn’t message you every month and let’s the payment rack up until it’s $600+ and asks you to pay it all and if not they’ll give away your stuff

The staff at the Flagstaff center were fantastic. Professional, knowledgeable and friendly. They helped me empty 5 u-boxes in one day!