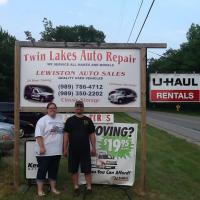 Lots of inventory and good location for servicing the Lewiston, MI area. Pick up was a bit inconvenient. Arrived 30 minutes early from scheduled pickup time but attendant wasn't available until 5 minutes after scheduled time.

I rented the car dolly in Gaylord Mi several weeks in advance and wasn't happy about having to drive 35 miles to pick it up the day I was supposed to leave. It disrupted and delayed my travel plans.

I dropped off the trailer in the middle of the night so I only had interactions with the online instructions. Everything went great.

The only think was I ordered a 10ft and the guy never brought it back. So thankfully the lady gave me a discount and a bigger truck 26ft. Wasn't really upset but was happy the lady worked with us.

Check engine light started flashing ran the code and it was misfiring from Michigan to Tennessee and the truck drank fuel, electrical system has issues cause some times I had head lights and brake lights had to have wife follow. People ask how come you didn't contact anyone well easy answer, as long as it still was running this 26 foot truck was packed with everything my family owns. Told when I returned the truck I was given a 1-800 number

I filled the gas tank at the nearest location to the drop off location. As this is a rural area, I then had to drive a few miles to drop it off. After dropping it off, I received an email that I was charged $3.16 for extra miles & $0.19 for rental tax. Really?? I didn't feel that was fair.

Beth was great in getting us set up. Highly recommend .

You can't improve on perfection. Smile. They were great to work with. I M very much satisfied.

The only complaint that I have is i have to make a 90 mile round trip drive to this location because they were the only location that had a Auto Transporter. There were 3 Transporters at this location while no one else in my area had any. It seems U Haul should have a better way to distribute their equipment around .

The people here went above and beyond to help and provide the best experience i could have anywhere. Thank you

Put a trailer jack at each location so it aids in returning the trailers after hours.

The run-through of the trailer was all good

The pickup location was simple and owners were very nice and friendly. We did have to buy windshield wipes for the truck as the ones on it were very deteriorated and did not clear the windshield. Other Than that truck was fine.

Dropped off unit on a Sunday. Business was closed. Handled process myself

They were having internet connection issues, but otherwise very good.

The lobby waiting room was very dirty not very nice. The area is very rural and has no Internet or phone signal to do any kind of online help. The location was over 30 miles from my home so not very convenient. I had to switch to this location because even though I reserved one in my town of Gaylord I was called and told a trailer was not available. Because of the extra distance I was told I could pick the trailer up on Thursday and still drop it off Sunday with no extra charge. I got charged the extra day. Overall a very bad experience and I'm not very happy with U-Haul.

Very pleased with service - over and above!!!!

Very patient and very efficient. Twin Lakes auto repair was excellent. She had so much patience because the Internet connection in Lewiston is very slow at times and spotty which has nothing to do with Twin Lakes and everything to do with Frontier and/or Verizon lack of towers and just spotty internet service from these companies but she stuck with it and rebooted the computer a couple times and was able to get us our 26 foot U-Haul. So thankful for Twin Lakes partnered with Uhaul. We highly recommend them

I was moving my 82 year old father who had lost his wife of 34 years, uprooting him from his home and moving him to Cleveland. He lived in Roscommon and we needed a 20 foot van and a car transporter, after we placed the order, we were informed that we would be required to drive an hour north to pick up the van and trailer. Although I was not happy with this, I had to focus on getting him moved as I had to be back to work the following Wednesday, so I agreed to go with my father to get the equipment. I called the morning of the pick up to confirm to truck and trailer were there and I was assured that they were. Upon arriving I was informed that they had the truck but the trailer was in Atlanta Michigan which was another half hour away. Well, what could I do? We were loading his home, his car, in fact his life that day and the next and I simply had to do what needed to be done. I don't know where you come from but where I come from, that is not how business should be conducted. Why when there are U-haul facilities in Roscommon and Houghton lake and I had ordered the equipment 2 days in advance would you think it was appropriate for me and my father to travel a total of 3 hours out of our way to obtain the truck and trailer we needed to move him? The complete and utter incompetence that I experienced with U-haul in Michigan were fortunately offset by the excellence I dealt with in Cleveland. Although the people I dealt with in Michigan were very nice, the circumstances I had to deal with were completely unacceptable.

Elizabeth very helpful in planning our next potential rental arrangement.

The trailer was very old and in bad shape. One of the tires fell apart on our trip home. We barely made it home.

The nice folks at Twin Lakes Auto Repair were great! They are friendly, helpful and knowledgeable. I have rented from U-Haul many times but these folks are the best!

The woman who rented me the trailer was knowledgable, friendly and efficient.

Improve computer training. Should not take so long. I've rented from other locations and was done in far less time

Convenient, I dropped the truck off after hours. It was easy to find.

No walk around or walk through.

They were closed it was Sunday so I just left contract in drop box.

We had a family issue that caused us to have the truck an extra day. Twin Lakes was extremely helpful in keeping our expenses down. Wonderful people!!

I initially was going to pick up a trailer at Gilchrist trading post in Atlanta, Mich. When I called them I was informed that "The U-haul computer system is down and may take 24 hours to repair" so "we can't rent you a trailer" I had to drive 15 miles further to pick up a trailer. There should be a procedure for renting by paper form.