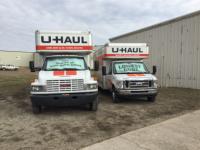 We arrived at the location and there were three trucks parked up front. When I went online to click the found my truck button, I realized all three trucks parked out front were not mine. I was already rattled, that the pick up location was changed from DJ Lube and Oil To this place in Sulphur Spring. Now I was even more rattled because I couldn't find my truck and U-Haul was not answering. 1:30 wait time. I was about to leave, and out of my rear view mirror I saw another truck parked at the back of the property. Not parked out front like the instructions said. Not only that, but there was no dolly.

Very easy to turn in equipment here. Everyone was so kind and helpful. I would definitely rent from here in the future.

This is a barrel business that rents Uhaul on the side; location not as clean as pick up due to this.

Lindsay was super helpful and I am happy she was able to help me with everything I needed!!

This vendor help me out tremendously. Texas Barrel was great and they went above and beyond to help me.

My only comment is on the truck itself - it was brand new truck, so no issues there, but the RAMP on this new truck is WAY TOO SHORT (26 foot truck model) Parked on FLAT concrete storage unit lot, and the ramp was so steep that you had to have one person pulling and another person pushing a dolly up the ramp with just boxes - furniture was even more difficult

I dropped off after hours so I cannot rate.

Final receipt included charges for extra miles. The total miles driven were not in excess of the miles provided at rental location. It was a small amount, but now I don't trust this dealer and wont use them again.

They opened on Sunday morning just for us to pick up uhaul. Lady there was very nice and helpful.

Overcharged us and hasn't made it right. Had less than 24 hours and charged us $205.33 said they would make right same day and hasn't yet.

I have used Uhaul for over 35 yrs for many different purposes in many different States and have always been Exstreamly Satisfied. On occasion I may run into someone at a location that may be somewhat slow in the pick up process, but when they reach out to Uhauls support team, the issue or confusion is Quickly resolved! Great Job Uhaul, I can't imagine how you do so well in so many different markets, with so many different types of trucks and trailers. But however your doing it works. Thank you very much! Billy- East Texas

The folks at this location are extremely helpful. They helped load purchased boxes leading up to the truck rental, loaded blankets, hooked up the car tow trailer and explained the operation of the truck and trailer in detail. They even gave me directions to the nearest easy access gas station. If there were six stars they would deserve all of them.

Make sure that the equipment works properly and now inconvenience someone

I would recommend ensuring the cleanliness of the trailers. Other than that, extremely excellent people and location! Better than all of the rest in Sulphur Springs!

Harold was outstanding and very friendly.

This place charged me for 2 days on a 1 day reservation. I brought it to their attention on site and they assured me that nothing would be charged to my credit card until I returned the truck so they could charge for the mileage. However my card was charged for two 2 days for the truck, two days for the dolly, 2days for the insurance on a 1 day reservation. They told me once I turned the truck in it would credit my card for the additional day. I returned the truck prior to the 24hrs mark with the same amount of gas it had when I picked it up. I was sent a new invoice for 131.98 that I would be charged, in addition to the 152.30 that had already been deducted from my account. I called them because my new invoice charged me for 62miles when I only drove 12miles. I explained to Macy that I moved in town and there was no way I drove 62 miles. She suggested that the people who drove the truck for me took a joy ride. I informed her that I don't run around with trash and no one took that truck on a joy ride. I really did not appreciate this comment. Me, my kids, two of my female coworkers, and my fiance loaded, unloaded, that truck 3 times after working all day and having to get up early to go back to work in the early am. We picked that truck up at 1600 and returned by midnight. We worked hard, took care of that truck, returned in good condition. So to have her make a comment like that was very insulting. I explained to her that she needed to check the ending mileage on the last person invoice as there ending mileage would be my beginning and that was a mistake somewhere. I told her if I had to get everyone that helped me move to call Uhaul I would because we didn't drive 62 miles. We drove that truck so little that I didn't even have to put anymore gas in the truck. If I drove 62 miles I would have. From the company to my old house was 3 miles, the we made 3 trips to the new house which round trip is 2 miles, so that's 6 miles, plus the drive to return it was 3 miles. She then said well it looks like someone may have transposed numbers, that my beginning mileage should have been 6499 not 6449. She said they could give me a refund for 44.50 but I would need to call UHAUL about getting the 152.30 added back to my account since they were gonna charge me an additional 131.98. I called Uhaul and was told that once the 131.98 was billed to my credit card I would then have to call them back, get a reference number, and then call my bank and give them the reference number in order to release the 152.30 back to my card. Are you kidding me??? What an inconvenience!!! So now a 1 day truck rental that should have only cost around 80.00 has now resulted in 284.28 being charged to my credit card. And I have to call uhaul back and get a reference number to get my 152.30 back? A charge that never should have been charged to my credit card because it was a 1 day reservation!!! While I'm on the phone with uhaul I get a call back from Macy who leaves me a voicem

The air conditioner did not work! To much drag on the gas petal. Ankle was sore from the need to press so hard to keep it moving along. The truck was clean, but not maintained.

They even called the next day & thanked me for leaving the truck clean & blankets folded.

The customer service was great and we'll definitely rent again.

Great customer service . Trailer was in like new condition.

There is absolutely nothing you can do to improve on this location in Sulphur Springs, Texas for the next customer. The owner and employees at this location were EXCELLENT. They were the nicest, friendliest and most helpful people you could ever encounter, and they knew what they were doing. My experience with this company was one of the best!! They helped me get the right truck and auto transporter, on which I towed my car, and the truck was a newer one, which I desperately needed, because it has an "tow/haul" feature on it which helped me navigate Raton Pass in Raton, NM. I navigated this pass once before in another company's truck and car trailer and nearly lost the entire thing because of not being able to manage the speed going down the pass. The U-Haul vehicle's tow/haul feature enables the truck to control the speed going up and going down steep inclines. It was amazing! The owner and employees at the location in Sulphur Springs, Texas are all amazing. They were like family, and I felt very well taken care of. They explained everything and when I left there, I felt very confident because of all their instructions. I GIVE THEM A PERFECT RATING.

All in all, excellent but did not goes as planned. U-haul does not have a car trailer big enough to fit my pick up truck for transport, so needless to say, I could not transport my personal vehicle. I hope that U-Haul will fix this problem. I will continue to do bussiness with this company. I do believe that U-Haul is a very good company. Especially the people here in Sulphur Springs, Texas where I rented from, are very good people. Thank you for your help in this matter and again for the good and very kind people here in Sulphur Dpings, Texas. People like these people don't get no better than like the people there at Texas Barrel Supply. Sincerely, Lane Pruett...

The people were friendly and helpful; however this appears to be just a pick up and drop off location. No supplies, no signage regarding products, no indication that there were any supplies. Difficult to find and located on a poorly paved street.

Denise was very helpful with our changing plans and was able to help with our moving needs. I will be going back to see her when I need another truck.

every one was extra nice

This Location is just absolutely outstanding! Hopefully I wont be moving anytime soon but I know for sure this is where I'll go. The people in the office are so helpful and make sure to get everything done quickly and thoroughly. Best U-Haul dealer I've ever been too.

Good representatives of U-Haul!! Thanks!!

Make sure the vehicles are clean

Not much need to improve. Trailer pick was a breeze. And turn in was even easier.

Denise is amazing. We have been using her for years. She is so polite and helpful and bends over backwards for you and makes sure you are happy. She always has a smile on her face and laughing. Very good atmosphere from everyone here and they are always so willing to help! Thank you Denise and Texas Barrel Company for all your dedication to us!