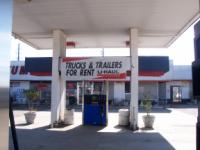 The amount the mileage is; it's very expensive, the down fall is if I ever had to rent again I won't be traveling far at all...

The young man at the counter was very helpful & professional but the older gentleman was a terror. He accused me of damaging the truck after his inspection. I advised that I did nothing to the truck and it was being returned as rented. He stated that a walk through examination should have taken place at the Houston pick up which did not happen; I was told the truck # and rental was complete...no walk through. He also asked if I had purchased insurance which really did not matter if I had done nothing wrong. The young gentleman was able to pull a picture of the truck up to confirm that the damage had been on the truck; now could not this old unprofessional redneck done the same thing. I will NEVER shop at Stomps or use as a drop off location in any future rentals! Bad representation of your company!!

Your website sucks. It takes 45 min to rent even when you pre- apply. Your people are great but every time I have rented from uhaul it takes longer to rent than it does to do my job. Ya'll need to seriously upgrade ur website!

This is the worst customer service from any company I have ever received. I waited very patiently for 40 minutes for the dealer to try and figure out the system. He could not figure it out. I then decided to call the uhaul main number to try and fix this for myself. I was on hold for a total of about 15 minutes after getting passed from one person to the next. I spoke with a customer service person for about 45 minutes and she was unable to help me stating " I am not going to lose my job by letting you take a trailer". I was not asking for anything unreasonable. I just wanted to pay for the trailer. I guess it could not be done because the trailer could not be dispatched and therefore I couldn't pay for it. I asked her if there was anyone in the company that could allow me to pay for the trailer. She said "no there is not". I was trying to give the company money and no one in the entire company could take payment. That is insane to me. In the end, the dealer just allowed me to take the trailer without signing anything or making any payment. This whole ordeal took around 2 hours. After all of this, it got home so late that I didn't even have time to load my trailer that day. I had to load it in the morning and then drive over 8 hours. This put extreme amounts of extra stress on myself and my family. I cannot recommend any uhaul services to anyone due to this experience. Unless I have no other options within 3 hours drive, I will never give another penny to uhaul.

I would love for someone to call me ASAP

When we booked the truck I looked at locations near me, when I received the text about my reservation they did not mention that the pick up location was an hour away. The website also didn't mention the pickup location being vastly different area from my listed zip code. This would have been very helpful as we lost two hours of my time with the extra traveling not to mention the added mileage on the drive. The pickup location is not labeled U-Haul or U-Haul affiliate, I went through the cell phone pick up prompts and you still do go inside to pick up the truck keys. The online service took longer than anticipated due to lousy cell phone signal in the area. The online check in requires multiple photographs which can take some time to upload. And then going inside and having to explain the rental and online check in all over again to get the keys.

The riding it rides bad,it was clean and real good on gas just a bad ride..

I believe I was over charges for my days I tried to contact a rep and no one never called me back.

Got our haul trailer the same day. Just what we needed.

This facility and their employees were accommodating. However, I was informed once I got there that I needed to turn in the truck hours before my arrival..I have NEVER rented a vehicle before and therefore was unaware. This incident cost me additional funds that I couldn't afford. I feel ripped off!

Give the turn in location on one way rentals.

They people did not know what they were doing. I waiting for almost an hour to get the truck rented.

The agent was very polite and friendly.

Be available and inspect the equipment.

Equipment was extremely poorly maintained. I asked questions about the condition of the equipment and the answers did not make it clear to me that maintenance is ever performed on the equipment. I used a car tow dolly. The wiring for the tail lights was unusable. The straps were old and worn and the ratcheting device was in awful condition. The latch for one of the ramps was broken. The dolly I used was one of two at the location and it was in better condition than the alternative. I was in a bind and needed to move a car immediately, so I had no other option. I would never use a car tow dolly from Uhaul again based on this experience.

The original drop off location was supposed to be mini storage in gramercy,LA on w railroad ave when i arrived at this location they were closed and there was no 24 hour drop box as indicated online when i booked i called and was advised to drop off at stump shell in gramercy,LA which made me late for work my overall experience was a nightmare

check the equipment and make sure everything is properly secured.

The equipment i rented was old and rusty parked in a field with 2 feet high grass around it.

When I went to inquire about renting the uhaul truck, I was given a completely different price than when I called in to retrieve a quote. Once I retrieved my quote and reserved the truck I went back and only because it was a mile or two from where I was moving, I made the decision to use this location. Upon my arrival the guy who does the renting wasn't there so we waited for him for about 25-30 minutes. He not only pulled up to one of the pumps to put gasoline in his personal vehicle but he walked to the mailbox, checked the mail, then put the dog he had up, then walked in the store. I was waiting in my vehicle when I saw all this going on. While doing the transaction he got an attitude when I told him the uhaul representative told me I could use cash and I didn't have to use a credit card if I didn't want to. His response to me was, well she's not here and this is what they (the computer) is asking you for. I stayed calm completed the transactions giving him a pre-paid card, because I was afraid of him over charging my card. I took pictures of the uhaul prior to my using it with him in one of the pictures especially since I saw damages to the truck already. He also lied about when I could return the truck, saying that I had until 6 that evening, then I told him that the uhaul rep. said I had until the next day. He just looked and said nothing. I returned the next day, and again he was not there which meant that I could not get my money that was due to me. However, although the guy who was there the day before and could not help me, he was eager to take the keys from me. I was very skeptic,a asking him to call the guy but he kept saying he was sleeping and would be there for 2pm. Anyway, I had to return to get my money and he did give me my money and said nothing. I would never do business with them if they were the last ones left, I will plan ahead so that I can rent from some place else, when I move again. The service was poor and I really would hate to know how many people he have over charged and pocket the remaining amounts. I think there should be a flyer with all the rates on there so no one can just give pricing after all UHaul is whats written all over those trucks and well known and that's why I have always used UHaul, just never that location and never again either. I don't hold Uhaul responsible for his behavior but I do expect change with the future customers.

Location is a convenience store. There was only one employee available. As long as there were customers in the store, I had to wait until they finished their transactions and purchases until I could complete the return. The employee was very courteous, but the location needs a better process.

This location needs to be updated. Even with proper registration and early checkin they take forever and go through the entire process anyways.

Gas station was a dump. Employee couldnt get computer to rent out equipment I had reserved. UHAUL customer service was rude to him and did not want to help him.

Trailer hitch was loose. We had to place wood wedge under the tighter lock to maintain lock. also it was not ever tight against the 1 7/8 ball. But we made the trip with no problems. Told Ashland about the problem

To long to get paper work done

They did not know I had reserved a truck. I had to wait over two hours for one and lost half my moving help thanks to the delay. That two hour delay cost me a day's travel. I would not use this service again.

Location is a major issue - the store was dirty and not organized. the truck itself was also very dirty. The location had no furniture pads or furniture dolly???

Trailer was located outside of a rural area convience store and was full of trash (ie: soda cans, cups, candy wrappers, ect.) Also one tail light was not operating properly.