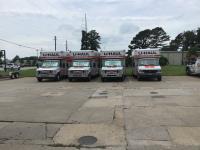 The Uhaul was smelly and very dirty. It is suppose to be an easy to a pickup and it took longer than 5 minutes for him to even locate my reservation. Then there was a cleaning fee that was being charge that I disputed because the Uhaul was dirty to being with.

There was no one available to help me put the trailer on my hitch, verify my electrical worked, or help me at check in/drop trailer when I returned. It is a convenience store and they could not leave the register or the merchandise to assist.

Was charged for two days and two safemove charges when it should have been one of each. I was refunded $51 and change from the location but to my knowledge it should be more like $55. Do not have time to call and sit on hold for $3 credit please remedy this situation.

Just took a long time to complete..busy W others buying misc in store

The entire process was very easy. The truck was immaculate and the return after hours was convenient.

First, this is not the location requested. The location was an additional 20 minutes away from the original Haul center. Second, the location is a gas station with very little space to leave your vehicle while renting the truck. The location did not appear 'safe' or 'welcoming'. In short, I would drive past this gas station if I needed to fill-up. Let alone rent a truck/vehicle from here. Lastly, did not receive the dollies requested in the original submission form. Would not use Uhaul again or this location.

There was only one person to man the store and deliver the Trailer. He did come out to help attach to hitch. BUT did not offer to review the aspects of how everything works! Other than giving printed pages on directions.

The wire harness from the truck to the hauler was frayed causing us to loose running lights halfway through the trip. The fray caused the wire to short out and blew 2 fuses in the truck. Finding a uhaul dealer to change the fuses was not easy. This caused us to be delayed several hours in our trip.

The appliance dollys were not in the vehicle. We had to go to a second location 1 and a half hrs later, 20 minutes away to rent an appliance dolly. The only help we got was from on line folks. The haul pick up worker at the location was not helpful. He told us to call the # for help. Nothing opened until 9 or 10. Not helpful at all. The phone people were very helpful! Without them we would have completely been messed up for our move.

Car hauler hand crank for the tongue jack needs lubricating. It was very difficult to operate. Otherwise, the trailer worked as expected, very well. All lights worked, chains and tie downs were available. Great experience. Thanks.

Fantastic! I will use again. Thank you so much

Use them quite a lot.

The taillights didn't work and I had requested a refund since we brought it right back but was still charged anyway. The guy we rented from was rude and discriminative toward women. I've hauled trailers for 16 years and he just kept telling me I was doing it wrong and being very condescending.

Require that your associates wear masks.

The original reservation was at a different location and I did not receive a change notification. Rushed across town to get trailer after wasting 1.5 hours. Upon my return , after watching me park the trailer and i was informed It needed to be moved to a different spot. Awful!

Please ensure all equipment is in the uhaul. Missing furniture pads

When we showed up the size of uhaul That we reserved wasn't there and when they called the people they said they still had another load to do. They weren't very nice but they did give us a bigger uhaul for the same price... costing more for gas though. Then since it was a gas station we showed back up about 5 min to 7 to fill it up and they told my boyfriend they weee closed so he had to go down the street. Which is fine but he put 15 in it and the. Realized it still wasn't full and had to end up putting another 20 in it and the gas gadge still said it wasn't full even though the gas was spitting out.. make me think it wasn't full when we got it because we only drove around 70 miles. Also the uhaul itself could use some work. My boyfriend said it felt like it was going to fall apart while he was driving it. Will not be going here again. Thanks for at least letting us use the uhaul

Quick check-in and out.

Keep up the great work!

I originally reserved a U-Haul from a location closer to me. I arrived at that location and they had no equipment available, causing me to go to a further location. Now I'm being charged for additional miles that I wouldn't have to pay if the original location had the equipment that I reserved.

I had rented a refrigerator dolly as well as furniture blankets, but when I went to pick up the truck, these items weren't included in the contract. The issue was quickly resolved, but I'm not sure where the disconnect happened.

Great location with exactly what I needed. The gentlemen who helped me out were quick and everything worked out without a single problem. I will return to this location if I require equipment again.

I am disappointed that I was charged another days rent because I was over my 24 hour time by 28 minutes! Further when I returned the truck there was no mention of a $40 late charge for the 28 minutes! I will only rent from this location because it is close to my house.

Being the in the service industry, I would rate this location as one of the WORST places of business I have ever visited. The person (owner) who waited on my was belligerent, insulting, did not listen, would not answer my questions, and very demeaning. I should have just walked out and went somewhere else, but I had to get to moving. If this person worked for me, he would be immediately terminated.

Get someone who knows what there doing and can problem solve

This part may have been worse than my pickup experience. After again following all the steps on my smart phone, (putting gas in, taking pictures of odometer/gas gauge/location I parked the truck) it told me that since I was dropping the truck off earlier than I originally stated, I was going to be subject to about $50 dollars in extra charges. I pushed a button that said I didn't agree with the charges, and it said a representative would contact me in 48 hours. No problem. It then said I was finished and to place the keys in the drop box outside. Well me being a nicer person, and it was the middle of the day, I figured I would just hand them to the clerk inside. BIG MISTAKE. I opened the door and said "would you like these keys in the drop box or can you take them?"... He YELLED at me "No! No no no, I have to come outside and take pictures of everything and you need to put gas in..." I very calmly explained I had already done all these steps as I was utilizing the online check in tool. We wouldn't let me leave the store while he tried to find me in the computer. Other customers were coming in and waiting behind me with soft drinks and snacks (this was a gas station) and it started to make me feel bad/awkward. He finally found my account and it clearly said on his screen I had completed the return, but he still wasn't satisfied. Finally in an extremely ride and dismissive tone, he shrugged his shoulders and just said "Ok whatever". I again, tried to explain to him more carefully that my phone had just told me to drop off the keys, and I had already completed the necessary step by step return directions. Again, he just said very rudely "okay". So I turned and left. Based on my terrible experience picking it up and horrible experience dropping it off, I won't use this company again. I'll use Budget or some other truck service.

I wouldn't call the place "inviting" but it appeared clean.

There was nothing wrong with the location per se, but it was farther from us than we would have preferred. Our chosen location did not have the van we wanted, and rather than asking, Uhaul assigned us to a location that was several miles distant. There is a closer location in Springdale that looked as though it had the equipment we needed. We would have been happier to be given the option of going there.

The people working at this location were not service minded No one was willing to help attached the Tow Dolly to my vehicle I was very disappointed with their lack of service or concern for my needs. I will never use this facility again

The vehicle steering did not feel safe steering wheel is not straight and seems to be a lot of play. Looks like someone had a coke explode in passenger area ceiling. AC did not really cool us down. There was a two wheel dolly in back and blankets in back just laying around. The blankets did come in handy and thank you you for that. I am needing to use a rental again next weekend. I will be looking for a better deal either from uhaul or competition. Willing to give you guys another shot if your team is willing to make us a better deal on truck for the weekend. I am all About 2nd chances. My cell is 479-365-9854.

The first person I spoke to could hardly speak English and was not very helpful or friendly. The drop off I had been told to go to sent me away cause he was full, and sent me down the road to this one. Stop & go sent me away too because I was not in the system for drop off. I had to be at teacher conferences with my kids so I had to park in a Wal Mart and walk there since I still had the trailer. My husband called and got me in the system at Stop & Go and they did take the trailer after that. The second guy who helped me was better than the first. Friendlier and more helpful.

What a wonderful place. The owner is amazing and so very friendly. This was my first interaction in my new home after arriving in AR and she set the tone for a wonderful start. I was treated with kindness, and professionalism with a great deal of understanding. The next day I also met a gentleman who was equally as wonderful. This is what true customer service is all about! I'll always visit for my gas needs, rental and store items in the future. Thank you.

Be knowledgeable about your business.