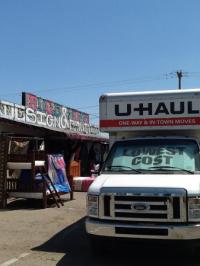 Always got what I need

Put an actual U-Haul sleight sign. Pulled into the dirt/rocky driveway and couldn't even tell if I was in the correct area. Walked into the rug shop and was like, do you know where to drop off a u haul.

I picked up the truck on empty put gas in it was told id get a fuel credit for getting it empty, keep in mind I reserved this it's not like I just walked in then got cheated out if the credit for fuel

No one was there to guide us thru the return process. I ended up dropping the keys into the drop box without knowing there was a list of instructions and pictures I needed to complete beforehand. We were not warned or made aware there would be no one available when we first picked that location from the Fresno office. The location was closed and there was an odd vehicle parked out first with an individual just staring at us. This made us feel unsafe and rushed.

Location was easy to find upon return. Staff was very professional and helpful with the return process.

Charged us for two Dolly's and never gave them to us. Wouldn't even refund the money when called to their attention

This location has such friendly service! Even amidst the Saturday morning craziness, the staff worked diligently to help everyone get what they needed. Truck return was simple and smooth. Moving can be such a nightmare, but this UHaul location made the process easier for my family. Thank you!

Not send customers to different locations after setting up pick up and deliver reservations.

The U-Haul representative was friendly, efficient, and competent. The trip to Sacramento was comfortable. Addition of cruise control and an unloading ramp would have made the trip and unloading even better.

They have the cleanest U-Hauls in Visalia

Dont overcharge so that you dont have to refund the money back. Its an inconvenience for everybody!!

Overall it was a great experience, There was a girl named Sammy who helped me at first, she had a little bit of an attitude and didn't know what she was doing but luckily Abdul came to the rescue, he was amazing if it wasn't for him this might have been a horrible experience with Sammy. Thank God for Abdul!

Easy check in and out. Definitely returning

Reps at the location were courteous , professional and helpful

We were greeted when we entered and helped immediately. The checkout process was efficient. The truck was clean and we had no problems.

It was a furniture store with u=haul as a side. They weren't to professional and I needed a adapter to hook up the break lights which they didn't have. So I drove to the main U-haul facility with the trailer and bought one. Every U-haul rental I've went to has had adapters to hook the breaks up, most are very professional, this place was a a bad example.

Very helpful was so please with the service that I put in extra gas ??

Very helpful attendant and not busy

At least clean the windshield for customers.

Drove 23 miles. Filled the truck w/ 2 gallons of gas before returning to compensate what I used. Returned the truck @ 9:30 AM. Nobody in the office. I was told to drop the key in an orange box. Got my bill and I was charged $51 for gas!!!! Why??? It's rip off!! Never again!

Our scheduled location for pick up was closed on the day we were supposed to pick up our equipment for our move out of state. It turns out, the owner or manager or whoever didn't show up to work that day. We went to another uhaul store in our town and they were unable to help me at all. All they said was that I would have to wait until the next day for a vehicle. After being on hold with customer service for a half an hour with no answer, finally a different manager than the one that didn't show up called me and asked if I was still interested in the equipment. He did his best to get us what we e needed but we were still missing the dolly we reserved. The next day, while driving through the desert in over 100 degree weather, the AC stopped working. They offered me more miles and an extra day to rent the equipment, both were useless to me. I'm so disappointed in how uhaul handled the entire situation. To rent $1100 worth of moving equipment, we expected a whole lot more out of such a large company.

The drop off associate was professional and completed business quickly.

Check out and check in should be 100% by phone where instructions are demonstrated in video. The clerk of the business didn't seem to know what the app is telling customers to do. I had to drop off the truck after hours, which the app keeps advertising you CAN do, and I found that the key drop was taped over with the message, "Out Of Order" (which is super unhelpful in telling customers what they ARE supposed to do with the key INSTEAD). Without any options other than locking the key in the truck, I ended up cutting the tape so that I could put the key in the only secure place I could see, the key drop. I felt like much of my time/money was wasted with this location.

The computer was down when I went in to pick up my reserved rental. After being put off for 45 minutes, I called the reservation line and they talked the worker through the rental over the phone- including a reduced rate for my trouble. I returned the truck early with no damage, following all the guidelines I was given. It ended up all being a lie as a was charged 3 times the amount I was quoted. I made a complaint to UHaul when I received an invoice with this high charge, and after an initial response, they are now ignoring my messages.

Well the fuel was suppose to be at 3/8 but when I'm sitting there driving away, it shows below 3/8 of a tank. So by then I just keep going instead of having to return. Fuel is a hassle to get perfect the way you guys want it.

This location was dark and not lit at all when dropping of the truck. The people are friendly , but not organized and had no answers for questions I had when dealing with them over the phone. I learned a very expensive lesson to not leave the keys in the truck even if it was to dark to see the orange drop box out in front of the very dark store that looked very unsafe to get out and walk and look for. Unfortunately I will not be renting from this U-Haul store ever again.

The guys there were super nice! Thank you!!!

When I got to the location, I asked to rent a U-Haul and they said they went out so I needed to wait 30 min. While I was waiting I reserved it online for a certain time and when I went I didn't get the U-Haul until 20 minutes after the time I had put. At when night packing and unloading the U-Haul we tried to use the light inside the U-Haul but it did not work leaving us unable to see

Better customer service in the corporate office would be nice and not mean or rude associates in terms of helping and explaining things with some issues or concerns.

Great customer service, they will work with you. Excellent individuals. recommended

This is the first time that we've had SECURITY concerns about an actual Uhaul rep in our 35+ years of renting with Uhaul for truck, trailers and equipment. We had a reservation for a one-way rental, yet upon arrival to pickup the truck and equipment the agent refused to take the reservation number and began entering a new reservation. Not only was he wasting our time, when we told him we already have one he claimed he "wasn't setting up a new one" like we were stupid or something. (?) Then instead of OUR drop-off location he tried to get us to instead select from a list with drop-off locations that were in cities we've never heard of like Escondido, near the Mexico border. When we told him we are dropping off at Ora Grande in the high desert, which was not on the list he was insisting we select from, he told us to "not worry about what he puts on the reservation because we can drop it off ANYWHERE we want when we decide to return it as long as it's a Uhaul location." He said with a smile in a deceptively helpful manner as though it was for OUR convenience. (???!!!) We informed him that that's NOT true and called customer service. She asked why he was making another reservation and he lied to her in our presence and said he wasn't trying to make a new reservation and then got mad at us and told the rep that he is going to refuse renting to us! We advised we'd report him, he had another agent continued with the reservation but he had changed the number of blankets from 12 to 60 without our permission or knowledge. We had the agent remove 48. After we left and thought about what occurred it appeared to us that the Uhaul agent was attempting to get us to: Rent a Uhaul truck with drop-off at an unknown location, but scheduled for drop-off near the Mexico border with 60 blankets!!!!!!!! All we could think of was a terrorists putting a tracker on the truck and later using it to kidnap and or kill people. What excuse would WE have had for renting 60 blankets and dropping off at an unapproved location, yet contracting to Drop-off near the border where we have no connections? It would have looked very suspicious had our truck gone missing. Uhaul needs better vetting, and training of its authorized locations and agents.

Nothing. I was helped to hook up the trailer and the agent was polite.

A cleaner facility would be nice but the closeness to me was nice. Maybe open earlier on sundays but the drop off experience was very easy.

My reservation was for 10:30 and the shop wasn't even open. The shop itself if dirty with cobwebs everywhere. The gentleman that helped me when he finally showed up was very nice.

they were late and the location was a nightmare. 5 groups were waiting before they arrived. I would not have wanted to be waiting there alone for sure.

I didn't pick up from this location? I picked up at Marquis Auto Sales.

No issues with the drop off location. Their responsibilities are minimal.

Fun drop off point.. I needed a bed, and I think I may have found one at the drop off location, a furniture store..Very nice man and very convenient location.

This location was not very friendly or helpful.