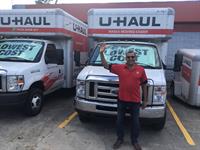 I am a woman and did not like going to a location were I could not find the drop box and the attendant did not speak good English.

Not much other then the fact that U-Haul needs to give more details about the drop off location other then just the address. Drove around for an hour trying to find a place to drop off because the first one sent to me was no longer there or was not advertised clearly as a drop off point. It was in a very crowded strip mall with no room for me to leave the truck there. The location I finally dropped off at was very clear and the person who helped me was quite helpful and very friendly

Make sure equipment is up to date and functioning properly. Try to give more warning or at least some kind of compensation it location is changed out of the way.

Communication was a huge problem. Truck stopped working. No answer at 800 number. Recording said my phone battery would run out on hold so go to website. 2 hours later still no assistance but truck started working. Still charged full price because retailer â€œwas not part of u-haulâ€

Here is another location, where the staff friendly and very helpful. Very clean and safe location.

Connected to a gas station and the owner was the only one able to help get the Uhaul hooked up. Not as customer focused as other Uhauls that I have used in the past.

Mr. Moti was a great help. Gave me lots of key advice for the road trip on a 26' truck.

Mirror Lake Texaco was great and 5 minutes from my home address. However first location I was scheduled to on Greens Road Houston Texas at a church was not great. We arrived at 11:15 AM, and Uhaul rep was not there. We had to call 800 number and get moved to the Mirror Lake location as alternate. This added an hour to our pickup process.

The trailer had not been cleaned and there was a lock from a previous customer on the door. The rental operator was Extremely helpful in removing the lock and assisting me.

The man who helped us pick up and connect a trailer was very kind and professional. He made the process of check in easy and fast.

The price was higher

Clerk was helpful and fast, I was there in and out, good experience, I'll be renting there next time.

Location at a convenience store. Only one person working the counter and handling U-Haul rentals. I had to wait for attendant/cashier to attend to customers. Very limited choice of trailers to choose from. I actually needed a bigger trailer, but i didn't want to mess driving around town looking for one. I don't recommend this place for pick up.

They told me I was clear to go and didn't owe anything else and then a charge of almost $30.00 was charged to my card. I returned the truck clean and swept out, I was never told I would be charged anything extra. I very disappointed with these companies representing u-haul.

The young man who checked me out When I returned the truck was very friendly and I enjoyed his bubbly personality.

Moti was the best. It truly is a neighborhood store. I will be using them again.

Did not have instructions on adjusting mirrors

The owner was outstanding and we would highly recommend this location to anyone. We will rent from this location again. I know he will verify the equipment is in great condition. All these issues that we had on this trip, we provided this owner with details.

This was the worst experience ever!!! I would give zero stars . I ordered a auto trans port and 15 foot trailer. I arrived a the designated u haul location that's been set up for weeks. I waited in line we proceeded with my check out, asked them to please place my car on the auto trailer and hook to u haul . They told me no problem. We proceeded to find out they switched my location for pick up with out notifying me. I then had to drive to the next location which was a Texaco . They had 1 u haul and the auto transport . I went in side , to check out and asked them to hook up everything. They told me they can't do that !!!!! I asked why in the hell would they change location pick up if you don't know how to do it and I made the request during my reservation? I was so upset. I asked them to call another location to get someone over to do it, they wouldn't do that , they tried calling their boss , who wouldn't answer. The damn phone . I was by myself and I didn't know how to do it. I had movers coming in 30 mins , which you pay by the hour. I was asking each man that walked into the Texaco if he knew how to put my car up on an auto transport. I was getting no , no , no then finally One extremely nice man says he would do it for me. I asked if they could give me the keys, so he could do that and leave . They would not allow it until I had paid . They ended up having trouble check me out Because of their machine went down . An hour and half later they overcharge me from the quote, but by this time I didn't care. ( yes, the nice man waited to help me still) when we finally got the keys to hook up everything.. THE U HAUL WAS ON EMPTY . Yes, Empty . I was furious. Now I put $60 in gas / paid the gentle money who helped me and had to pay my movers an extra $100 for waiting in my parking lot because I wasn't there in time. With all my phone call complaint and the hell and stress they put me through , they only gave me a $20 credit . Then to top it off they charged my debit card an extra day when my return time was 5 pm and I returned it at 3:44pm . They said they was a clerical error. WATCH YOUR BILLING !!!!!!!!! The WORST EXPERIENCE EVER ABD IT COST ME SOOO MUCH MORE MONEY !! Hell no I would never recommend the Texaco location as a pick up NEVER