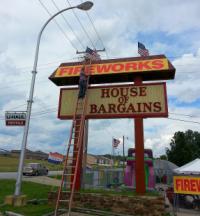 The point of contact (Alan) knew his business. He went and retrieved the 5x8 trailer, hook it up and performed safety check. I did request the reservation be changed from 4 day to 7 day, but was told,"It would be alright. They are more concerned about destination and if it exceeds the usual 7 day rental on one ways." Overall, a very good experience and would rent again from him.

There was a small amount of trash in the trailer and it smelled a little but other than that it was as expected. Staff was friendly and informative. He even attached the trailer to my vehicle for me.

Staff was helpful assisting with loading our car onto the auto trailer. They did not have the dolly we had on our order and the truck had not been cleaned. It was dirty in the cab and loading area. But it got the job done.

This is an excellent agent and at a great location.

There is only one person there and we had to wait on him because he was loading a truck and couldn't here the page.

I was not there to drop truck off so i cant comment on this location.

The customer service representative was absolutely fantastic! I could not have asked for better help, assistance and kindness, which was really needed this particular day. He is invaluable!

Allen was a top notch customer service agent. He made sure that I had everything that I needed and offered tips on how to make the move run more smoothly. Would HIGHLY recommend!

Nothing it was perfect from start to finish thank you all

The people were nice but not as friendly or helpful as the 1st location. They seemed a little confused on how to check in the truck..they started with telling me I was cutting it close on the time when in reality I didn't even have to turn the truck in until the next day. Maybe because they were not a uhaul but rather a "house of bargains" they weren't as friendly or knowledgeable.

As always, these guys can't be beat. Very quick, in and out.

This rental with Uhaul was by far the best I have had to date. The guys there at HOB Rent It Center where so helpful and worked quickly to take care of my last minute need for a truck. It was very quick, I was in and out like I had a reservation. The truck was almost band new and ran great and was clean. When I dropped the truck off I didn't even need to be there. Which was nice after a long day of work the last thing I wanted to do was wait to check the truck in. I will never use any other Uhaul place, HOB has it going on and I will tell anyone that needs a truck to go there. Thank you HOB.

Nothing. I caught the attendant at the end of the day. He stayed on duty to receive two returns and make my reservation for the next morning. He was nice.

There was a little bit of food under the seats from the previous driver as well as some trash. Not enough to say not clean but when I got my stuff out, I noticed.

Everything and the rental person was great

Broken glass all over the inside of unit

Nothing The individual I dealt with was pleasant and very helpful

Representative Just told me to drop the trailer and my receipt would be emailed. I asked About the charges and his answer was simply â€œsupply and demandâ€. Uhaul should standardize their daily one way pricing.

Great service and a very good option for moving/storing "stuff". Keep up the good work... Thanks, Jimmy

Fix the step by the register so no more people fall

I rented a â€˜one way' truck from the STL area to Jefferson City, MO. I have a U-Haul location less than a mile from my house. U-Haul, however, wanted me to return the truck to a location 9.8 miles from my house. They sent me a text with the address that when I â€˜tapped' on the address, it took me to my maps program and gave directions. However, the directions it gave was to a wooded area 8 miles in the opposite direction of the drop off location. This caused me to go over the miles â€˜allowance' I was given and cost me additional money for my truck. ... by returning the truck nearly 10 miles from my home (and not the location less than a mile from my house) I had to find a ride back home. (A friend â€˜disrupted' his evening and picked me up rather than me paying $20+ for an Uber when I had hoped to walk from the location close to my house). ... I had contacted U-Haul on more than one occasion asking to change my drop off location and they continued to advise they preferred the â€˜assigned' location. MY ADVICE, work out the most convenient drop off location for you when you initially agree to rent a vehicle from U-Haul.

They were very helpful there...the problem I had was with my ubox res... I was told when I set up I box that it would only be around 160 to deliver to my new home.. Then told me it would be 1400

Allen was great. Really went the extra mile hooking up our car and explaining things...excellent employee.

It was a holiday they were closed, Had to disconnect myself. Parking was on an incline. My wife had to stand on hitch to keep it from rolling away, while I went to find rocks to scotch the wheels.

Door to business locked and could not enter to close out the contract even though it was still business hours. Dropped key to your box outside around 5 pm. Hobbs did not check it in until next morning but charged two late days. Hopefully call to National will fix this.

I initially called this location for an auto transport at 5:20PM. He had what we needed, but said we needed to be there by 5:30 so he would have time to complete the paperwork before they closed at 6:00. We couldn't get there until 5:35, so he recommended we call a different location that was open until 7:00. We did that, but they didn't have the trailer we needed; the woman on the phone said she could reserve the trailer at the other location as long as we could get there by 5:45. We made the reservation and arrived at the initial location by 5:45. The door was already locked, but we were let in. When we mentioned we were there for the trailer, he realized we were the ones that called earlier. He then became very rude, and said that we had to be there by 5:30 to get all the paperwork done, and was complaining about how he'd been there for 3-4 days in a row and he was very tired. He did process all the paperwork by 6:00 (closing time) and a different associate helped us hook up the trailer. We got the impression the associate that processed the paperwork wanted to leave early, but because of us, he had to stay until closIng time. He even made a comment how the other employee had more energy because he hadn't been there as long. The associate who helped hook up the trailer was very nice and courteous. We will never use this location again because of the rude service we had. If he had told me to just come by when I first called, we would have been done sooner.

Be more up front regarding what adjustments to your bill means. Make sure the customer understands what if you drop off the truck at a different location, make sure you have no changes in helpers! Also bring back to where you rent it because of if you're not sure of the location, you're could be returning to a hole in the wall!!

I am always greeted politely and professionally. The service they provide has always been prompt and accurate. I am always reminded of any specials or savings available at the time, also about the additional services and products provided.....I always feel welcomed!

Front drivers seat was broken and leaning really bad to he left. Felt like I was falling into the door the whole time I was driving. Cab area was really dirty.

All was great, no improvements needed.

The cost was higher than US Rents It and I felt like I was belittled why speaking with the manager.

We had a storm the night before returning Uhaul. We had to have someone come with a chainsaw to remove tree that fell at the end of the driveway before we could return the truck. I was stuck paying $75 for an additional day when we were a little less than two hours late of return time. I asked since I was paying for an entire 24 hours could I just have the truck back. It appeared to be a hassle and the agency said they were having difficulties trying to rent the truck to me again. Are you kidding me? He didn't have any difficulty charging me for the entire extra day. Will NEVER go back the Uhaul. We have used several times, but this was our last. Sadly poor customer service from start to finish!

This is not about the store but about your reservation center. If someone reserves a 26 ft truck, there is a reason!!! I had to make 3 trips to move!! It took 3 times as long and because of this, my daughter's birthday was not a very happy one because we had to finish moving on her birthday. U-haul needs to address this, had I hired people to help me move, I would have been highly upset and sending U-haul a bill for it!!

I could not open the attachment for my receipt. Please sens me my receipt.

Truck cab had very strong smell of cigarette smoke. I'm a non-smoker and found the smell very unpleasant. It was difficult to rid the cab of the smell.