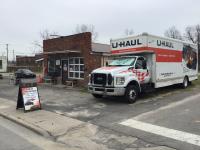 Have the location be somewhere cleaner, less run-down looking, and more out in the open. If I didn't know this place was where I was picking up the truck, I would never stop here. For the reputation of U-Haul, I would highly recommend having your trucks be moved somewhere else. This part of town is pretty sketchy, and off the beaten path.

This location is a barely functioning business. Attempts to contact the location to confirm before pickup were impossible as the voicemailbox was full. The link on the UHaul website said the location was closed, so I tried to have my reservation switched to another UHaul store, at Knox-Abbott in West Columbia, SC, where I had made my original reservation. I was told by a staff member at the Knox-Abbott store that I had equipment reserved at an alternate location, but when I arrived to pick it up, the equipment was not available. I was then told I needed to drive across town to another location, but I was given the wrong address, and by the time I discovered the address of the correct second alternate location, the store was closed. I was then given directions on how to use your app to pick up the equipment at the original CLOSED location, but once I arrived at the location, your app provided no information on how to access the keys. There was an individual in a shack at the location drinking and smoking; he told me he didn't work for UHaul but the manager has given him the combination to the lock so I could unlock the truck and retrieve the keys. There was no contract, no check of the equipment or my ID or drivers license, no computer or other office equipment in the shack. I was given the keys and I left with the truck. Later that evening the regional manager Kevin called me and after I told him the story, he told me he would email me a contract. This rental location was SCARY and should not carry the UHaul brand. The truck was fine but this was the WORST UHaul rental experience I have ever had.