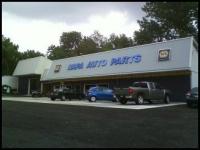 We had to clean the truck. In this age of COVID, that's unacceptable. There were no instructions regarding ez pass. We rented it for one day. We picked it up 8:30am and returned it at 8:30pm. We were charged for FOUR DAYS. We wanted to support a local business. I won't go back.

always make sure the equipment is top. Thank you!

U-Haul representatives need to be trained on new procedures, like uploading pictures of rental equipment.

The truck was dirty inside. The cup holders were all dirt/mud

Great experience. Made reservation online and it was an easy process and literally was in and out in less than 5 minutes. The manager was very nice, friendly and helpful.

Upon drop off with the Mobile check in i was unable to enter because it said i was incorrect with miles.

Great experience. Easy in and out. Vehicle was ideal for my use, and it was very clean and ran great as well. Jason Greco was really nice to deal with as well.

Jason was great to work with

Kason does a great job. I rent almost every weekend in the fall and could not do it without him.

Uhaul was double booked at another location I was supposed to pick it up at. They sent me to this location. Uhaul was literally just returned and had spills in the cup holder and smelled terribly of smoke the entire 2 days I drive in it( I don't smoke). Was disgusting. The manger offered to clean it but I was already delayed because if having to drive out there to get it. Definitely did not get compensated enough for this inconvenience nor with the condition of the uhaul.

Jason is great to work with

it was easy and very satisfactory to use this pick up location and for the return, thank you and yes I would use this location again as well as the Albany Location.

I was overcharged mileage by 50 miles. The associates must have taken it for a ride after I turned in the keys. I have filed a dispute and am waiting for the results. I would not recommend this U haul facility or U haul in general at this point. Rip off.

I've known these guys for years they are a great bunch ! Thank you Jason and John for everything ~ ??????

friendly good service. I would recommend to anyone.

The guys went above and beyond to help me with my return.

The service was excellent I can't think of anything that could be done to improve.

Get your computer system in working order. I wasted an hour of a moving day trying to rent the damn truck because of your 20th century communication.

The man checking us in was great, very helpful! Highly Recommend

I was told by the Uhaul dealer in Arkansas that the car which was put on the car hauler by the Palatine Bridge, NY location was very loose. It survived the trip; just relating what I was told.

No there was also trouble it be in drive ,press the gas it wouldn't moved did that to me twice,I tried put it up in park and back to drive a couple times,finally it worked,I did tell them when I returned it,they charged me when I rented it and told me I be credited back,if I didn't go the full 50 miles which only 33 miles I went,he wrote down 10 miles more on his adding,I had to make another trip to storage it is only 33.4 miles up and back ,he was wrong,and I called after getting my CC bill and I wasn't credited,so I called he figured it up ah it's only over $ 14. But there's nothing I can do about it now,the guy that handles rental,is gone often I had to go over 3 times before I was able to catch him there,then when I returned it he wasn't there so the man there told me Uhaul would credit any miles they est.over so I waited to get my CC statement,no credit,and ah it's not that much ,I can't do anything about it.and I even brought it back with more gas,but I feel sorry for the other person rented truck behind me,knows enough to work the shifter if it ,doesn't go in drive

We were to pick up are trailer at an other location but. They said we have no reservation for an said I'am sorry an hung up. Called back an said I have a reserved number an she said I still don't have trailer for good by. I called the rental place in Johnstown I go for tools an machinery an they were very very helpful. They took my reservation number an phone number and said we don't have one here but I will find one for you. That's the kind of people you want to deal with.

I don't like the extra charges for the two extra days I had the equipment, it was unavoidable and uhaul should be somewhat lenient for people moving such a far distance. Shit happens... the gentleman at Greco was very pleasant and helpful however.

This site recommended the pick up site and drop off was easy.

did a closed drop off.

I reserved a 20' truck with a tow dolly 1 week prior to moving. In a week they couldn't find one so I was "upgraded" to a 26' with a car hauler. Mind you this was for a 1300 mile move to Florida from New York. Not only did I not need the extra room but the truck had been in an accident before our use and was never fixed. I work on car restoration and there were multiple broken parts on it including the sway bar, tie rods, ball joints and the alignment is off several degrees. Multiple times it almost went off the road when a truck passed by. I saw many other uhaul trucks of the same length flying down the road without issue. Eventually we had to find an alternate route with less tractor trailers and that cost us time and added miles to our trip. Not to mention driving over 48 mph the truck became a road hazard weaving and shaking. My husband had blisters on the palms of his hands from trying to keep it steady. Not joking. When we returned the truck we pleaded with the woman to not rent the truck out until it was serviced and she said she wouldn't. I'm hoping she was being honest so someone doesn't get hurt or killed. After the trip from hell we were then charged for overage on the miles. Although it was a mere $15 it is irritating considering that the reason we went over was to avoid death. All I can say is if I ever need another moving truck I won't be spending my money at Uhaul. Very disappointed.

It was nice to get an email that I could drop the item off at an alternate location. That kept me under 30 miles.

Found the person at the drop off location rude an impersonal.