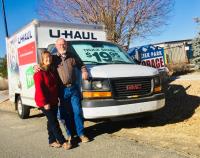 Very, very helpful staff! I truly appreciate how they took care of my reservation and some minor chafes that were needed to make the rental a very positive experience. Thank you

This location was clean, friendly and helpful. Highly recommended. Staff were outstanding!

Sherry and Rod were very helpful and professional

This was such a good experience. Everyone at Glacier is so helpful.

Add unlimited mileage for 1 day use.

I been renting from same place couple of time staffs are awesome i will definitely recommend this place.

Thank you for being so kind!

Not a thing to improve. Property is kept up and custom service is exceptional. Thank you

Excellent service. They went above and beyond to make sure I could get the equipment I needed from the location I wanted.

Super helpful crazy friendly. Was able to answer all my questions with confidence.

Your online check-in process is way too long - took over 30 minutes to get the vehicle. I supplied all information and checked in the day before and it doesn't seem like any processing happened until I arrived to the location. Why do it at all and give a false impression? Location and people at that location are great! Friendly, accommodating and knowledgeable. Kudos!

These managers were efficient and kind and seemed truly interested in helping us stay on track with our timetable. The truck was ready to go at the promised time and we were able to stay on schedule. Thanks!

Peggy at the front office was great to work with.

I very happy with my experience!

Outstanding people at this location. I go there whenever I need help because of the staff. Professional but also personal. Great combination! Sincerely, Darren Clemenhagen

They were kind and accommodating

I was looking for a 20' truck with a car dollie/auto transport in the Frederick, CO area. After spending 30 minutes on the phone with U-Haul scheduling, I was told there were no car dollies or auto transports available anywhere in northern Colorado. When Dominic from the Frederick location called to verify the rental of a 20' truck on Thursday, I told him I wasn't able to find a dollie/transport in the area. He said he'd check his other locations and get back to me. Doesn't U-Haul scheduling have the ability to check inventory as well as what's going out and what's being returned in ALL locations? Originally U-Haul scheduling wanted me to pick up a car dollie in east Aurora....which would've added 140 miles +/- (30 miles to Aurora, 10 miles to my home, 40 miles to Frederick, 30 miles back to Aurora then 30 miles back to Frederick) of unnecessary driving! Later that day Heather from the Frederick location called and told me they had an auto transport being returned Friday at 9am (why didn't U-Haul scheduling know this?) I was hoping for Thursday morning but I said I'd take it. I unexpectedly received another call from Heather a little later and she told me she found an auto transport that's available Thursday morning in Dacono (15 minutes away from the Frederick location). I was surprised and extremely happy Heather was able to find this for me! Again, why didn't U-Haul scheduling know about this? Later that evening, Heather called again with even better news....she informed me that the 20' truck AND auto transport were both at their location! I was ecstatic!! She literally saved my hide! I arrived at the Frederick U-Haul location Thursday morning around 8:30 to pick up the truck and transport. Paige informed me the truck I was supposed to take was not returned the previous night. She called the customer who told her they would not be there until 10:00. There was another 20' truck that was returned Wednesday, but the customer said there was a noise coming from the engine area. Paige jumped thru hoops to get that truck ready for me. She called the mechanic who repaired a flat tire, checked the engine and took it for a test drive. Everything checked out fine and I was on my way. The Frederick U-Haul location is by far the best U-Haul location I have ever dealt with! The person I spoke with at the U-Haul scheduling department needs a lot of training and a little bit of an attitude adjustment. Needless to say I am very disappointed with the service or lack of, I received from the scheduling department. The next time I need help with a truck and transport, it may be better to call the Frederick location as they know to do their job correctly. Mark Medina

Rude call about drop-off when they incorrectly promised the next customer when equipment would be available. Otherwise great experience.

Please drop the online check in.. Every time i do it it could never find my location! It's very irritating and on top of that it's stressful all I can think about is being charged a late fee if it was not done properly or on time. Other then that it was wonderful and amazing customer service

Thank you for working with us on the return date.

The automatic system had us take a photo of a gas tank that was 3/4 full when we started. When we returned, we filled to the same point, but we're charged $15.00 for fuel. How is that fair? We hope to get that money back. Please review the before and after photos.

I have no suggestions. The people we worked with were outstanding.

These people go the extra steps to make sure all is well.

This was a great experience. Sherry and Rod were so helpful and courteous. They made sure everything was in order. I will rent from Glacier again!!

The couple that run this facility are awesome!

We've had excellent experiences with this U-Haul location. Making the reservation for the truck was easy, the truck was in great condition, available and ready to go, and we received friendly service when picking up and dropping off the truck. This rental location is at Glacier Park Storage and that storage location has also been great for us (we have a huge unit and the price seemed to be less than most other locations)..

The trailer we rented was in good mechanical shape but the coupler that attached to my tow vehicle fit very loosely on my hitch. This resulted in a lot of "slop" between the trailer and the hitch and a lot of noise when the trailer was empty. Putting tongue weight on the trailer eliminated the noise but the old system that U-haul used for its couplers was much quieter and a much tighter fit. I suspect the looseness of the new couplers results in a lot of jerking on the tow vehicle which could then lead to transmission damage to a tow vehicle. Given modern manufacturing methods, its not that hard to machine the couplers to fit properly on the required 2 inch hitch ball. I will look for other trailer rental outlets that provide proper fitting between the coupler and my tow vehicle when I rent again.

No recommendations because my experience was excellent

Easy drop off of rental equipment.

I am not sure who's fault this is but our trailer blew out two tires at two different times, after the rental place told me they put four new tires on the trailer. It cost us 4 1/2 extra hours to add to our trip, and it was very strenuous on the animals in the car.

The centralized scheduling changed my pickup time from 8am to 1pm delaying the start of my trip by 5 hours and then, 25 min before the revised pickup time, they changed my pick up location to one further from my house.

Very disappointed with Uhaul. When I reserved almost a week in advance I was told I would be able to pick up my truck in Longmont. I arranged for my moving help based on the promise of the local pick up. They called the evening before the move saying I would have to pick up my truck 20 miles away adding to the cost by 40 miles and also costing me 4-5 hours to my move time because the only truck available within reason was a van which required an extra trip. Uhaul over promise and under delivered!

Wish there were bigger units

I made a reservation two weeks in advance to pick up a truck at a site nearby my storage unit. Two days before scheduled pickup, I was notified that the nearest available truck was 30 miles away. When I complained, the person I spoke with, instead of texting directions to the truck's location, texted me that my reservation was cancelled. The truck I drove did not shift at all efficiently. Although the people at both pickup & dropoff locations were friendly and helpful, both the vehicles and reservation system need serious improvement. I would be hesitant to use or recommend U-Haul in the future.

This place is super outstanding with fantastic service and they saved me by getting me a cargo hauler after U-Haul messed up my reservation. Again super cu-do's to Glacier Park Storage,

For trailer rental - The website should have told me that I must bring the same vehicle that will be towing the trailer, and that I cannot switch the trailer from one vehicle to another.

Your office personnel was really friendly and to the point it was a hassle free experience and l lappreciated How smooth the move went .

All went smoothly, and the staff were friendly and helpful.

You accused me of dumping trash. I didn't and don't even know where your dumpsters were. You stuck by this to my wife and said I was on video, then backtracked when she asked for it. I am offended.

The process of leasing and moving into the storage unit went very smoothly.

It is clean, easy accessible and the people there are so nice to work with. It was fast to get checked in and get access to the unit to be able to move into.

We received wonderful service at Glacier Park Storage. They were friendly and helped us select the right unit for our storage needs. It was easy to make a reservation online.

The staff is great and easy to speak with. The facility was clean and well maintained .

I have had the storage unit almost 2 years and when I had a question or needed something, the staff was always professional and helpful. Very nice.

Brenda helped me out personal ally several times and it made for a great experience!

They are great! Ive used them twice!

This was a great little storage for me. The location was very accessible, right off HWY 52 & I-25. The place was always clean and well maintained. The staff was friendly and helpful.

Sherry Beneda and Rod Baldwin were very accommodating in meeting my needs during my relocation.