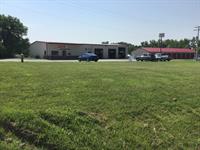 You might sweep out the truck before renting it out and TRIPLE CHECK THE MILEAGE ON THE ODOMETER.

Couple mechanical issues with my moving van and vehicle transporter. No fault of the owners of Gaps service in Boonville Mo. The van needs the tires to be balanced. The ride was bumpy for the entire duration of my trip. Not due to road conditions. The vehicle transporter trailer has a bad wheel bearing or brake issue. When dropping the equipment off, I could feel the heat radiating off one wheel on the passenger side. Extremely hot.

Because the location wasn't open, we had extreme difficulties. When I had called ahead of time, the person I spoke with didn't give me much information on how it would work when we picked it up since the store wasn't going to be open, and even made it sound doubtful that I would get a truck. Then when we got there, I was having issues checking in online, so I called to get assistance and was on hold for over 20 minutes. After being transferred a second time, I was either hung up on or the phone call got disconnected somehowâ€”trying to give them the benefit of the doubt hereâ€”and I had to start the process all over again. While I was trying to reach someone by calling back, one of the people that was with me was attempting to chat with someone online, and yet another person attempted to call the location I would be dropping off at that would be open. We didn't get assistance from any of these for a good long while, and had multiple issues with uploading the drivers license of the driver. This was all happening while it was pouring down rain! Then when we were finally able to get what we needed to get the key from the truck, the lock was put on incorrectly and it took us a while to loosen it enough to get it off. The entire process took over an hour, and should have taken less than five minutes. Very dissatisfied with my experience on this end of it, and highly recommend you have a location that's open on Saturday so that people can speak with someone who is present. Moving on Saturday's is common, so I think it should be expected to have someone there, even if just by appointment.

Very nice person to help me turn this back in.

I had to rent a UHaul quickly and when I reserved on-line the facility I was reserved with was closed. Abby, at Gaps stayed and waited for me to come and pick up the UHaul and was very, very kind. She went thru everything with me, even realizing I was not having the best of days. This morning she called to see if everything went well, and to assure me that things were god on their end. I can't tell you how much I appreciate her!

Need better training on the system. And I was told I would get my deposit back when I dropped the truck. Wrong

Had computer problem but stayed positive and worked thru the issue and was able to rent the trailer to me!

Nothing, I can think of. It was very easy to load in and traveled great!!

I requested a larger trailer and was told in stock at location and when I arrived they didn't have the item I requested and had sub a smaller trailer which needed up costing me an extra day and they was charged for 3 days. I am totally unhappy with this.

The customer service at gaps was amazing. I travel 2 and 1/2 hours to move my mother and the guys at Gaps actually went and picked up the truck for me in Columbia, which was where Uhaul had set up as the preferred location. This made the move go quicker and smoother for me. They definitely went the extra mile and I would definitely recommend them!

Truck was clean, but running condition terrible. Tires WAY out of balance & front end seemed really loose. Tires bounced so bad that 60 MPH was about top speed. Air Conditioning just barely worked. This was only a 35 mile trip & back, so I struggled thru it, but I wouldn't recommend to go on long trips........

Our experience with The Uhaul family was a very positive one. We would recommend them to anyone!