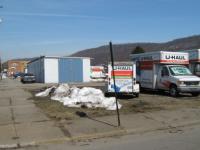 We used the internet this time and we will NEVER use it again. The gps system does not work. I had trouble picking up and even more trouble dropping off. We had to have an agent help get me going but when we dropped off there was no agents available till the next day and we were charged for a whole second day. We were told we would get a refund but out of the $180 charged we only received $35 back. NEVER again!

I did not get my furniture dolly but paid for it the truck wasn't real clean when I picked it up. I reported on my phone at the end it wasn't clean and had to pay for the previous users mess.

EXCELLENT A-1 service. Staff was friendly & knowledgeable. Would highly recommend this location

the check in with your phone does not work properly, we had to do it over and over again finally the clerk had to do it. When returning the truck it states you have to go to a link and fill out a few questions and take pictures we tried numerous times and it did not work, it kept saying we did not have a rental agreement which we did. now because i had to just leave it there, i am getting charged another 20.00 for the company to check it back in. make sure your programs work before executing them this is not right that i am charged for your app not working properly.

They were so nice and so helpful. It was so nice because moving is so stressful.

Location was fine. I have issue with the online check in - took over an hour. At one point, the rep asked for my passport...no one carries around their passport.

On 2 occasions I rented a truck from this location and I was very disappointed. I was charged on both occasions extra fees for gas and cleaning. My experience with this sight is they are in the practice of over charging customers. I will never rent a truck again from uhaul

Steve & the other employee that help us were absolutely great. Friendly & went out of their way to assist us with the vehicle & transport and instructions while loading our vehicle, Just Great!!!

The truck has 117,000 miles on it. The brakes hardly worked and empty we could barely get it above 35 mph which cost me another hour of labor at $99 an hour from the movers. The truck should be taken out of service IMMEDIATELY and repaired!!

Only problem was they had to find the keys

Air condition did not work in truck. Very hot day

Since Uhaul is not willing to look into this, I might as well post a review. I had the worse experience with my uhaul that I have ever had. First, I was never asked if it was a one way trip, or â€œlocalâ€ trip. I had to pick up the uhaul about 20 miles north of the house I was moving out of (not their fault it was just the only place that had the size I needed ). However I was then moving about an hour away from the house. I thought I could drop the uhaul off near my new residence but was then told I had to drive it all the way back to the location I got it from. I called uhaul to see why and they told me that it was considered a local trip, vs a one way. I was never informed of this. I had to add more mileage to then get it back, which meant more gas I had to use and then Refill. The dolly I also rented was the worse piece of equipment ever. The tires were so worn down that it just kept slipping everywhere. While the price of the dolly wasn't that much, we couldn't even use it. I also noticed that the mileage they billed me for, is definitely not the mileage I used. I calculated the exact route I took and it was off by over ten miles. While some people might not worry about 10 dollars, it then costed me $200 total for the uhaul plus the gas. Once I called uhaul again, the lady just gave me an attitude and told me that there was nothing they were going to do, because that's just how it works. My friend moved to another state completely and spent the same price that I did to go an hour away.

price was higher than I expected. kept rental less than 24 hrs and only drove it 17 miles and put 1.6 gallons of gas in it before I dropped it off and my total was over $50.00. And man that checked me in was upset where I parked it. I told him the man in the morning only instructed me where to park my car and said nothing as to where the truck was to be parked. So I parked it exactly where I picked it up. He was not a happy camper!

Better customer service. Cleaner business to rent out of.

I went to the Moving Help site to hire 2 guys to load and unload I received a txt @11:30 that they would not be coming. We ended up doing it ourselves. They took money from my account and I expect a full refund. I am unable to get ahold of anyone. Uhaul assoicates themselves with Moving Help I expect someone to help me get my money back as there were no services rendered. Your immediate repsponse to this matter is appreciated Vicki Hawthorne

Customer service was a bit slow, but everyone was polite and accomodating. I would both recommend this location to a friend, and return in the future, if I need another rental.

Very helpful with my drop off.

Very fast service ... was in-and-out in just a few minutes

Chippewa pa location. They screwed up on Monday by not having my email address on order. Called to tell them I had dropped off trailer, they were confused about the return.

I logged everything on line and answered the same questions when I got there. What is the purpose going on line?? Vehicle was clean and ready on time.

Also quick, efficient and friendly service. I have used this facility in the past and will look to it in the future.

Make sure the correct rate is entered before processing charge card. Because the agent inadvertently entered the incorrect rate I was initially overcharged for my rental and did not receive a refund of the difference until my rental was returned.

Better customer service. First my order couldn't be found, second they had no locks for a truck and the man that helped us acted as though he didn't want to be there.

I went there in person to set up the reservation. When I got there the day I set it up for they didn't have it. I was not the only person that had this problem. Then he did find it but they had it for the wrong day. He gave me much attitude and was saying it was my fault. They didn't have the truck size I needed and only had a small one. It was very unprofessional and I would never use this company again.

As with my pick up they were busy but I was taken care of in a timely manner and I was quickly on my way.

Very nice to work with.

Too many charges that were unexpected. Made me overdrawn 2x so an extra 70 dollars on top of the extra charges. Such total BULLSHIT!!!!!

Very friendly and helpful, truck was in good shape and ready to go.