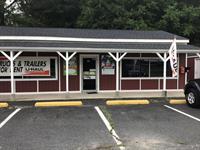 If you are on the Eastern Shore of Maryland or Virginia, this is the place to go! Wade always meets our needs and if he doesn't have what you need, he gets it!!!

Wade Roghton was excellent! Very helpful, answered all my questions and concerns. Helped to make the entire process easy.

Overall experience sucked. I made reservations on a Tues for a Sat pick up. Then I get email saying my location was changed to 20mins away from original. Luckily I called that location day 2 days before sched. pick up bc when I did I was told that he didn't have the truck I reserved nor did he have enough trucks for reservations. Super rude guy! Pickup was pushed an hour bk. So we were 20mins late returning & was charged full day!!! Should have charged partial not a whole freaking day especially after ALLL the issues I had to begin with. Horrible experience!

This was my first time renting from this location and after many U-Haul rentals over the years, this was by far the best place I've rented from. The staff there was extremely friendly and easy to work with, the location was very easy to get into and out of and the truck was in perfect shape!

Very helpful and friendly Knowledgeable about the area

Discount Cigarette was extremely friendly and helpful. I will be using their services again and definitely will recommend to anyone I know.

Too much rust on the trailer!

The drop off was very easy to find and we had no problems locating the lock box.

I appreciated that the person who helped me wore a face mask while talking with me.

You can't improve on perfect! Have used this location 4-5 times in the past few months and it has always been flawless. Thank you Wade!

You can't do anything to improve my next visit! How do you improve on perfect?

Nothing to improve. Each step in the process was well-explained and the equipment was in fine shape.

You can't improve on perfect! This is our second rental from this location and are treated like family! Thank you Wade. We have two more trips to make and will see you soon!

Very easy drop off and the man vas very sweet !

This location emailed me the receipt. Uhaul was having problems with computer system and I could not open the receipt. I am now having problems printing it, but that is probably not a Uhaul issue. Gentleman at check n was nice, but did not review the truck while we were there.

Allow prepaid cards we had to go back three times because you guys do not accept prepaid cards. We ended up having to call on a family member to help us out.

Can't think of anything .very happy with service I reseaved. Going back to same location to rent larger trailer for move to Florida.

would like to hear back from you. great trailer for inside for storage. need to modify front of trailers with air flow deflector . my gas mileage went from 18 miles per gal to 12. to much air hitting flat surface.

The Uhaul personnel were very helpful and courteous.

Nothing to improve on, excellent equipment and service by friendly professional staff. Very clean . Ent above and beyond !!!!

Wade was very misleading other than that the experience was good

Everything is fine. I came in at night and checked myself in. Nice location. Video for accuracy, security. Well lit. Tidy and clean. To improve, let people know to turn in directly from EITHER side of 13. GPS directs an impossible (for big trucks and long rigs) u-turn about half a mile away.

The guy was so helpful with all Situations. Very nice . I got the job done.

Wade was very helpful. He made the whole process easy. Thanks Wade!

Nothing. Efficiently operated and great customer service. Thank you. Will recommend.

The owner at this location was friendly, courteous and very helpful. He took the time to show us how to hook up the trailer for the best hauling experience. (He actually got down on his knees to show us). He explained everything and was happy to let us pick up the trailer a day early. We will go to him again.

The gentleman was nice and helpfull.

Everything was perfect! Friendly and helpful!

The gentleman was polite courteous and overall a pleasure to work with.. keep up the great job!

This Mr UHaul was amazingly helpful, kind, considerate and I adore him. Would recommend him to everyone, he's a 10. Forget his name, but you can figure that one out, right. Ty's. Dee

It's a house and you park in the front yard. Lots of mud, small cramped area. Guy was friendly though and it was convenient.

Gentleman was very nice. Came out right away.. Will definitely use again. UHaul has updated their fleet and the trucks are low mileage and newer that when I rented years ago.. Definitely an improvement in vehicles provided.

Blink an you may miss this location. It was at the proprietor's home. He was a very nice gentleman. I got there after his office closed but he came out with a smile on his face. It was a pleasure to meet him.

I was very pleased with how easy and quick getting the rental was.

The rep was great

This rental 4x8 trailer cost $508 more than half of what I paid 6 months earlier for a 5x8 trailer for the same trip. definitely price gougeing. I will go elsewhere for my next rental.

Nothing at this time.

Only problem was the trailer brakes failed and sprayed brake fluid all over my car.

The Shrimp Shack employees were excellent! They corrected what U-Haul web-site had wrong, I ordered a 15ft truck to be picked up at a location in Princess Anne MD. No, we had to drive to Temperanceville VA & were to pick up a 25ft truck with dollie. Shrimp Shack employee did allow an additional 60 miles. But this website SUCKS!

Representative is extremely helpful, knowledgeable and made the rental an easy process.

Awesome customer service. The proprietor was great. I have a uhaul a few miles closer to where I live, but I will always go to the shrimp shack

Owner was VERY helpful in getting me out of a bind created by U-Haul scheduling.