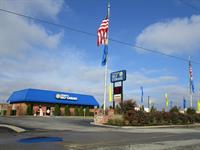 You were great! A friend has already rented from you on my recommendation!

Have an agent answer the 24/7 number because you call and what ever option you choose no one answer the phone.

All was good everything went as planned and as expected.

I first scheduled a pick-up for a 10' truck at another location in Smyrna. It was not there, so they sent me to this location. They said they only had 17' trucks, even though there was clearly some 10' on the lot. I took the 17', which was a disgrace. The cab was soaked with water to the point that the interior door grab had a half inch of water in it. I checked the back, and it had at least a quarter inch of water on the floor. I asked for another truck and he said they were all taken... there were five other trucks on the lot. He handed me a couple of bags of furniture pads to line the floor with, and told me to bring them back folded and put back into the bags. I expressed how upset I was, but he could care less. Pretty much take it or leave it. He also said that the gas tank was at half full, and if I brought it back even "a hair less than half", then I would get charged $5 per gallon for a full tank! Is this even the policy??? I needed the truck that afternoon - this was a four hour rental - to help my son move into his apartment since I was only there for the day having driven in from NC. I didn't have much of a choice so I put up with the nonsense. The person was lazy, rude, and didn't even bother to put on his mask even through it was sitting on his desk. In the past U-Haul was my go-to, but based on this I will NEVER rent from you guys again. I suggest that other customers do the same.

Transaction was super smooth. People at compass storage were professional in all I needed. Definitely recommend.

Thank you. You helped make our move from Illinois to Tennessee an easy one. Blessings!ðŸ˜ƒðŸ‘

I have always used Compass to rent vehicles because of the exceptional / professional service I receive. I will continue to do so in the future as-long-as they have vehicles. Note: Would it be possible for them to get Pick-up Trucks back in their rental fleet?

I was very happy with the service

The lady was very very professional dealing with me

Very smooth Transaction and getting my car relocated in great time and an ease of a nice car trailer, thanks again, will be sure a be back.Thank Les Perryman.

Staff was friendly and helpful.ðŸ˜

Please be sure to clean and sanitize all your vehicles because of Covid. You should not expect your customers to do this or be charged when they receive a dirty vehicle. Check and change wiper blades. Do maintenance on each vehicle to be sure they are safe. Please give customers a full tank of gas. It is unreasonable to expect them to not have that and then be expected to fill it up for you at the end. That just made me madder than a hornet!

This was not our original pickup location. We reserved a 20' truck and car transport at a location closer to our house. It wasn't until after we got to that location that they told us that there was no equipment for us. We them had to pick up the truck at Compass and the car transport in Nashville. For something that was supposed to provide us with some degree of convenience, turned out to not be, and added another level to an already stressful situation. In essence, you guys have been in business long enough that these types of trafficking issues and logistics should be better. I was very disappointed on this rental for this inconvenience.

I did find the mobile app a little bit frustrating bit once the office opened everything went smoothly. I would certainly recommend this location.

Literally (they can check the parking lot cameras) took me 52 minutes to actually PICK the truck up. The website is BEYOND horrible. And checking it BACK IN??!!! Oh, do NOT get me started. Long story short, they charged me $170.00 that clearly says, "Only $29.00/day!" Couldn't upload pictures of the mileage OR fuel gauge, NOTHING !!! REDICULOUS check-in process!!

Dropped off after hours

Truck was fine. Last minute was told no 20 foot truck available switched me to a 15 foot. That caused an additional trip. Costing another $50. They should have compensated me for not having the truck I reserved. I will not be using them again.

Expect to me charged more than you anticipate without prior authorization. I was two weeks behind on my payment and told I would not be allowed to access my unit without paying $150. After paying, I rented a Uhaul to move my things out The truck was 19.99 a day, I payed $67. I had it exactly one day. It was suppose to be cheaper but dude adjusted the amounted and overrated my account right in front of me and without my authorization to do so. Now I'm looking at a 35 overdraft fee. Way to kick people when they are down. Uhaul is suppose to help when life hits us hardest. This is the second experience I've had that ended terribly. I wont be using them in the future and I will be sure to tell everyone I know to avoid this location.

Make sure vehicles has been clean especially during this time. I'm shocked you would give a customer a vehicle in that condition.

Not the location fault but,please see my email to Uhaul... Please reimburse me for the Furniture dolly, did not use nore did I receive one I only had a regular dolly. Also beeing charged $10 to use a blanket ( yes one blanket) is ridiculous no one told me about it ,it was already in the truck and I assumed it was a courtesy of U-Haul. On top of it I would like to make you aware that I had to wait 55 min to get my key with your "check in" I reserved it for 8. I followed the prompts online and was redirect for the approval process after 30 min I started a chat after 20 min I finally received a response and after 5 more minutes I finally got my code for the lockbox to get my key. I had movers waiting for me at my house that I had to pay for you an extra hourÂ  because of your "quick and easy reliable self check-out" and yes before you ask I confirmed and actually checked In the day before. I tried calling U-Haul this morning to straighten my bill out but the estimated wait time is 28 min .... And since I get charged for everything and incorrectly, I would like to be reimbursed for the extra gas that I had put in... After using U-Haul services for years I have decided that we will NEVER EVER return asÂ  customer. Thank youÂ

From the easy ordering process through the pickup and redelivery the entire process went smoothly. I definitely recommend the Nissan location for all your moving and storage needs. Linda F Hall Murfreesboro, TN

Will not be using this outlet ever again.

Fix the mobile check-in. It cost me an hour of my schedule. Be transparent with pricing. The rep extended my return time to 8pm because I lost time due to the mobile check-in. This apparently is after hours and cost me an extra service fee. I returned the truck at 5:07pm, when hours close at 4pm. I could have definitely returned the truck by 4pm, if I was aware of the after hours service fee.

Contract # 23027420 I needed help with obtaining the uhaul myself as instructions weren't super clear through the app. Not a big deal. But the attendant in the store acted like it was an annoyance to help me out. I understand it was supposed to be a contactless pick up but heck, I needed help... I rented the uhaul for 2 days. We ended up finishing earlier than expected on the second day, so we returned the uhaul earlier than scheduled... and I was charged and AFTER HOURS FEE???? For returning the uhaul EARLY? That's freakin' ridiculous! I'd really like someone to email me about how we can fix this. Thanks.

No response from employee inside...would not answer the phone or the door. Finally came out and helped a customer get some boxes and then started to go back inside and said we needed to call him once he got in? We had reserved a trailer several days prior and had completed the online check-in and just needed to pick it up. The employee was not at all helpful and we will not be using this location again.

The staff needs to be better trained on how to use the equipment. The guy that came to hook up the trailer didn't have a clue what he was doing but because of the Corona crap he wouldn't let me do it. So, as I was driving down the road I literally heard the trailer lift off the on my hitch and slam back down. I immediately pulled over and realized that the guy did not lock the coupler. I called him to tell him what happen and all he could say was I didn't know how to do it. That could have caused a major accident and severely damaged my truck. This problem needs to be fixed.

So the equipment was well maintained but also well used, at 60k miles it should not ride like it did and the steering should not have been like at 1970 farm truck

Give us candy. My experience was great. The people @ the desk were friendly, professional, and had entertaining conversation while getting me situated. I'll use them again if the need ever arises.

My issue is with the website when trying to return the truck. This happened to me the last time I did a late return. The website will not connect with my location. I followed all the prompts to allow my phone to share my location. It prevented me from being able to return the truck. Now I will be charged again simply due to connection issues. It's frustrating to attempt for a while to return and simply leave the truck and hope all goes well.

Extremely PLEASED & SATISFIED with the service that I received from Nellie & Steve!!

Great people Nellie & Steve have always been very pleasant , cheerful, & always informative on any questions i may have, i have used this storage place in the past & now my son is renting a unit for now out there i would not go anywhere else, i will always recommend this storage unit to anyone that may need one!!!

Had to find a staff member. He just took keys, didn't want to check truck or gas, even told him about back lights not working and that I had not locked it. He said that's fine. He was more interested in what must have been his main business, a auto/repair shop. Whatever happened to good old customer service.

Yes dolly wasn't in the truck. Order appliance and utility. Had to drive to Murfreesboro to pick up the dolly.

The agent was very friendly and got the trailer hooked up while showing us how it was done correctly (just in case). He explained how to handle the paperwork at drop-off and got us on our way quickly.