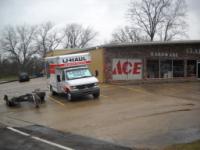 I tried renting a uhaul for two weeks and finally was able to get one an hour away and then had to go to a whole different state for the auto transport. The run around I received was ridiculous. The uhaul when picked up was muddy and disgusting. I not only had to travel hours out of my way, but also had to clean the uhaul before I could even load it. Also when dropping off I had to go 45 mins out of my way at the last minute when I was told I could go to the one by my house in FL. The overall experience was ridiculous and next time I will just take a truck and trailer myself and make multiple trips if I have to. I will NEVER rent from uhaul again.

Nothing at all the workers was very helpful but the uhaul was not clean at all .I will go back just to clean out it after each person that get it...

No improvement needed. Pickup/return was easy and staff was courteous.

The business was closed so I returned the truck via the app which was very easy to do.

Great service. Customer service at the drop off location was very helpful and pleasant. Keep up the great work!!

I was double charged.

Spent an hour trying to pick up because information was not given correctly. I was being over charged. When I went to drop off, I had to spend $35 extra on gas because I was told it was supposed to be where it was given, but I was given the wrong truck and the wrong gas/mileage. Horrible experience

The Man in Poet Gibson Ms we got truck from didn't do walk around I didn't know we had to do one an the truck was damage. So now we turn truck in an they want to charge 700 dollars. Don't do business with this man or company in Port Gibson

Rented uhaul at 12:30 pm on Saturday. Arrived ved at drop off at 12:35 pm on Monday drip off location said it was due back at 12:00 so they charged an extra 40.00 for additional day and 16.00 additional for a additional day if insurance. They told me even though I had another day being charged for that there were not additional miles allowed. So I was charged 66.00 more for 5 minutes. I have used uhaul 26 times since 1987 I will not ever use or recommend them extremely disappointed

I don't know because my experience went well.

The man was very helpful and friendly.

Nothing at all for me.

The rental software had bug and cost the dealer and me about an hour.

We had reserved a truck about a month prior to Saturday the 11th. We had to go to port Gibson about an hour from Jackson, MS. That was going to be inconvenient for pick up on Saturday but Andrea in scheduling endured my irritation and accommodated us by moving our pick up day to the Friday the 10th for pick up in Port Gibson! Worked out even better for us and for that we are so appreciative.

I had to drive an extra 91 miles to pick up my trailer on pick up day. Nobody call me to tell me until I got there.

Make reservations actual reservations and don't call the day before pick up to tell someone there is no equipment available for them. The pick up and drop off locations were fine. However, it seems that when you place a reservation for a truck, your not actually reserving something! It took hours of calls and driving to get a vehicle that I thought was all reserved. Very dissatisfied with that part of the U-Haul process and very unhappy about it. I may not use U-Haul for my future needs.

Faster service. Have all equipment that was purchased.

This location had great customer service, they were polite and helped get us on the road.

Staff was very friendly! The price was excellent!

very helpful in the renting process

The truck's tail lights did not work I didn't find out until the location was closed. I was not able to drive the truck at night. I deserve a partial refund.

The people at the location were great! I was very surprised that there was not a closer location for us. We had to drive 45 minutes to get the truck and then added to the drop off place, we were charged for extra mileage. Understandable for drop off, but for pick up from where we lived, there should have been a closer pickup....we paid for mileage from Port Gibson back to Clinton instead of mileage from Clinton to our destination. Which is not appreciated one but....I'll be telling others to check with other truck rentals first. This was never explained in the beginning!

The rental questions are entirely to intrusive. The rental process took way to long even after I reserved the trailer online.

Service was quick and simple drop off with receipts and correct information.

My biggest concern was with the customer services reps that I encounter along the way, thru the Jackson Ms, center & North Carolina center, very unprofessional in there dealing with customer service & problem solving. The phone was hung up in the middle of my conversation which made me wait to track the location down & make a personal visit. Please teach your customer service reps properly because everyone is not so kind as I.

Had a great experience with the auto hauler, even with the scanner app on the trailer so you could watch a video on loading a auto.

I happily entered "Reliable Motors" on Tuesday, May Thirteenth 2014, a u-haul dealer in Vicksburg, MS. They quickly assured me that a car dolly would be available for me to pick up on Friday, May 16th. They asked me to deliver it back to them by Monday the 19th. with no extra charges to make it convient for everyone with no extra charge!!!I was happy. When I arrived on Friday, Mat Brogden was not present. Those present had no knowledge of Mat's commitment and eventually made an attempt to help. Neighboring cities were suggested and finally I was assured after a 45 minute wait that a dolly was available 45 minutes away in a neighboring town. I drove to the neighboring town of Port Gibson. Store # 003356. I am not exaggerating in saying that, over an hour and fifteen minutes transpired before one of two car dollies was relinquished to my care and protection, with insurance. Your computer web site is either inadequate or unworkable to the affiliates!!! They were unable to negotiate the return to the Vicksburg affiliate due to the web site or their inability to negotiate thru it. Finally I was awarded a car dolly. We discussed return and that they closed on Monday at 5:30 p.m. In Vicksburg, where I live, I was told to return it Monday for no extra charge. That would make it easier for everyone. On Monday morning, the 19th, I had a car dolly that I needed to return. I hoped that I could leave it at "Reliable Motors" and work out the computer problem. After 30 minutes, I was told that I could leave it there without any protection that it would be safe to do so, till the end of day in order to take it to the neighboring town of Port Gibson. At 4:00 Monday the 19th, I return in hopes that I could leave it there and that everyone would be happy. It took 45 minutes before I was told that it would be extra charges to leave it in Vicksburg, where I live. I left Vicksburg with minutes to spare in order to make it to Port Gibson before their closing at 5:30. At 5:15 I arrived in Port Gibson. 30 minutes later, I was informed that my bill was $185.00.!!! I was told that, and signed a paper for $60.00... I expressed my total dissatisfaction in very reasonable words. One could expect that I would be outraged. I told them that my father was on his death bed! Indeed he died 8 hours later. I will never recommend U-haul! Even though I have used your firm in the past, I can never overcome the complete incompetence from beginning to end the experience that I was awarded from calling upon U-haul. I wish that a human being would contact me. Three times I tried the 800 number. Each time I was able to get an answering machine to give me options, I was delivered a "call ended" termination to my call!!!! Exactly which portion of your business work properly!!! I think NONE!!! Something is terribly wrong here!!! Is anyone listening? I await your call. Contract # 93746373

The uhaul trailer was fine, the store personnel on the other hand was not the most helpful or considerate about my time or service.