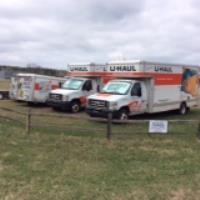 Dropped trailer off after hours. Didn't go inside or interact with anyone. Location was convenient.

Easy pick up - Samantha was very knowledgeable and helpful.

Make sure customer reps at 800 Uhaul don't promise vehicles or reservations until they check with locations. Terrible service from Uhaul. I had to drive an extra 70 miles. Thanks Uhaul!!!! ðŸ˜©

Very friendly worker. No masks worn by anyone in the building though ðŸ˜”

The person that helped me with rental and getting trailer onto vehicle was excellent. Courteous and knowledgeable. Would use again definitely

NOTHING IT WAS AWESOME!

Thanks for the electronic check-in and return.

Our truck had an exhaust leak, we didn't discover it until we were on the road headed to TN. Uhaul would give us another truck, but we would have to unload and reload; I had already paid for movers to load and was on a deadline to arrive and my new house with movers lined up there. Uhaul did nothing for me!! Very poor customer service.

the enclosed trailers should have a jack on them. I could not get the hitch off my truck, had to use a floor jack when dropping it off. Worked well for my use.

Entire staff did a great job. I would definitely use them again.

Location is fine. Equipment was not. Old, tires were not good, apparently had not been checked. Tire that was not replaced was very worn. Service provided suggested I try to swap the trailer at another U-Haul location. I was so delayed that I decided to continue with the existing trailer.

UHaul corporate needs to streamline the rental sign-up and check-in process. I think it took 20 minutes. Should take 3 at most... People behind desk spend a ton of time typing and doing things with driver's license and credit card. Streamline it, please.

Build All's staff was outstanding! They could not have been more kind. I recently relocated to Crosslake and the sudden/unexpected death of my father. Build All went above and beyond when it came to renting the trailer to me; there main focus was me , UHAUL should recognize BUILD ALL LUMBER on how to provide great service as I WOULD NOT HAVE rented anything from uHaul after the 3.5 hours of the most unclear and poorly laid out website you expect people to use. Uhaul should bring someone with to take notes on how to provide great service.

Clean the ice and snow off of the top of the uhaul truck. I was pulled over by a Minnesota state trooper because a chunk of ice flew off the uhaul roof and struck his vehicle on the highway. He then made me climb up on top of the icy truck and clean the remainder of the ice and snow. This was very dangerous and could have been prevented simply by the uhaul place cleaning off the built up ice and snow.

Check in individual was helpful as my ride was waiting and I needed to check in quickly. She took care of everything and sent an email with the check-in status. Very Helpful.

Needed help unloading. Was given name and number. Called and set up time. Unloading went smoothly. CUDOS to the young lady at Crosslake.

I had to drive 48 miles round-trip from my preferred location to pick up the vehicle- not what I had planned. The truck's condition made me question its ability to complete the trip. The truck was clean but was old and battered.

I often don't review items, because my time is valuable. but, I doing this and I'm positive it will fall on deft ears. I called the 800 number to reserve this cargo trailer, picking it up in Crosslake and dropping it off in Blaine, MN. I gave everything over the phone on the Monday or Tuesday of my reservation for the pickup in Crosslake. I was told I would get a text or email later in the week to confirm the pick up. nothing came and I called Friday afternoon to pick up the trailer on Saturday at Build All Lumber. the guys at Build all said they just had the reservation number, but no truck info or any of my info, supposedly. and they didn't have the item I wanted to pick up. its total BS and poor communication. I then called the 800 number for customer service on Sunday AM confirming the address of where I was going to drop it off. I got transferred 3 different places and no one could confirm the address in Blaine where to drop it off. it was a complete Shit-show! the chat people finally confirmed for me to drop off the trailer in Woodbury, MN WTF??!!! someone finally confirmed the drop off at a Blaine location. your customer service 800 number is weak, below average and its very obvious the left hand doesn't know what the right hand is doing. I'm embarrassed for you and I want my satisfaction now. so, the ball is in your court. I'm all ears. on the positive side, the guys at the Crosslake office and Blaine locations were very nice and polite and didn't have nice things to say about your customer service either.

Get me the right trailer when I need it and not 30 minutes from my house. Also have the wiring harness intact without any cut wires and get the scrap tires and lumber out of the back of the trailer.

Ann was very helpful and even helped hook up in the rain. great fast service.

No one at this location had ever used or been instructed in use of a car hauler. Thankfully the woman working behind the counter had a uhaul instruction pamphlet. With instructions and common sense it was easy to figure out.

Unsure if we were to notify anyone of drop off. Closed at time and left key in box provided.

Dropped off the trailer after-hours. Was not contacted by a U-Haul representative to confirm the return as the web page said I would. No big deal, but we expected confirmation.