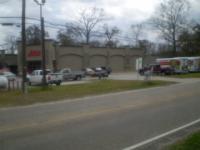 Keep more units at this location

I'm quite familiar with this business, and I'm a frequent customer. Only reason I didn't select Excellent is that it's a small location with not a lot of room.

When I picked it up the young man was a little rude but when I returned it service was a little better by Ronald.

The truck had a lot of miles on it, but was clean and ran well. The guys at ace Hardware are easy to work with.

Get better with Scheduling truck times and contacting customers if any events come up that alters reservations.

I received the uhaul with less than 1/4 tank of gas. It seems to me it would be better if tanks were started on FULL, then each customer would know if they are going to put gasoline in to get it back to FULL and not be left guessing how much gas to get in the tank to get it back to what it was when they received it. Additionally, I was very upset that a 2 wheel truck was permanently affixed to the interior of the truck, I did not want it. I already had 2 of my own. I asked for it to be removed and I was told if they removed it (even before I left) that I would be charged for its use. All it did was eat up valuable space for me to actually move. I found that extremely frustrating through the entire moving process. Frustrated enough I do not know that we will use UHaul again. I felt like there were lots of hidden fees with the usage as well. Disappointing. The facility we rented from was a good location, but everything else was a disappointment.

The cabin of the truck had a not very nice odor. Maybe spray it with a good smelling deodorizer.

At 62 mph the steering became spongy and dangerous. Replace the lower hydraulic steering unit before someone gets killed.

My first experience with the online website was very painful at the pickup (during work hours) and dropoff (after duty hours). The dropoff was EXTREMELY painful especially during night hours! In the future, I will only rent uhaul from a full-service location.

Customer service was great. Went through all steps to make sure that I was well informed and that the truck was in good condition. Please make sure to check ashtray when cleaning, there were ashes in the tray. I didn't notice until I left.

Everything was great, thanks again!

After dropping the truck the employee that helped me and checked the truck out was kinda enough to bring me a broom so I could sweep the previous renters dirt from the truck. He saved me a 25.00 clean up fee which I would have be charged for something I did not do. Thanks.

Had ordered 2 dozen blankets and they had none. Luckily I brought enough of my own and did not need them. ACE is not a â€œfull serviceâ€ UHaul dealer. No price discount for â€œpart serviceâ€. Folks are friendly and checkout was quick.

I didn't receive the extra equipment I rented. I had to go make a second trip to the location to pick up the dolly I rented, but it wasn't in stock. I was then overcharged for extras that were never included in my rental. I'm still working to be refunded 7 days later.

I wish that the employee that was helping us moved a little faster, but it's really no big deal. Josh was very friendly and explained everything in great detail! Recommending this location to everyone I know!

Not sure of the guy name but he has long hair very friendly and great customer service.it was last min for me and he really help me out

I have been renting Uhauls for many years! This is the location I will rent from every time I need one! Blaine was so professional. His attitude was contagious! He ROCKS!!!!'n

So, the app didn't work. When I got to the key code screen, the code did not appear or was incorrect and did not coincide with the locks on the key box. I had to go inside the store and request help. The key was actually never placed in the key box. So the â€œno contactâ€ pick up became a contact pick up and took more time out of my day for the use of the truck.

It was a horrible experience. I registered on line, but when I went to pick up I had to go inside and go through it all over again. Much less the hassle of having to provide all of the same information twice this is at a time we are trying to limit contact. THe vehicle was in terrible shape. Dents and scratches throughout including a broken headlamp cover. I did not appreciate the hand truck that I did not order nor needed to use locked in the vehicle taking up space to load and unload. I had ordered 12 blankets and was told they did not ave any, despite my reservation. An individual was able to locate 12. After finally leaving the facility I had to return as the check engine light was on. I then had to spend time to change to another vehicle. I was switched to a larger truck. Something I did not request nor want and would be responsible for the additional fuel. Upon checking out I was told that a receipt would be emailed to me. I have yet to receive it. I like the business (Millerville Ace) but did not like the UHaul experience. All in all an experience convincing me to next time check out the competition.

The only problem I came in contact with was I couldn't get the key with out the store opening, I was trying to do everything online without waiting

The customer service was horrible. The sales associate spent 45 minutes entering my information and printing out the contract. He kept making errors and throwing away the wrong forms. I left the rental facility 30 minutes after my checkout time due to his incompetence. He then followed me out of the store and decided to give me a guided tour that I kept telling him was unnecessary. I was late and I've rented before. He then stood outside the store and watched me pull off, it was extremely uncomfortable. When I returned about a hour later, I just used the drop box and online portal to return the truck. I never want to deal with him again. I've never had this kind of experience with Uhaul. I will never visit this facility again. The equipment was clean but the truck needs to be serviced, it runs loud and slow.

It took way too long to get the paperwork done !! Very frustrating !

Check out and return was very good and done professionally.

The pick up location assigned a return location downtown Houston, 30 miles away from our destination in north Houston, Louetta area. We were highly inconvenienced. We noticed several UHaul locations on our way as we drove to return the truck. We were charged extra miles and lost a day spent in traffic. We believe it would have been easier to return the truck closer to our location. This, as well as a recent experience where we rented a utility trailer that we could not use, as it was advertised as 6x12 but the gate was only 5ft wide. We were not given a refund because we drove it off the lot. Overall, after 2 unplesant experiences, we have a very negative opinion of UHaul and wI'll not likely use again - terrible customer service, we will use Penske next time.

There were no straps or stabilizing bungee cords etc in the U-haul. The staff member did not mention we would need these items to pack the U-haul properly

People on this location are providing great service. I love to go back for my future move.

They let me in early and got me on the road quickly. Great helpfulness.

During the vehicle inspection the man inspecting the vehicle with me opened the back door and said the vehicle was clean. It clearly had not been swept out. There was grass and dirt inside the van. I pointed out a set of luggage type keys that were right inside in the back door where we were standing. I have moved 13 times all over the country. I have used U-haul, Ryder, and Penske. When I return a vehicle I have used extensively, I sweep it out and return it clean. This van was not clean by my standards. I did not sweep out this van because I only put a small freezer in a box in it. I did not dirty the van. The same man with an arm brace showed me the contract illustration that claimed the vehicle had a FULL tank of gas. I pointed out to him that the fuel gauge was actually about an eighth of a tank less than a FULL tank. He said the computer could not represent that level of accuracy. When I returned the vehicle a different younger man accepted the vehicle and wanted to charge me $6 for not filling the tank. I put 0.832 of a gallon of gas in to replace the .07299 of a gallon that I used. The fuel gauge looks like this _ E \ | / F _ The needle was splitting the "F". I pointed that out to the man who claimed it was FULL. There was no disputing that I drove the cargo van 10 miles. The van's computer said it gets 13.7 mpg. How do I owe $6 worth of gas, 2.5 gallons, when I only used 10 miles worth of gas, in addition to the $2 that I put in it? The young guy kept saying that all the facts were not the point. I had initialed the contract stating that there was a FULL tank, when in fact it wasn't. The old guy who rented the van to me came and spoke to hime. They did not charge me the $6. As I told the guy with the attitude, if you want the vehicle returned with a FULL tank, give it to me with a FULL tank. Don't round up the amount of gas in the vehicle and expect me to fill up an eighth of a tank after driving 10 miles. I will not go there again, and I went home and immediately posted a review on Google Maps. I will probably copy and paste the same review to Yelp. https://goo.gl/maps/EhkxYA5XPzGWZsuQ9

The headlight was out and I could barely drive at night with it. The customer service experience was Horrible! Words cannot describe! Left with stress and a headache after finally getting the truck..I was there for well over an hour going thru hell and I will not rent from that location again! Now another charge on my bank account pending after I thought it was settled .