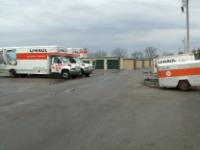 I was originally supposed to pick up the truck at Bali Paradise Tan in Newport, TN. My reservation was made three weeks in advance and confirmed. When I arrived at the location to pick up the truck at 9:00AM on December 28, 2020, they were closed, thought the sign said they opened at 8:30AM. I called the phone number listed and got no answer and no voice mail. I waited for 30 minutes, hoping they were just late and that someone would arrive. No one did. I called UHAUL and was told they were closed due to a power outage. The power outage had happened a few days before and power had been restored before the 28th. All other businesses in the area had power and were open. I had to drive an extra 20-25 miles to pick up a truck in the next city, Dandridge, TN which I was charged for the extra mileage and gas. I was on a tight timeline and the extra travel, extra gas, and almost two hour time delay in getting the truck, and the extra cost incurred was unacceptable. I was not offered any compensation for mileage or gas due to UHAUL's screw up in picking up the truck

My guy Accidentally left a mattress in the trailer which cost me $150... Wish they had contacted me and I would have come got it...

I am a customer of this facility, have been for years. I rented a truck to help my sister. The truck was in my name. I was returning it to this facility. With a rental, the ad stated a free month of storage rental. I asked for a free month of a building a I already had... they told me no - it was for new customers only. Well, keep treating your regular, good paying customers like crap & all you'll have will be NO Customers

Not open per hours posted. The attendant was on the lot so I couldn't drop off trailer for over 30 minutes. When she came to the office she was great. Just didn't like waiting and there was no place outside the gate to drop off. Both if those spots were full

All of the above was fine. What was not fine was I needed an open trailer which your website said Aaron's had. This was not the case and I did not have time to drive to an alternative location. How can your computer not know who has the right equipment? This was in no way Aaron's fault. I was hauling brick and had to duck into the enclosed trailer to load and remove cargo. Very annoying!! It seems after your corporate number sayis a certain place has the equipment you need, you must call there and verify. Most unsatisfactory.

Arranged to pick up truck at 8:30 am (time business opened) and employee/manager did not arrive to work until 9:15 am(she said she had to go the bank). I was almost an hour late meeting the movers which cost me $75 because they were on the clock starting at 9:00 am. She did not seem to care that she'd cost me $75. She said I'd have to take it up with UHaul bc they shouldn't have told me to come at that time. I did just that and the person over the area had wonderful customer service and was very apologetic for her tardiness and attitude. He offered a refund of my flat rate fee which was much appreciated. I will definitely do business with UHaul again, just at a different location.

Excellent service. The process was fast and streamlined due to our online reservation. Thank you

Jessica was very helpful and went above and beyond to make sure our move was hassle free. I will definitely recommend this location to everyone.

I was greeted and waited on by a very helpful and considerate young man who was very complimentary on my ability to make an online reservation, which he commented it was his easiest setup for a truck rental. Thank you

We had to wait for someone to arrive. The sign says open 9-5. I have been there at least 4 times and no one was there.

Make the Express check-in easier. It took a half an hour to check in to be able to get the keys.

There was an issue with the beginning mileage being recorded wrong in the system and on my contract. This was not noticed until I returned the truck. I drove the truck 98 miles but the mileage indicated that I had driven the truck over 400 miles. After some 'sleuthing' the office personnel, figured out the problem and it was corrected. The office personnel were very kind and knowledgeable. I recommend this office.

I have used this location before. The folks here are helpful and friendly, and the site is incredibly well-maintained and sharp.

Granted they were a little closer to civilization would be nice. But the service was superb. And so was the people.

Visit the pick up location for helpful information before picking up the equipment. This location was so great on getting this move to go smoothly. Great people great service.

Jeri was very professional, knowledgeable, pleasant, and very helpful. She was truly interested in helping us settle in our new home.

I was completely satisfied! There is nothing they could do to give ma a better experience! They were wonderful!

Hallmark Christmas ornaments were stolen. Does to unit torn up....person that replaced door was unprofessional. More ornaments broken and storage bins were cracked. Other items were also torn up.

The staff at Aaron's are wonderful folks, and if I need a storage facility again, then I will certainly give them my business.

HAve the correct adapter/ connectors for attaching to someone's vehicle. I had to go to Advanced Auto to get one.

Friendly and helpful attention to our needs over the last 3 weeks.

Asked about using the free months rental. Was told they don't participate in that! Website says any UHaul storage place. Wish I had known this before I rented for a second time. Free month rental wad one of the reasons I chose uhaul.

Both of the ladies were very respectful and knowledgeable. It was a pleasure doing business with them.

The truck was clean, drove very well and was easy on loading and unloading. Overall a problem free trip and pleasant adventure.

They was great, we are upset over the gas because we made sure we did not owe and was charged 44.00 but the young lady helping was great

There is a young woman at the desk. Don't know her name. She is very sweet, professional and polite.

Employee on duty was very good to deal with and knowledgeable.

She was awesome, best customer service I ever experienced

The lady in the office that help me was very sweet and nice. Hard to find people like that.

Very nice lady made sure that we got the equipment,and any education needed to use the same.

This U-Haul dealer does not participate in the one months free rent for a storage unit when renting a vehicle, very disappointing.

Personnel were very friendly and helpful

The staff were friendly and very helpful. They made a stressful situation easy. I would highly recommend them.

I waited 1 hour and 35 minutes to get the trailer I had reserved. The U-Haul computer system was down, and the attendant could not rent it to me without using your system. You need to have an alternate method of rental when your computer fails you!!!!!

Carrie was extremely helpful . Pricing, regulations, etc... was explained very well. They had plenty of supplies in that boxes, tape, bubble rap. and sent us to Lowes for shrink rap. Did not have any packing blankets of straps to rent. Truck was great with enough power to pull my full trailer over themountains

The agents were extremely pleasant and helpful!

People were great and very helpful.