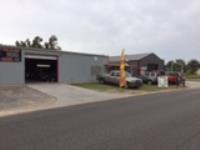 I was able to drop off after hours. We called after hours & actually spoke with an employee, not a recording, to verify where to leave the vehicle. Good experience all the way around.

The trailer was not swept out!

I went to drop off the trailer on 5:30 pm the day before my trailer was due back. The staff told me to go drop it off somewhere else because they were out of room. I told them this was my drop off location- as there was plenty of room to park it. We unhooked the trailer and they said they would check the trailer in the following morning. They did not check the trailer in as they said they would. I called to check on the return and they hung up on me. I had to take off work and drive back down there to get them to check it in. Very unprofessional folks at this location.

I was charged TWICE for the rental, once at the time of rental and a second time almost a month later! This is HORRIBLE business practice and I am not going to let this go!

No tire gauge, otherwise it was a great trip.

When we turned in the trucks the gentleman Was friendly

I got a Bill from U-Haul and they charged me an Additional $11.00 and some change for Gas. I put the Has Exactly Back Where it was at on the Gauge and I have asked to Reimbursed but haven't yet. Not too happy about that.

The personal were professional and extremly informative. The service was excellent and will recomend this location to anyone in need of a rental.

I reserved days in advance. When we arrived to pickup 26' van, we didn't even see one. He asked if we had an appointment? Then asked if we had reservations? Then felt he was pushing us towards a 20' van, which my companion felt would work. We did not even think about a walk through as to where lights were, etc. When I dropped off they apologized over and over because the tires were in such bad shape. I specifically asked if the van had been checked out and everything in good shape. Comment was "well we have only had 3 tires go bad". Also was quoted one price for 26', when we switched over to 20' trailer we were charged for not making reservation. At time of making reservations I was asked if I had a storage unit at that time. I stated no, needed 10'x20'. Was told that location had them and one was reserved. When I contacted to verify address, was told they did not have 10'x20'. They would give me one on street level and would give me a smaller one unit to go with larger unit at no charge. When I arrived to unload, they did not have a street level, but would give me a smaller unit along with larger unit on second floor, but they could not get them close together. But would not charge me extra. The first month is free, so I guess I shouldn't complain. I unfortunately will need to rent a moving van to move the rest of my furniture. I do have to state I did receive a $10.00 credit when I returned the van. But if we had an accident due to bad tires, $10.00 would not have made up for any accident.

I arrived in Wodward OK on the 9th and called they said to drop it off and they would check it in in the AM. I called on the 11th they still had not checked it in. Still no emails I called Crystal MN on the 15th to check on it. It still has not been checked in. Crystal was to get a hold of them to check it in. I'm waiting for confirmation that this has been done.

Everything went really well and equipment was excellent. No recommendations from me.

Outstanding Service and help in determining what size truck would best fit our needs by the gentleman at Brothers.

The fuel tank was on empty. I called and they did take care of my situation and did a good job getting that squared away. The truck itself was dirty in the cab and there were cigarette butts in the cupholders.

The truck was dirty. The windshield was plastered with bugs. Needed to have been washed. The dealer dis not do a run through on how to operate any thing.

Service was great, location just wasn't anything special. It was about what I would expect. Equipment was awesome!! It was a surprise to be in a brand new van. Would at least like cruise control though, it makes a 3 hour drive a little long. That's my only complaint if I had to have one.