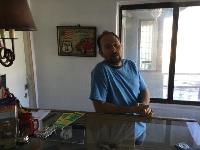 The truck was dirty outside, and had wood chips still in the back. The app didn't work. I called and text Rich the guy who runs the place, he is abrupt and dismissive. We finally got everything worked out 1 and 1/2 hours later, with the help of your traffic office. Rich was arguing with the traffic office person, who actually helped us. Next time we will travel 30 miles to Flagstaff. It will cost us more money, but it will be worth it.

Could not have gone any smoother! Thanks Rich at Uhaul Grand Motel Chris

1) My drop off location that was given to me no longer accepted them. 2) Your customer service wait took over 45 minutes to speak to anyone. Poor service.

Have a sign out that states it's a business for u-hauls; instead of having u-haul equipment out in the open to advertise the service.

The UHaul representative, Rich Scibetta, went out of his way to help me when my RV battery went dead (I was towing an auto transport during the day and forgot to turn my RV lights off). I also needed my Oman 5500 generator serviced. He spoke with an RV service the next morning and, as he let me keep the RV in front of the Grand Motel overnight. By the time I was up this morning he had an afternoon appointment for my RV. He certainly is an excellent ambassador for UHaul and Williams, Arizona!

They should be very upfront that they are not a store or location to meet and talk with people. I was not aware that I HAD to use the app until I called the owner who said " oh ya, I was going to call you to let you know tomorrow you need to use the app" Also, I rented a 10ft truck due to the fragile cargo I was taking down to Phoenix. I had braces, straps, and mounts all prepared for a 10ft truck. Then surprise, I HAD to get a 15ft truck. Which added 4 hours to my move because of having to come up with a new brace and strap system. Not OK . I received like 2 phone calls about the rental all saying I had only a 15 min window to use the app and I had to tell them EXACTLY what time I would be there to get the truck to get the keys.. I DID(!!!) tell them 10 am in the original reservation. Then trying to get the app to work in a timely fashion was a nightmare it took almost 20 min to get the code when I was standing out in the cold and wind. This whole thing was a nightmare from the start.

I received professional assistance from the owner and was treated very kindly. I would very much recommend this Uhaul location.

No one is there to help. It took multiple calls to get the vehicle and then the key was for the wrong vehicle

The 24/7 checkin process was not clearly explained before hand. It would have been nice to be prepared with the additional information they requested upon arrival or have the backup documents they request on hand so I wouldn't have to drive an extra 100+ miles So much room for improvement

Customer service at its finest! Rich is very friendly and personable. He went above and beyond to ensure my family had all we needed to make a successful move cross-country. Even at the last minute he was available to meet my family's needed. Thank you.

DO NOT RENT U HAUL. My vehical was NOT what I ordered. NOT ready on time. A DEATH TRAP that had been either vandalized or simply not maintained. We lost 1/2 tank of gas spraying out on the highway from a faulty fuel line. Luckily my wife ( following) spotted it and stopped me before the vehicle exploded. Trying to resolve this issue - UHaul offered no help. No returned calls. NOTHING. They left us NO option but to seek legal assistance for time, exposure to fuel and damages to our property.

They need a clear sign with UHAL logo and visible address

Best customer service of all the non-Uhaul locations I've had yet.

I made a reservation for the third threw the 9th of december. The owner of the Grand hotel called within 5 min of the reservation station that he wants to rent me the truck today (now the 1st.) And im not going to charge you. I was not only charged the 2 extra days, i was charged for an extra 7 days of rental fees. I had to spend almost an hour on the phone to get to the bottom of the over charges. The Grand Hotel has no bussiness renting Uhaul baised on the unavailability of rental needs of the customer.

The gentleman who helped us at the pick up site was absolutely the best he could have been for us! Exceptional service and attitude. I wish everyone could be as helpful and kind as he was!

Im from missouri and was on vacation when my car broke down in williams az. The gentleman who helped me with my rental went above and beyond what he truly had to do. I have a bad foot and i was more than five blicks away with a broke down vehicle. He came and picked me up to save me from having to walk. He also made sure i completely unerstood the rental agreement. Without makeing me feel stupid like some other places will. I found a new friend in williams az. To him i am truly gratefull.

The "person" was rude and arrogant. Interrupted a conversation I was having with my daughter and then had to give me a lecture regarding why I had to use him instead of the location I had reserved at. He was an a** to be honest. He charged me $20 to hook up the trailer, then tied down the car with the tires turned and one overlapping the edge, When I asked him about turning the tires and lied to me and said that is the way it should be. I asked about the tire overlapping and he said my car was too wide! AND the location... had no uhaul sign to indicated I was at the right place.

The invoice stated I went 4.4 miles, less than 5 miles with the truck and he charged me 1.9 gal. almost 2 gals, which was an addition charge of $8.55 for gas. The rental dealer said he could not make a change to the invoice that I would have to call the 1-800 number. He called me first thing in the morning to say that he was having a problem with my charge card and he needed a different card, which I gave him. I went down to my bank and the card was fine.