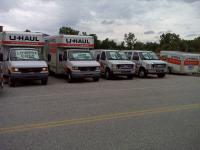 I booked a 26 ft truck with Rutland a month in advance. Four days before my move I was informed they didn't have my truck and I have to pick it up from Middlebury which is another 40 minutes from Rutland and I live in Woodstock which is 45 minutes from Rutland. And of course I'd be responsible for the mileage for my inconvenience to get to where I need to be in the first place. I canceled that reservation because I was able to book with the location in White River Junction. I show up and they can't find my reservation because someone booked me for a 10 foot truck. They ended up giving me a 20 foot truck which I had to do the trip twice because I didn't have the right size truck so I overpaid. In addition I realize the next morning that they gave me the paperwork for a different person and a different truck. My name is not Kevin B. My name is Lori R. And I did not travel 49,000 miles according to the paperwork I got. So scrambling for a truck but I booked a month in advance and walking into the hot mess and putting me behind an hour Because the attendant didn't bother checking in the truck that was returned the day before that was substituted to me. I rate this experience as I will never return as a customer. Too bad because I just moved my things to a temporary location due to my closing being delayed. Ryder is around the corner I will go to them next time

If it wasn't for the staff at Bob's Service Center who went above and beyond to help me, I would have had to park the UHAUL in some parking lot somewhere overnight. Instead they allowed me to store the truck at their lot and pick it up in the morning. (see my comments under rental pick up location). However, when I was due to return the truck to this location, they informed me that the drop off location as changed to another location. My car was parked at this location. After being on hold with UHAUL for over 15 minutes without having my call answered, in an attempt to have them change the drop off location to my originally scheduled location, the staff came out and advised that they would make the change for me. In case you are not aware renters figure in the number of miles they have to drive / amount of gas they have to buy, etc., into the cost of renting with UHAUL. Although I will now buy my gas at Bob's, I will think twice before ever renting with UHAUL again. It's obvious you don't care about my business!!!! Bob's Service Center rocks!!!!

This location is great, however information filled out online as check-in was not transmitted to this location, so we had to go through all the insurance coverages again which took an extra 10+ minutes. Staff was friendly but did not go above and beyond.

Gave my false information and said to not know anything with the billing. Totally unhelpful and fraudulent experience. Would never recommend using this location or uhaul again.

Bob's Service Center was yet again a wonderful experience. This is the 5th time I've rented a U-Haul recently due to a very complicated move with my large family and every time Bob and his crew ( especially Ryan, Spencer, and James ) have been above reproach with their service and availability.

Very efficient service. I appreciated their kindness and friendliness. Will return again.

Service was friendly and accommodating.

The guys at Bob's were very friendly. The truck was clean and ready to go.

The guy working here at the time of drop off was so rude from start to finish!! I went a little over my mileage so I owed $5.67 and he was so upset by the fact that I wanted to pay it in cash instead of card. I will not go back to this location if he is working,

Bob's Service Repair in White River Junction, VT. Young employee acted like I was disturbing him, moved slowly, and kept readjusting his ear buds to listen to music during the return process. Rude. Show a little appreciation for your customers or you won't have any.

Ben, the manager keeps the standard and delivery of goods very high both by his people/customer skills and extremely fun personality. The Saturday afternoon person Cole A, was difficult to deal with. He was disrespectful when I didn't know where to park the truck and would not allow me to get gas. Then attempted to charge me for an extra day when I was not even 5 minutes late. Later when I trie dto reason things out he would not but signed a note that Ben would be in touch before I was charged. This did not happen. Furthermore he told me in front of the other customer that I was the disrespectful one.

Staff was rude and unhappy when he saw that we were returning a truck at his location. Terrible customer service.

Clerk was clueless...given wrong key to truck....gas was wrong on receipt....wait was way to long

Confused why I was charged for extra miles. Bob's rented to me for 3 days so that I would have another 150 mi. Guy renting said 150 mi per day, which we estimated would be more than enough to drive to Falmouth, MA, and then Boston. I was well within the 450 mi allotted. So why the extra charge when I dropped it off EARLY in Boston?

Fire the a hole behind the counter

The guy who took care of the reservation onsite was friendly and helpful. Very good experience picking up my truck at Bobs. And the truck drove nicely.

I don't see how you cpuld improve your outstanding service. Ben at Bobs displayed real caring for a strnger - me.

My only comment would be is that I did not need the truck for the full 6 hours. I had the truck maybe just over 2 hours. With that being the case there should of been some sort of pro rate I was given. Instead of paying almost $50 I think $25 would of been more suitable. I will say the two young boys (men) working did a great job. They were right on the ball with everything and handling what needed to be done with no problem.

Great truck and great people to work with!!

The staff need to be better trained on leasing U-Haul. When I turned the vehicle in they was some confusion on mileage. When they looked in to the mileage on documented on my slip was from another truck. The manager had to be called in to try to figure out how many miles I had put on the vehicle. Really not sure if I was charged correctly or not.