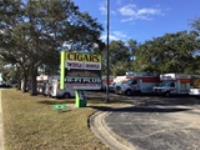 My only complaint was the process for returning an item after hours. If you have a smartphone and the UHaul app on it, everything goes smoothly. However, if you try to use the website to enter the return information, I could not get it to work and your customer service rep could not help me either. I was lucky that my son was with me and he downloaded the app to his smartphone and we filled out the necessary information. Instructions for using the website should be documented so that either the customer or your customer service representative would know how to do.

A uhaul should have ramps to making moving furniture easier.!To be given a truck with no ramp is useless.

Did not get the right uhaul number trailer. It was not clean. The gentleman was not friendly.

The van we got had roaches in it. we did see them when we first picked up the van. When i said something when returning it the people working could of cared less.

Rented a trailer from Linton Foster. Very quick friendly service. Even had an associate hook it up. Good rate, would definitely recommend this place.

Using the app was an awful experience, I ended up having to call and was on hold for 20 min only to be transferred and on hold again In order to get the pick up my truck option and then I had to call again in order to get the payment code for the movers. It was very frustrating and inconvenient, esp since I was in the middle of a move and had the movers and friends waiting in me

The people were freindly. The location was convenient. The communication was excellent.

I've requested a dolly as part of the rental and I've assumed that it was on the truck, but it was not.

Strange interaction with staff. He thought I was someone else but didn't believe me.

Highly pissed off that I was charged over $8 for gas when I returned, even though I put 3 gallons in it right before I dropped it off and I only drove 39.2 miles. Was told it got around 15 miles to the gallon, so 3 gallons was more than enough

I ATTEMPTED to do a self pickup ...and let me tell what piece of garbage service you have on the self pickups.... it took over 1 hour to get the approval.... thank God there was a guy physically present in the dropoff pick up area and he was able to call you guys....because 40 mins wait times are unacceptable ...

can't get a reply from uhaul when my bill is wrong. I guess I will have to dispute it with my credit card company. Hate to take it out on the location but they were the ones that told me they were closed on the week end and I didn't need to return the truck until monday. I returned it on sunday and you still charged me for Monday. DO WHAT YOU SAY!

Self drop off while the business was closed on Sunday so do have any feedback.

Don't let another store (Harbor City location) call and try to steal this guy's sale. He got the 26 ft truck for me. I got called by Harbor City location and told the 26 ft truck was Not at New Haven. That was Not True. I stayed with the original contact, New Haven. The guy called me the morning of the move. Yeah, he has an accent. So what. Was surprised at another store calling me. I went with him bc it was ethical and more convenient.

The truck was not safe at highway speeds.

The battery in the truck was dead!!!!

Pretty much everything, the trailer was damaged, the gentleman at Hi Fi was nice enough. Secondly had to return some boxes because I was over prepared. So I took them to a uhaul location to return. STOOD IN LINE FOR AN HOUR AND A HALF. The staff at the US 1 location in Melbourne FL is so under trained it astounded me to see how Uhaul continues to let them tarnish their... well... nevermind. The only reason I picked Uhaul was because they are the only service that offers trailers. Then after I arrived in Virginia Beach, I was told to drop off the trailer in Chesapeake. This is hands down the worst place. Upon arriving I asked a gentleman working outside if he worked there. He did not acknowledge me or the trailer, then another guy walked out. Told me where to park the trailer, we are not suppose to park the trailer. An equipment drop off is there for a reason. But we decided to help out and try and park the trailer. Both of the guys mentioned afore were standing there one on his phone and the other decided to chirp in when the trailer was going the wrong direction. It took us three times and everytime he said the same thing. So instead of constructive cristism I told him we got it and he stormed off and went inside and with that we dropped the trailer where it was. I went inside to sign paper work and asked for the manager. I was told by the girl at the front desk that she was kind of a manager. Yall have to get this whole customer service thing down. You guys have the only trailers available for rental. Everytime I walk into a uhaul I'm going to regret my decision of going in for anytime here in out. If you have any further questions of how your company could have made my move any more of a nightmare please resch out to me via email Jackson.shockley12@gmail.com