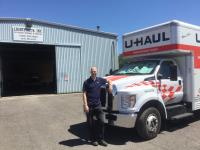 I was expecting some problems since I over estimated the mileage I would drive. It was no problems , they charged me just for the mileage I drove and let me drop if off after business hours.

Easy to schedule truck online, and then in-person pick-up and check-out was easy, as well. Truck ran well and was able to haul everything I needed it to for our move. Good experience

When checking in the attendant was very friendly and fast with checkout.

Great people and great service each time we drop off.

The person who checked me in was rude when I asked him to put on his mask. He refused stating, "I don't need one".

Great customer service and makes the process of renting a trailer very smooth.

I reserved my truck to pick up at 8am on Saturday, October 31. I called on the 30th to confirm pick up and was told by the location they did not have my truck. I then called a number in Spokane and was told I could pick up a truck at noon at a different location. That's not the time I reserved. I was then told I could drive 60 miles to pick up a truck on Friday in Walla Walla which I did. Customer service was NOT going to offer a discount or extra mileage on the truck until I insisted. Overall - not happy with the initial service from U-Haul. Truck was fine even though it had a "SERVICE TIRE MONITOR" light when I picked it up. I told this to the representative and was told it would be fine.

The pickup location does everything to add additional incorrect charges after I checkout. Two times this happened at the same location. The receiving side was absolutely the best!

I needed the truck for only a day. It was fast and easy to rent.

My day renting a u haul was a day from hell. I went into Lightfoots U Haul rentals and since I was going to use a truck on a Sunday and they are closed on Sundays he suggested renting online, so I went online registered went thru the entire process and then called the day before picking up the truck rental and was told everything thing was a go. I arrived at 9:00 signed into my account and went into Pick Up my Truck and for a hour it would not allow me to go further and continued to sayitcould not verify my location, I called your800 number 3 times and was hung up on 3 times. I was sooo stressed as I had people waiting to help me move furniture. When I was finally able to get in by using Safari instead of Google I received the password and went to unlock the combination, the combination was impossible to work could not get the letters to spin, called number on sign of business and was told I was speaking to the towing guy and he could not do anything, we finally got the lock to work and got our key an hour and a half later then when I was supposed to hv gotten it, all this with 30 degree weather. I feel your company should have paid me instead of the other way around. Miserable day.

There was no one to help me take the car off the dolly. I had to find a stranger next door to help me understand how to remove the cinched straps and I had to crawl under car to unhook some chains.

Started out in Pasco U-Haul on court st. The girl hat helped was a joke. If I didn't need it ASAP I wouldn't of went to location on 28th in Pasco that found me this one in Walla Walla.

Can't think of much. It's an old location with multi-use businesses in the same building and parking lot. Other than spending the money to pave the lot, I can't see anything else. This would just make the location more attractive, but wouldn't change the good service.

Everything was cool. Tim at Lightfoot was super chill, cool, and helpful. Will go here again

When I was doing my inspection of the trailer when picking it up, I noticed that one of the wheels seemed to have a problem - probably a wheel bearing. They gave me a different trailer to rent. I would think they would catch something that serious in their inspections. Overall, they were very nice to deal with and took care of the problem without question.

Be there when you said you're going to be there. I had 4 guys waiting 11/2 hrs for truck to load Otherwise everything was good

Guy admitted that for him, U-Haul is â€œjust a side businessâ€ and then said told me that U-Haul corporate doesn't care. They just want to be a side business.

Nice folks who were quite helpful!

They were helpful but were not wearing masks for my safety

Just to make sure the windows are clean

We were able to drop off the truck, get a quick go-over and be on our way.

Be honest with your customer and please don't change our drop off location for last minute. Terrible customer service! No more Uhaul!!!