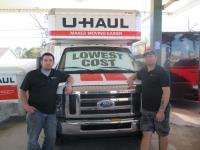 This place was horrible. Not only was it difficult to find, the parking lot was dirty, uneven and without any lighting. Some guy tried to talk to me who obviously was a vagrant, it felt very unsafe. It is also no longer called or labeled â€œKingdom automotiveâ€ it's now â€œmikesâ€ or something like that. Definitely recommend you stop using them as a dropsite seeing as there is a safer more official uhaul drop site a block away

My original pick up location did not have the trailer or my reservation so they sent me to another location. The other location was nice but the unit was extremely dirty and greasy so I had to go wash it out. I believe this location was using it to haul their race car parts (I noticed they had a race car in their shop). It also smelled like gas; very disappointed.

Confusion in the drop off location

Location was primarily an auto repair shop but the staff was still courteous and helpful while I returned the trailer.

System problems caused a big delay, and did not allow for me to get a receipt.

My comments are not about the location, but about the overall experience with Uhaul, both online reservations as well as calling the customer service number. The rate online is confusing. According to my contract, it gave me 4 days between pick up and drop off. This was a one way out of town trip. I didn't know if the rate was a daily rate or for the entire 4 day period. As it turns out, it was only a two-day rental. There definitely needs to be more clarity on this. When I called customer service for clarification, I was on hold for quite some time. When someone finally picked up the call, he was not very helpful and seemed confused himself. Could definitely be better. Also, when we picked up the truck, it was not swept out - had big clumps of hair and dirt that we had to remove before putting our stuff in.

Dishonest dealer. Did not assist with getting the trailer. Said put it on yourself. We tried, but could not as it was wedged between two others. Went back to office and they were closed and had left (well before posted closing time). We were forced to go elsewhere (in UHaul system - there is a record) and never picked up the trailer. Nonetheless Kingdom Automotive charged us for it. The worst is that when we questioned why, they lied and said we picked the trailer up for two days. Not true - it never left their lot (actually the street). Even lied to Bank of America and told them the trailer was used. Mistakes can be allowed and understood. Intentional deception, lying and lack of character cannot be tolerated. This is the worst U-haul location we have ever seen.

It is not a normal or standard U-Haul office.

I was sent here because my initial rental location, Diamond Storage or Rental, Did not have the trailer I booked 4 days earlier and I filled out the express check in. I showed up and he said , "oh, we rented that out 2 days ago" he did not call me or do anything but blame it on the computer. I told him he could walk 50 steps outside and tell if he had the trailer. I then went to Kingdom Automotive where they were excellent. I had to drive about 25 miles out of my way to accomplish this and approximately 2 hours of time and I had paid loaders waiting on me. I should be compensated for that ! I DO NOT RECOMMEND THE DIAMOND RENTAL!

The return process went well and the agent was very accommodating, however, I had to find a spot to unhook the rental trailer down the street from the office and then had to unhook the trailer myself.

Have everything ready to go on arrival, I was late and still had to wait.

The floor on right side of trailer was greasy and dirty when I picked it up. The people were very nice. The location was not optimal.

Had to stop by and pick up a dolly and the lady was absolutely amazing, she didn't even charge me for the dolly. It was a life-saver since I had to unpack the truck at Baylor myself. :) Thank you so much!

Tavoris was a stand up guy in temple midway store...and provided the customer service that is rare in today's service industry

I was over charged for the rental due to the hours of operation at this location, yet the location couldnt process a refund so i had to call customer service to process. The site allowed me to book for eeturn at 5 pm, yet the location cloases at 1230 on saturday and not even open on sunday. It took seconds to overcharge yet it was "2-5 days" to get it returned.

He was great, I'd definitely recommend them. Plan on using them again in about a year.

May be a sign out front that can be seen from the road declaring the location is a U-Haul store.

Did not have the truck i reserved and I was over charged. Will be calling 800 # to ask for refund.

Hope that $280 was worth a lifetime customer. Both shop stores were great and more than helpful!! In a 20 year military career and the subsequent 10 years since retirement I used Uhaul for large and small project moves north of 15 times. I was forced to break off a 600 mile car hauler move at the 100 mile point due at o dark thirty to support family emergency. UHAUL Corporate refusing to give me even a partial credit. Cool. Budget or Penske it is.

This was the worst situation ever the trailer was parked on the street with a police tag on it. I got little to no help hooking up. The guy never tested the lights (which turned out to be defective), nor did he attach the safety chains.

We were running 10 minutes late. Matt refused to wait, said he had a diner reservation. Our order was cancelled. When we arrived the next morning we had to wait while they went to get paper for the printer. Then when we arrived to drop off truck they told us the mileage was over. Because Matt did not go out and visually check it.

Very helpful, called me after I submitted my reservation to make sure that I knew they got and would be ready for pickup.