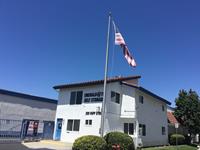 I needed a pick-up to move a couple of large outdoor planters, lawnmower and few outdoor tools, edger, weed whacker...etc. Truck was clean and under 9K miles. Served my needs well. Staff was professional and it was a really good experience. I would rent from this location again.

The agent was super nice & helpful too! His system was down but he still was able to advise us on how to return UHaul truck.

They checked me in, in under 30 seconds. On point, excellent customer service! Received email from them on final inspection within 2 hrs!

Very pleasant staff. In and out quickly.

Instead of having the gas tank filled which removes all doubt as to how much gas to put in the tank at the end of the rental the agency had it at a partial level and then lied as to how much i used. Fortunately I used the app to show the incorrect initial tank level. Unfortunately for me the agency did not verify my correction before they charged me for the use of 11 gallons for an 11 mile trip. This just defies logical sense and is borderline unethical. Common sense would tell you that the truck did not use 11 gallons for 11 miles. There is no reason to NOT have the tanks filled to the top unless one wants to create a possibility to be able to incorrectly charge for fuel.

Limited vehicles. Not alot of varies sized vans. Only had 1 small box truck and a pickup truck available.

Fraud, lucky i took pictures of the gas. they charged me for $38.00 for gas when i filled it up to the exact spot where it left. TAKE PICTURES or you will get ripped off!!!

Quick and easy check out. Friendly folks at the counter.

I originally booked at the Carlsbad location for a 2 pm pick up. I was told at the Carlsbad location that my reservation was moved to the Emerald location. Didn't receive any notice from Uhaul AND I had even talked with one of your phone reps that morning and confirmed the reservation in Carlsbad. The women at the Carlsbad location was unhelpful, to say the least. As a result, my mileage costs increased and I received the truck a half-hour later than planned, thereby preventing me from returning to Emerald's location by its 6 pm. closing.....The Emerald personnel were great, but the lack of customer service (or even a willingness to help out) was incredibly lacking in Carlsbad. Uhaul receives a 3 recommendation, Emerald a 9 recommendation, and Carlsbad, a big ZERO recommendation.

Experience was great; quick and exactly what I needed. Keep up the great work!

I am not sure if it is possible to improve the experience. Great people and fantastic service! Next time I need a uhaul, this is where I'll check first!

I am really happy with the service at this location, I called to make sure they were opened and the guy that answered the phone was very friendly and helpful. I told him I was 7 min away and he met me at the gate as soon as I got there. He asked me if I had gotten all my stuff and I told him yes, while waiting for my ride he came back with my sunglasses that i had left in the truck.

This office (Emerald at 78 Self Storage) showed absolutely no concern about health and safety (given the pandemic) and did not in any way follow U-Haul's published protocols on cleanliness. First, the customer service employee was not wearing a mask and expected me to go up to the counter within just a few feet of him. I told him that I was very uncomfortable that he was not wearing a mask - to which he asked "Do you want me to wear a mask?" I said yes of course, and then he walked into the the back and came out wearing one. I should not have had to ask. Second, when I asked if the truck I was about to use had been cleaned/sanitized after the last person used it (which the website states is done), he said they only clean the trucks IF THEY LOOK DIRTY or if there is trash in it. Otherwise, they don't. I asked how long it had been since someone had been in it - and he said "we pretty much rent them out daily." So I asked if he could provide me with something to sanitize the inside (steering wheel, etc.), and he went in the back and handed me 2 Clorox wipes. When I asked for more, he went and got me a third and said that's all he could give me. I was appalled - and he seemed completely unconcerned.

Service was professional. Number of vehicles available was limited. Vehicle was clean and in good condition.

Keep up the good work. We had a pleasant experience and would return as a need arises. Thank you!

There was a lock attached to the back of the U-Haul that we were initially not given a key to but then were given a key that did not work with the lock. We didn't leave the truck with stuff in it so it was not crucial to be able to lock but for some guests being able to lock the U-haul may be important for the security of their items.

My pick-up location was changed from Carlsbad to Vista which impacted my mileage allowance. I only drove the truck from Pick up location to our where we loaded the truck, to our final destination and then to drop off. I was charged extra miles, which I didn't appreciate, and I believe it was the distance difference between Carlsbad and Vista. U-Haul should have revised the mileage allowance to the correct distance when the pick up location changed. Also, in the future, U-Haul should allow for a small amount of extra mileage rather than making sure they charge for each mile (even though that mileage was incorrectly calculated).

drop off point were change twice.

Interior of truck and misc crumbs and stuff in it but what what really disgusting was someone toenail. Especially with covid these trucks need be cleaned and I want going to touch that toenail unsanitary

I was double charged for equipment and have asked for a refund.

Reserved 10ft truck online, received confirmation the morning of saying my truck would be ready at 9am. Upon arrival I was told that they did not have a truck for me as it was not returned the day before. I was moving my 87 yr. old Mother out of her house and that was the only day we could do it. I even hired workers to assist who were waiting for me with the truck to get started. Half an hour later we were still waiting for what I don't know. A lady pulled up with a different size truck and I asked the clerk if I could have that one at the same price, which he did. Lot's of nerves and stress but by almost 10am we were finally out of there. We returned the truck before 1pm we returned the truck only had it a couple of hours. I just find this whole experience very frustrating.

The site was closed and we had problems getting the on line checking to work we stayed a hr on the phone with the 800 line and web site chat, it was very fustrating