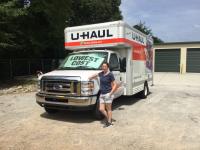 I understand that the office was closed for the day but there could've been signage with instructions for returning trucks. No one returned my call and my truck wasn't turned in on their system prompting UHaul to think I still had everything.

I had a number of issues and I am still waiting for them to be solved. I rented 2 uhauls at separate times and both had issues. Although the first went a bit smoother it still bad service. I will try to be brief. Uhaul #1: I order online and finished booking over the phone. When I talked to the guy I let him know that I would not close on my house until 1pm and that I would need time to get the truck unloaded and get it back to you. He said he had given me 3 full days and extra mileage. He also said that I had to return it to a specific site in Acworth which is about 15 miles from where I stay. When I went to return the uhaul using online method, it said that I owed $57 more for returning it late and mile overage. I am supposed to be receiving a call about the charges but I have not heard from anyone. Uhaul #2: First, I called in to order a truck and I was told to go to one site and the site was closed. I then went to the place where I ordered the first truck from and they had a truck there, but they did not allow me to get that truck. Instead they sent me down the street to a different site. It took over 2 hours to get the truck, which made us have to change our plans in getting the 1st truck up to our new house and unpack it. However, I wasn't worried about it at the time because I was told that I had extras days and extra mileage, but it didn't end up being the case. Once we received the truck we had an issue with the charges. I was changed for 2 more trucks and I had an additional charge of 16.05 for some reason. I presume that it was because the person helping us with the order went back and forth between different trucks. Of course I didnt drive 2 trucks of the lot, so I'm not sure why they are having an issue removing the charge from my card. Both trucks were supposed to have a hand truck but neither did. This time I called in to ask if I had to return it to the Acworth site and the guy told me that I could take it to the closest site. I still received an overage of mileage, but it was only $8. I called the regional manager. He stated that he was busy and would call me back. He then asked me to text him my name and the contract number and he would give me a call back. Well it's been 2 days and I have yet to hear from him. I know you have to run a business, but can you not scam people in to driving extra miles to return a truck so that you can make extra money. Overall I have been charged the following; 108 + 57 = 165 131 113 + 8 = 121 16 I paid approx. $425 for 2 trucks going one way about 40 miles away. I signed up for a truck at 108 and 113, which should have been $221.

The customer service is awesome

The actual time it takes to print and complete the paperwork for the rental seems to be excessive and redundant to an extent. Can understand the "first ever" rental but, Basic information should mean noting 'changes' and done. If necessary then so be it.

Maybe not charging so much for someone have a trailer an hour and not even using it....

Need better mileage set up, better to be safe than sorry. In my case this was a big error.

had to hook / unhook trailer myself. no assistance provided. would not open door upon return. U-Haul needs to drop this facility!

I just looked at my receipt. I have been extremely busy. They charged me 12.00 and I filled up right were it told me to fill up. I think they thought full but not what my contract shows. I will be calling them in the morning.

I set up my reservation online and opted out of the insurance, but when I went to the location, i was mandated to pay for the insurance. Can i get that reimbursed back please? Overall, the agents were nice and pleasant.

I had such a fantastic experience at this location. Thank you very much

Sally was so helpful!

Awesome service. Than you so much for being fast on me calling on very short notice.

The truck was out of gas and wouldn't crank when I arrived on time to pick it up. I had to go get a gas can from home, get gas, crank the truck, get gas and then drive home. It put me off schedule with my movers. They also rented the other 26' truck to the customers behind me in line. The person at the counter said they checked it in last week on empty. Why would they not get some gas prior to my arrival. The truck barely had power steering and was almost impossible to steer at a slow speed. I'm a 280 lb man and it took everything I had to turn the wheel in reverse. This was unacceptable.

This location made me get the additional insurance. Costing me 16 dollars for a service I didn't need.

Truck had such a bad alignment is was hard to drive e the steering wheel was turning left for me to go straight. The cab smelled the back was dirty and full of water when I opened the cargo area at my house it rained for two days was not able to get my truck into new house drink e way called the rental place about this and they told me there was nothing they could do about it so I had to add extra miles to the truck and gas just to do one trip. The power steering in the truck stopped working through out my drive. Worst experience ever will never rent a u haul again.

I ordered my U-Haul online and was picking it up at my storage building. U-Haul changed my pickup location then charged me for extra miles. Also I returned the truck with exactly the same amount of gas and they still charged me $20 I'm not a happy customer.

The representative was very nice and helpful

These folks were sweet as pie and very understanding for the situation the location I originally rented from put me in before I had to return the truck to them. I should've just rented and returned to this same location.. lesson learned.. that's what I get for trying to save money. Need more employees like these at your other locations!!!

The young lady was very unprofessional. I reported it to Uhaul corporate office.

I had a great experience. Met someone who was way to cute she was friendly helped me out and took care of me as I believe she would any customer

Failure to honor contacted equipment on date reserved, 7/19/19. Attendant on duty Fri. 7/19/19 caused problem and took no responsibility for failure in addition to being rude. Explanation was in appropriate"you will have to go to our sister location". Not being able to leave at scheduled time adding three hours to our trip.

Great Customer Service.I would recommend this U haul and storage business to other customers.