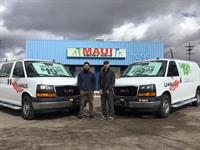 I requested a van day of, so I'm glad to have gotten the van same day; however: I Reserved a van in one location but it was not ready so I was asked to pick up my reserved van in a different location. Slight inconvenience but overall not bad.

I was at the drop off location on time. The uhaul/go drop off was hard to figure out. I did not use it. The order was NOT ON the uhaul app. I had use my gmail to access the drop off function. This made ME late drop off.

Terrible TERRIBLE online picking up experience. Store was perfect but U-Haul needs some work on their end.

Dude at the counter was professional and got the job done. 10+++

This uhaul location was fine... However, the 24/7 truck share needs improvement. The previous day I filled out all the information I could on the app. When I arrived at the location to pick up the van, I immediately had to call customer service because apparently my reservation hadn't been finalized, even though I called the day before to confirm. This was sorted out quickly, but then the app asked for a ton of additional information, information that would have been very easy to provide the day before but was incredibly annoying to enter while in the parking lot on an already extremely busy moving day. Also, at several points I had difficulty uploading the photos they wanted, and twice I had to start the process over again because the app glitched out. The app needs work. Luckily, the customer service employees I talked to were very professional.

The U-hual employee was very nice and explained everything clearly

This location was the one I selected more than a MONTH AGO when I made the reservation. It was on my original contract which was then CHANGED without my permission.The clerk at this location refused to let me drop the truck off because there was "not enough room". that is not my problem. I paid in full for the one way rental and returned the truck PER the contract. This clerk then FRAUDULENTLY charged me more money for the drop off. I have disputed the charge with my card company and have contacted the Tucson Police Department to press charges for fraud. If UHAUL does not immediately rectify this and refund the extra charge, and apologize for the criminal behavior of this clerk, I will contact every person I know on every social media site I know and will show the document as proof. I hope the $82 that I was swindled out of was worth it to your company.

Ivan was kind and made sure to keep up with customers the best he could. Although poor thing was overwhelmed and really could have used an extra hand during this busy season with the university students moving in. Maybe a consideration for next time. Build in an extra 20 minutes, just in case.

The cargo van I was given had a dent in the front bumper which was grinding on the tire when I made a right turn out of the parking lot. Upon returning the vehicle, I mentioned it to the man working and told him that it was like that when I got it and didn't believe me, and had I not already bought the insurance package I would have been wrongly penalized for something I didn't do. The man also showed up to work almost a half hour late, and the van I was given was impossible to pull out of the lot given that there was another van parked directly in front of it with a fence right behind it. The key also wasn't available when the website said it would be because the establishment opened late due to the man working being late.

Have knowledgeable people renting. Clean vehicle inside n out.

The Maui Smoke Shop was great and very friendly. When we go the truck to the house we discovered there was an oily substance in the truck and had to return in. The area manager Rob said there were no more trucks in the area so we had to rent from another company. Rob told my brother in law (who picked up the truck) that if I gave him a call he could get our refund done. My first call wasn't returned for a week and he left me a message. I've called several more times over the last few weeks with no response. At this point I'm going to have to contest the charge with my credit card company and I'm still having to follow up to get the gas we put in the truck refunded. Such a horrible experience!

It was so quick and seamless that I cannot offer a more complete review. It is how actually drop off should be. Thanks so much.

The truck was not ready when I went to pick it up. I had to wait an additional hour for it to be ready. When I called the 24-hour number provided for the pick-up location I got a voicemail. I had to call back three times over the next hour to get speak to a person. The equipment I requested and was charged for was not in the truck. Very disappointing and frustrating to deal with this on the day of my move. I was told the equipment charges would be reversed because I never received them but the charges remain.

Explain more about what to do when you go to pick up truck and no one there.

Service manager, Ron & Service tech, Ivan made the experience 4.5 stars. My only comment regarding improvement, is that I was surprised to book at one location, then be redirected to Maui Smoke Shop for pick up. Scoped it out the day before and Ivan did a first class job of making sure everything ran smoothly. Thanks for asking!

I have good experiences all the time with Uhaul but this was one of them. I was charged for insurance ($112) when I made it clear I didn't want it (I already complained about this and am told it will be taken off) I was also charged for cleaning ($25)when the kid who checked me in assured me it was clean enough and that I didn't need to clean further. And to boot, I was charged for 4 days when it was 3 ($29.95). Should also be noted that the same kid that checked me in said he wasn't going to charge an extra day, even though he would have no right to anyway. I was surely there before 11:30 am on the 14th. Altogether, I was overcharged $166.95, and my account is overdrawn ($33)because of it. That's $199.95 I'm down. Quite dissatisfied and not sure how I'll be able to get a truck for a job we have Friday. I'm a mover and use your trucks often. This makes me extra frustrated as a frequent customer. Does anyone at Uhaul care?

Wash the truck and include the equipment! The can smelled like smoke, the windshield was dangerously filthy and the wipers too dried out to clean it, the dollies ordered were not present, there was garbage in the back, and the rear door was so stuck we needed another uhaul place to dislodge it so it would close. The only reason I chose this place was because of its proximity to the locations in the move, but we ended up driving around to get our reservation fulfilled anyway, and with that and the time on the phone with Uhaul, we lost over an hour of the reservation timespan.

Everything went perfectly! Location was ideal, checkin quick and easy, return just as simple. Thanks!

Maybe explain the check up or service done to the truck

The "location" is actually a smoke shop, that also does U-haul rentals. Made for a funny exterior photo. The knowledgable staff inside was very competent, and very friendly. I picked them because of how nice and pleasant they were to deal with on the phone. Would definitely recommend them for a pick-up. Besides the product in the smoke shop is pretty interesting to investigate while you're being processed.

Tires out of balance

The store associate was very professional, pleasant and friendly. I would definitely recommend that store and have already.

Over all my experience was good, particularly with the employee being so helpful. But the unit was dirty when I picked it up, so I swept it out at the house. I only needed it for a short in-town move, so it worked out well.