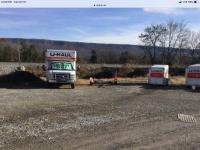 they were rude, the lady was having full on conversations with 3 people while i was waiting on her to "check" if another truck was available.they also closed 15 mins early when online and a uhaul rep that called said they would be open till 6 pm. i got there at 5:40pm and they were closed. the serial number for the appliance dolly didnt even match up with paperwork and they said that its fine and to let the drop off location know. they also open at 10am which on moving day isnt early enough

There isn't much to do to improve. Their hospitality alone was addictive to our family ðŸ™ðŸ‘ðŸ˜ðŸŽ‰ðŸŽˆðŸŽŠðŸ’–

Knowledgeable,staff poor reservation system, staff having to do work around with personal devices, customer information is not safe. U-haul should have better system in place for rental provider.

This is an excellent place to rent from! Gabe was the best help a person could ask for, professional, friendly service!

Everyone was very nice. The truck was clean and ran like a Cadillac.

Clean the box between uses. There was fiberglass insulation still in the rear of the truck from a prior use.

The staff greeted all of the customers other than me, including customers behind me in line. They never gave me paperwork in person, and just told me they'd send me a receipt later. The receipt was inaccurate and overcharged and they never responded to my inquiry regarding the error.

Nothing. They were great people.

I chose truck share to pick my truck up online . It didnt work for me. I got to the store, had to wait until they opened and helped another customer rent their uhaul before I was even told the store wasnt set up for online truck share. Lucky the movers I had coming to help were later than when I finally got back with the truck.

Did not give receipt or contract for a cash transaction. Not even an email. Not really sure how much was for the trailer and what was a deposit. All I know is I got back $60 dollars out of $300.00. Far more than what I was quoted on your website.

Had to drive many extra miles to pick up this truck as the local location was changed. Cost me extra

I rented the truck online. First I was to pick it up two hours away. Then I was to pick it up in Chattanooga. Then it was finally assigned to Trenton where I had requested in the beginning. After I got the truck I hooked up my trailer lights and the blinkers wouldn't work. Called for roadside assistance. Was told it an extended time. I finally found a blown fuse for the pigtail and fixed it myself. Called to cancel roadside. Then when I returned the truck I found out that my reservation was cancelled instead of roadside. So then it took approximately an hour to get that straight and return the truck. I then checked my bank account and I had been charged twice. I then called and spoke with a representative and he stated I would be credited back 431.42. I was not I was credited back 424.79. This was the worst uhaul rental experience ever!!!!

I am 66 years old I rented a 6x12 enclosed from Trenton Ga from a stir it was Something and Salvage, but after I paid for they said it's out back, so I drove and found it, the young was in the dirt and I could not lift it up I when back in the store and the told me it was Uhaul policy not to assist in hook up due to liability, eventually they got a forklift to assist getting it out of the dirt and told me not to tell ANYONE that they assist me or they would loose their license. When I got to drop off, because of the hookup issue I parked, unhooked, and went in to check out and the lady said were your trailer I said I parked it and unhooked it, she said we are the ones that do that then I told her about the hookup she said to make sure Uhaul knows about this. SO HERE IT IS WILLIAM SMITH

Very dissatisfied with my experience! Location was fine. But U-Haul needs to work on customer service. What should have taken 20 minutes (TOPS) was over 2 hours. Would not recommend UHAUL TO ANYONE!

. My problem was with uhaul itself. I made a reservation online my pick up location was moved I was never notified. I was told that I had been text and emailedof this change. But I never received either. I didn't receive emails and text of other information before and after. This cost me several hours of move time and help. Not to mention the anger and frustration of the whole experience. Moving is hard enough without my moving van company making it exceedingly more difficult. I had a great experience at this location. The staff was kind and sympathetic. And got me on my way quickly.

Load the trailer and then unload it for me........just kidding

Since I been picking up u hauls at this location, I am extremely pleased, I am a regular customer here, and this place has excellent customer service!

U Haul should not allow this location to operate. Took over an hour to get the truck, then they put a trailer hitch on the back (which i did not order) and charged me for it, which i just cleared up on the phone with 1 800 go uhaul. This was the worst experiance I have ever had picking up a U Hual.