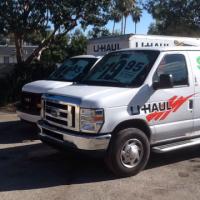 No one was there to let us in or get the key for us when the reservation said the location would be open. We had to call customer support and get the lock box code (which was not provided to us in the reservation email or any other correspondence) from the agent. The agent Shezeila was very helpful though and managed to get us through this ordeal.

Lock box was broken, I was lucky a uhaul employee happened to be in the parking lot and she helped me (her name started with "Sha" I think... Shanay maybe? I wish I remembered because she saved my evening, along with a girl named Francesca too). Self check in also didnt work, and the two dollys I rented werent available.

Very poor experience! After arriving at the pick up location 15 minutes early to ensure we had lots of time to complete the mobile pick up of our truck, THERE WAS NO KEY IN THE LOCKBOX. This location (not our chosen pick up location) is not an office, but rather an industrial complex with no assistance available. We called the uHaul number immediately to get help and were met with a 30 minute wait time for customer service. The live chat option was able to respond quicker, however there are so many different agents reviewing it that we spent more time explaining our problem than reaching a solution. The agents continued to provide the lock box code and couldn't understand that no key was there. We finally received a different telephone number and waited on hold for a few minutes. A curt agent said she would look into it and transfer me to someone who could help, I was transferred to the main U-Haul line again. I called back and waited on hold again, speaking to yet another person, I explained our situation again, answering the questions like can you see the lockbox?, do you know the code?, what do you mean there is no key?, it should be there. Frustrating as I'm sure anyone can agree. Again, this lady said she would transfer me to a new person, a district manager, to assist. The district manager was the only helpful person in this entire situation, quickly apologizing for the error and providing a solution. All in all a 45 minute delay in picking up the truck, at a location that was forced upon us 30 minutes away from our apt in downtown Toronto (when I booked 2 months in advance of our move), very unhelpful customer service. As someone who plans adequately in advance, I thought this would be the least stressful part of our big move into our first house, but turns out this was the most stressful part of my day. I find it very disappointing that uHaul prides itself on being the preferred truck rental for moving and yet doesn't plan for increased business volume at the end of the month when everyone moves. I would like a call from someone to discuss appropriate compensation for my experience.

I paid for a moving dolly and it was not included with the truck. The location was closed so there was nothing I could do about getting one. Head office told me to call the location to deal with it. I called multiple times but they don't pick up the phone and have no room in their voicemail inbox to even leave a message. I am talking to head office now and they are going to refund me appropriately. I figured it is still valuable to submit this review so Uhaul can investigate the issues at this branch.

HORRIBLE! we tried to pick up our 10ft truck here after being sent to this location from the original location where I had placed my order. Waited here for 1.5 hours for the keys no one was here. Had to deal with customer service then charged me twice and also charged me for extra days even though I dropped off the truck the same day (4 hours after I picked up the vehicle) Worst experience!

Actually come through with services listed on your website. Not change reservation details at the last minute. Not take advantage of desperate people.

Terrible U-haul experience. The password of the lock they gave at the back of compartment did'nt work. And the staff and customer service did'nt know the right password.

I booked the equipment at 7:00 a.m., however, the staff of the place leaved the car open but without the keys, according to the app the keys have been supposed to be in a lock inside the car but it were not. I lost 2 hours because I had to wait until 9:20 a.m., to someone of the place arrive and give me the keys. Furthermore, I was pay for a half dozen of Furniture Pads, but in the truck I just found 5 totally wet and dirty, but U-Haul charge the amount of the total dozen

I was quite satisfied with UHaul's online and in store services. It was easy to pick up and hassle free to drop off.

It was great customer experience. Staff was kind and helpful. Even after facing uhaul computer problems, staff managed to complete my transaction successfully. When i requested for windshield brush to clean snow, uhaul rep borrow me brush from her own vehicle - i.e. amazing response.

They didn't have any dolleys or additional equipment, and I had ordered a furniture dolley for the job i had to do... the girl on the desk gave me the 7 dollars in cash, but a little annoying to be given the option to get that at this location when they have none (also paid tax on the rental of a dolley on my credit card, which is not much extra, but I shouldn't have paid for something at all if it was never there). Gas was also lower than was stated and I submitted a photo of that but looks like I was charged for the fuel up to the amount they stated and not what was there.

There was some confusion about how to gain access to the truck. I wasn't given a code and the staff had to spend half an hour figuring it out. I called customer service as well and they didn't know either.

This location is in a kids play zone. I try to get someone yesterday to return truck for me but the location was closed at 4 in the afternoon with no note on the door or answering machine that they would be closing early. I also try to return truck on your website but because I was not at the location I could not. I had to drive there even thou I had some else return truck, wasted 2 hours of time.

made an appointment to pick up from location at 6 am. appointment was approved and accepted for 6am with 24/7 pickup. got to building at 6 am to pick vehicle up and the location wasn't open until 10 am. called a representative and all they did was say that it is their fault and change my appointment to 10 am. the late pickup really messed up my move.

Not the best experience at this location. As this is a third party, communication was poor. The person at the desk did not know what she was doing. We repeated several times that we already checked in online and showed the confirmation and we just need the key. She said she has to call her supervisor. We had to wait until the supervisor arrived. I told the supervisor once again we're already checked in and she gave us the key right away. So really there was no point in us waiting. Upon return, their systems were down and they couldn't sign us out at the location. I had to call Uhaul customer service. They tried walking me through it online but the site wasn't working and kept sending me on an endless loop. The Rep on the phone kept saying she can't sign me out and I have to do it myself. After saying several times that the locations systems are down, she said the location can just take down the mileage information and sign us out later. I've called Uhaul several times after to confirm I've been signed out and I kept getting the same answer that the system at the location is down and it hasn't been entered yet. Finally I just got off the phone with the location and she confirmed its been entered. Upon receiving my final receipt I noticed I was charged $42 for fuel when I only used 30 miles. So this has been disappointing as well. Overall not a good experience and I wouldn't recommend. Thanks

This is not acceptable they charge me double of price for only 7 hours 23 km I drive. Shame on your service!

Mileage was entered wrong. We were billed 6x what we actually owed and it has been 3 weeks trying to get our reimbursement. Do not rent from U-Haul.

Actually charge your customer for what they reserve.

THE CUSTOMER SERVICE PERSONNEL WAS VERY OUTGOING AND ENERGETIC.I KNEW I WAS GOOD HANDS!

I had booked a truck for June 29, at 10am. My husband and I were there at 9:45am and we found only an employee on her first day. Do you know what time the manager showed up? 11am By the time, I went back to the location where two helpers were waiting for us, it was 11:30am. What kind of customer service is this? I had to pay those helpers from 10am. I have used u-haul before and I had not this bad experience. I always went to the location on Cartwright and I had great customer service. I was disappointed I had such a bad experience and I wasted more money because I had to pay those helpers who were waiting for us to come with the truck. UNBELIEVABLE. Mrs. Paula Rollo