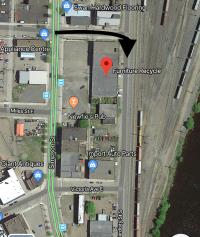 very happy with rental and service

It would be great to have humans there during scheduled business hours. We waited 10min, then banged on the door, before calling customer service for guidance. Tell customers that there won't be a human present if there won't be and give them proper simple instructions on how to do the self check in process. Update the website. Website was extremely slow. We sat there for 30min trying to let it loud, retrying after 2-3 min each time. We finally gave up and drove to wifi to try to help it, then had to drive back. Lubricate lock with temperature appropriate grease so they don't freeze up. We had a heck of a time warming it up to free the thing. Have a number on the door for immediate local assistance for after hours issues. Scrape off the snow if possible, especially on the truck identification number for customers who don't know where to find the number. Change the gps location of the front door so customers don't have to run down the road to the next building to be â€œlocatedâ€ at the â€œcorrectâ€ location. It took us 2 hrs to finally get the truck picked up and on the go. It was very frustrating.

We had an awesome experience with the use of your 26 foot U-Haul truck. It was very clean and it was an overall good feeling to know that the truck was relatively new only 60,000 km on this truck, all around it was a good experience with absolutely no issues.

Be careful with the entrance door to the Hardisty St location. There is a metal strip on the door that busted my knuckle open and caused it to swell up right before my huge move.

Should not have been charged 20 dollars for after hours, especially when they close early on Saturday. I brought the trailer back just after 6 o'clock and i could have kept it until 1130 the next morning.

One of the most challenging drop offs I have ever had. Offered help when backing up the trailer but was more of a hinderance then a help (I'm a truck driver by profession and appreciated the initial help but soon was more of a nuisance). It became more of a problem while I continued the drop off. Even though it said on my contract to drop off there they weren't wanting me to drop it off (made me feel like I was lying to them)

There was broken glass on the inside of the U-Haul which while not their fault might have been good to check. The tire pressures were brutally low and the adjustment knob was so sticky he had to spray it with WD-40 and work it back and forth So it would tighten up on the ball. I would think these are things that should be inspected regularly BEFORE a customer picks up their rental unit.

Proprietor was friendly and helpful.

The staff at furniture recycle were very friendly and helpful.

The guy at working at this location was great enforcement do the circumstances I feel like I stress him out. You can really help me with my situation as I had to drop off the U-Haul and go directly to the airport but he was nice. I was unable to pay in that moment because I had to leave and he kept saying I had to pay before I left which is kind of true but also not really cuz if I would have dropped it off overnight I would have to deal with the car right away so there is that. I do apologize to that died and I hope you didn't get in too much trouble or any since I was a very overbearing and took controlthat situation rather heavily. The problem I do have is with my bill. Not a huge fan of the "cleaning bill"of $2,000. That's a little vague for a large amount of money and I have no idea what it's for. Also I didn't realize that I had extra mileage or when that would incur as I didn't have any conversation with the staff member when renting it about the extra cost at mileage since I was dropping it off and it location at thunder Bay and thought that was included. If there was at your mileage he didn't mention anything about it that could be in the contract that I had but upon seeing it on my bill it was a surprise to me. So yeah the guy was nice but I dealt with but not a fan of how the bill was explained to me which it wasn't. Oh yeah one last thing. When I rented the vehicle I was told I had one month free storage upon my arrival in thunder Bay and I even called Aiden to thunder Bay and asked if there was storage and I was told yes. When I called a second , just to make sure as I was approaching my arrival, I was told that there wasn't storage. You can see my confusion comes in. So yeah not a huge fan of that whole thing FYI.

The cost was not fair at all. They calculated without using distance and charged me twice and It was too expensive

Your online website is not accurate as far as truck availability nor is it always accessible for pick up and drop off online. This part was very frustrating. I had asked for 12 blankets ahead and only 6 were available. Did give us a break on price though due to issues which was very kind.

I had so many issues while trying to get my Uhaul and I even ended up not being able to get it. After I was on hold for a total of an hour and a half with 2 different phone calls, the girl didn't cancel my order and still charged me for a truck I didn't use. I will never use Uhaul again, the service I received was unprofessional and down right terrible.

Dolly was not in uhaul, then was told to go to multiple locations for one causing extra charges in mileage that was NOT needed...note on file to be disputed for extra UNNECESSARY KMS

The lock was a little hard to unlock as the door/lock lever was keeping the shackle from opening. other than that and probably my cell phone/thunder bay cell service, I had problems trying to pick up truck and dropping off via using the APP.

Our experience with Uhaul wasn't great. On Easter day, we found out that the only way we could get our Uhaul and car tow was by smart phone. We didn't own one and it being a holiday in the middle of the pandemic we weren't able to locate one. This meant our driving 200 kilometers to get to a location where someone was willing to assist us. He was very accommodating and helpful. The most frustrating part is my wife called several times in advance of the move to make some changes and to ensure that the service would still be available. She was repeatedly told that Uhaul was an essential service and that everything was organized. At no time in any of these calls was she told about a smart phone. Due to these mix-ups we were late getting to our destination and had to rent the van an extra day. Another employee that was very accommodating was Susan Chura, she gave us a $50.00 refund and did her upmost to help us. But no at this point I wouldn't recommend your service because you never gave us advance notice about the smart phone.

During drop-off, the app would not allow me to continue after taking a picture of the dashboard. I'm assuming it's because it's uploading the picture in the background without telling the user and the internet is terrible at that location. I would ask that you show a progress bar to the user while the photos are being processed. Further, it would help to set up free WiFi to allow the App to function correctly.

Everything was great very nice staff

Stop this half tank of fuel crap. It is a poor system that is a pain in the ass. So much easier to receive a unit with a full tank of fuel and return it in the same state.

Make sure your locations are confirming and preparing their reservations better. The first spot I had booked didn't set up my rental and I was left calling customer service multiple times to have a truck arranged at the time I was supposed to be using the vehicle. I had people scheduled to assist in my tasks, they had to wait for me to get settled and it was a big inconvenience all around. I will be reluctant to make U-Haul my first choice next time. Once I had the truck, however, it was fine. Everything went as planned. Thanks, Allan

Truck fuel level should always be on full

Weekend rental and had to use 24/7 online check in which was an absolute nightmare. Did not work properly at all and had to talk to several customer service people to get the right one to fix the crazy problem. Horrible system. Will never rent from uhaul again.

Engine light was on. 3/8 gas (less then half tank) and the sun visor was broken Checkin took 1.5 hours and checkout 30min+ Said he didn't know how to do so I could pay debit.