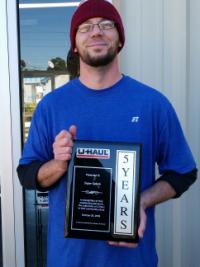 I would have liked a phone call the day before like I was suppose to have received and it could have saved myself and friends time on when we were suppose to load. I had to guess on location and pickup time.

I locked the keys in the truck while it was running so providing an extra key would be a great idea!

there is something wrong with U-Haul's website because it would not pull this location up as a choice. I knew it was there and it was the most convenient location for me to pick up and drop back off. I had to call him directly instead of using your website. Gentlemen running it was very professional, helpful, etc and you should send more customers his direction... fix it where he is an option when entering "Texarkana"... never came up even after scrolling through 4 pages and other towns even starting showing so I knew something was wrong.

It was horrible getting a truck. Like truly awful!!! And returning it was the same

Although I would go back to this location, just need to mention one item of discontent. I had ordered 40 blankets for this move. He only had 18 (3 sets of 6). Just because he didn't have them at my pickup location is not my problem. I ordered 40 blankets well in advance so UHAUL has no excuse for not having them. They did make it right when I returned the truck. But the pick up location had no business charging me for the 40 blankets. Out of the 18 blankets I rented I lost one and paid for it (which is fair).

I reserved a 10' truck with dolly for mobile pick up at a preferred location 2 weeks in advance but at the day of pick up my reservation it was in a different location, was not applicable for mobile pick up, i was given a 15â€ instead and does not have the dolly i requested even though i was still charged for it. I did not receive any emails or call regarding this changes. With their phone agent's help, (Marvin) they were able to change my reservation for mobile pick up but this process took an additional 1 hour. It's the first time i encountered this inconvenience and hoping for better communication next time to avoid delays.

We rented a dolly and before we got a mile down the road the whole light fixture fall off. I called U-haul after hours number and was told to buy a temporary light but the lady couldn't tell me if I would get my money back. The gentleman who rented us the dolly was very professional and the dolly was clean.

I did the after hours drop off so no opinions

Brandon was a lot of help making sure I got exactly what I needed, He was very respectful and will use him again in the future!!

The dust cover on my truck was dragging when I returned the trailer. The young man pulled off what he could but was unable to get it all out from under my truck. Today, the temp was 108 and the heat index at 116. A true gentleman.

The appliance dolly was not available on the date/time specified in the contract. I need my money back.

Your manager likes to bug people and don't want to give the people what they ask for. But wants to push on them what he wants them to do

I rented a trailer to tow a car 70 miles. The amount doubled when I changed location and the trailer had light bulbs hanging off of it in the rear when I picked it up. The jack only worked to load the car. It would be longer work to unload the car. When I dropped it off the guy had to beat it with a hammer and finally just had to get help to pick it up off my hitch. The experience was beyond ghetto. $140 wasted

Not a thing!!! Everyone who has been evolved from beginning to end has been more than wonderful to get through this process!!! Only one thing, my name is spelled Linda Bauldwin, but is often spelled incorrectly because the spelling of my name is so unusual. I will spread the word and always use you guys because of the wonderful way that you took care of me. You guys are the best, hands down.

I reserved a 17 foot truck a week in advance and it was sitting on the the lot when i got there; however I was told that I'd be getting the 15 foot truck b/c one of their "frequent customers" wanted the 17. I left a few things behind in Texarkana; some that i had to give away; some other things I will have to spend money going back to pick up. This experience w/the truck was very bad. The folks on Jefferson that provided the Car Dolly were much more professional.

We rented an eight by ten covered Traylor to go one way and after we got it loaded we noticed one of the four tires was flat. That caused us to have to delay our move until the next morning. The service man did come out the next day quickly and was extremely courteous but he said that this particular location had done this several times before. We had good experiences with U Haul but I would not return to that particular location. It made our 330 trip very hard for not getting on the road the day before.

Don't lie to the customer about fees and other policies.

Brandon the sales associate was extremely helpful. He explained the rental agreement, helped with the attachment of the trailer, and verified if there was any existing damage prior to rental.