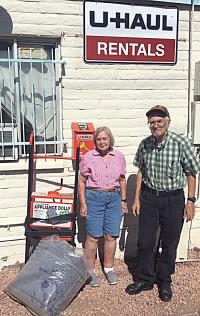 Smile and b happy

I was supposed to drop off my truck to the location on Hayden and 202 but was called by the personnel there and told to drop off at the Curry Mini storage around the corner. I left it there as I was told and then I was charged a $20 after hours drop off charge.

Hole in the wall.

They kept me waiting for an hour while trying to process my credit card, then read all of my credit card information over the phone to a stranger, I think their grandson, then he charged me... isn't that illegal? I then called uhaul to complain and was told I would be contacted and have false charges that the lady on the phone admitted were false, reversed. Next stop Yelp and the Better Business Bureau. All I wanted was a response from you guys.

The people were so sweet and helpful. Before this experience I did not really have any emotions, positive or negative, toward Uhaul, but now I really enjoy it. Thumbs up! Cheers

The location was fabulous. It is Uhaul that I can do without. I asked for a specific location and received at least 3 phone calls with different locations. I had to go much further to pick up the truck and asked for a discount on mileage as we would not be going far. Someone did finally call me back and gave me some free miles. I rented and paid for the truck for 5 days, then received a phone call the very next day asking when I was returning it. THEN, I received a phone call from the new territory dealer manager informing me the pricing was very incorrect! THEN, we were told to return to a closer location which was incorrect (according to Uhaul traffic office) Then when my husband dropped it off, he was held for ransom as they said we had a $120 late return fee (we were early!). The total bill was $150 including taxes. For your sanity, never use Uhaul!!! If it were not for the absolutely lovely lady at the Curry St location, we would have lost our minds.

People at this location were awesome very helpful friendly courteous loved it.

Owner was very friendly and accommodating

Explain prices better when customers ask for extension. I feel ripped off. Probably will never use uhaul or recommend again after my experience.

Everything went well and was a smooth transaction. It is so nice to have an easy rental after the stresses of moving!

You advertise $29.95 but by the time I was done it was over a $100.00 which is ridiculous! You should add the fees in when you advertise.

The lady at this location was very nice.

I reserved online opted for no insurance when i got there they put the insurance charge on the contract. The truck was not on full. Was noted as it was when i told them exact words were " nothing i can do about it." Pleasant lady just caught me at the time of need so i accepted the poor experience. Wont be a next time.

I have rented from U-Haul for many years and have never had a problem until now. 1. I spoke to Jim Sunday and Monday. Sunday he was abrupt on the phone. He was better in person. 30 minutes before I arrived, I called to let him know I needed a second day. When I got there he gave me the bill. Several minutes later he told me he forgot to add the second day, so I got the more expensive bill. I realize people make mistakes, but I also feel he should have honored the first bill because I was on the phone with him only half an hour earlier to add the second day. 2. When I inspected the truck for damages, I was so very surprised at how much damage there was and so few Xs on the truck. Long slash marks were on both sides of the truck, as well as dents, and again no Xs. 3. As I drove, the engine was so very noisy. Again having rented Uhaul over the years, I knew it was a very old engine and in dire need of replacement. 4. The window was filthy dirty. I used the windshield wiper fluid and the left wiper was half peeled off and flapping in the Wind. Before I drove off, I was given the inspection form to inspect for damages. Employees themselves should also inspect for wear and tear on the trucks and make the necessary repairs. 5. I then had to go back into the store and ask Jim how to release the brake because I could not find it anywhere. I've never before had a U-Haul location put the brake on. 6. None of this should happen at all given we are paying customers.

Originally thought it was one of the official pick location down the road but it was a quick pickup for my uhaul reservation. I would recommend an official pick up facility if ordering additional moving supplies but since I just required the truck, it fulfilled my moving needs.

The express/self check in was incredibly frustrating to use, seemingly because of software issues. The mobile site kept automatically reloading forcing me to start over. What could have be done by a person in 1 minute took 1 hour. I would be hard pressed to use the self check-in ever again.

This is simply not what Ivexoected from UHaul

When I checked in the Uhaul, the woman did not give me a cost breakdown or estimate. I was incorrectly charged for damage protection (SafeMove) and I did not elect that coverage. I have yet to hear back from customer service about the charge.

This place was super sketchy. The people running it are so old they can't use a computer correctly. I'm pretty sure I was charged over what I should have been. Never use this place again!

Everything was great, very friendly man helped us with the truck, in and out very fast.

We were supposed to get a 10 foot truck. None available. Gave us 15 ft for same price. NOT! When we went to pick it up they didn't know anything about it and charged us for the 15ft truck.

Truck was dirty, but the employees were friendly