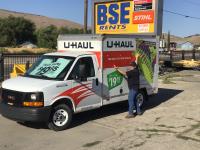 Would prefer to fill fuel tank to full.

I had rented a dolly and when I picked up the truck I was told they didn't have any. It would have been helpful to have known that earlier so I could have made different arrangements.

Overall our experience was just okay. We reserved a car dolly in Bakersfield to pick up at 9am, we had some trouble that morning and didn't get there but 9, we were headed to the uhaul location around 10, the uhaul person called and told us or reservation was canceled! We didn't cancel it! So then we had to make a new reservation but it was 40 miles away in Tehachapi, fortunately we were heading that way on our trip so it wasn't out of the way, but it was still very annoying to get canceled on, uhaul should have called us to let us know they were going to cancel or reservation!

Again, we were redirected to two separate locations over two DAYS to find a location excepting truck returns and Uhaul.com sent us to a CLOSED return location the first time. The app again froze up and didn't allow after hours returns AT ALL. I called customer service and they assured me the app would work when I got in front of the second, hopefully opened, return location. It did not. Fortunately the staff at BSE RENTS in Tehachapi was exceptional and got our truck returned properly and our invoice processed on the second day. I would not recommend Uhaul based on this experience. We ended up paying $193 and used the truck for only 10 hours and 60 miles (it should have been 45 miles but all of the location changing last minute by Uhaul added 15 extra miles). That is not a fair price and it was not good customer service, nor a good experience.

They charged me without my permission for something that was not included in policy, my agreed upon purchase, and my authorization, I will never use u-haul again and am currently fighting with my bank to block any transactions from this fraudulent location.

Pick up and drop off was very fast and efficient. Truck ran perfect with no problems but it was not clean inside at all. I went directly home and cleaned the interior with a disinfectant cleaner to remove the coffee or soda that was all over the cup holder and armrest. Dashboard and console was so dusty i could hardly read the gauges

Very friendly staff, both inside and outside. There was an issue with the system not processing the contract information as the dispatch location. The woman inside person looked at the dispatch document and corrected the issue. Very happy with this location.

You guys did great

The â€œgentlemanâ€ that waited on me when I returned the truck this morning was rude, defensive and quite frankly, an ass. His name is Terry and it was at the BSE location in Tehachapi Thanks, V

Upon checking in our vehicle, I simply asked about the gas tank because we had filled it back up to the level at pick up, the clerk basically told me he was sick of hearing people complain about it and that we should over fill the tank to get the same level upon returning. He was rude, we were tired and it did not refect well on BS&E rentals.

I paid for a two day rental I was told I had to have truck back in one day. I called the number under BSE to talk to them. that Number told me they couldn't do anything I had to call a different U-Haul number. I called the U-Haul number was told yes I had a two day rental. When I went to return the vehicle I was told I was a day late. I told him I called the number for them and was told I hadn't called them. That I had called U-Haul number. I was told they did me a favor and did not charge me for the extra day. I had paid for two and then used less than two Days. I fail to see where anyone has â€œdone me a favorâ€ by giving me what I paid for. I will try to use a different company the next time I need a truck.

If other uhaul places were like this, you could overwhelmed with more customers and less complaints

Dropped off vehicle. Owner wrote down mileage wrong and threatened to charge me an extra $1000. Very rude. Will not recommend.

The two workers I dealt with were extremely welcoming and made the return process so easy. Walked me through everything, even shared a few jokes.

Keep on doing what you are doing. I appreciate the ability to get this service on short notice. The staff is always friendly and helpful.